Cebuana social worker Mingming Evora is a regional leader of Plan International, a global charity for children and poor communities
By: Monica Feria - @inquirerdotnet
Philippine Daily Inquirer / 02:15 AM May 29, 2011 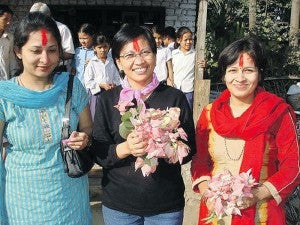 On her first assignment abroad, Myrna Remata Evora was greeted by death threats and obscene phone calls. A social worker for an international charity organization, Myrna had been sent to Indonesia in 1991 to rationalize the organization’s programs and trim the staff.

She even got a call saying she should go home immediately because her husband, an engineer working in Saudi Arabia at that time, had died. It was not true, of course. Another caller (a foreigner like herself) told her, “You do not know who I am, and you are only a woman,” she recalled.

But disgruntled staff members may have underestimated the firmness and determination behind the pleasant smile and gentle manners of this Cebuana native, called Mingming by friends.

Mingming, a product of the University of Southern Philippines who honed her social organizing skills in the slums and leper communities of Cebu, waited it out.

The threatening phone calls eased up after three months. In six months she had a leaner staff and new programs in place. Mingming, who also holds a Master’s degree in social work from the University of the Philippines in Diliman, ended up staying three years in Yogyakarta as a field director for the US and London-based Plan International (Plan), one of the largest charities serving children and depressed communities in the world.

“That was my first and most difficult challenge,” says Mingming, who went on to posts in Bolivia and Sri Lanka before moving to Bangkok to take up the job of regional director of Plan, supervising multi-million dollar charity projects in 14 countries. At the time of this interview she was preparing to take up a new post in Bangladesh where the organization planned to set up one of its global virtual schools to train social workers and staff in a unique Child-centered Community Development (CCCD) approach.

International social work involves big money. Donors from all over the world trust charities to see to it that their money really goes to helping the poor and not to overstaffed bureaucracies and graft. One has to learn to deal with political requirements (sometimes pressure) from local governors regarding certain projects, notes Mingming.

Mingming says many of her aces, she learned while growing up in a poor family in the Philippines. For one, “pakisama (the Filipino trait of social adaptability),” she says. In Indonesia she wore her hair long like the other women, learned Bahasa, ate what they ate, and acquainted herself with their social rules. In Sri Lanka she came to work in a sari.

But pakisama, here or elsewhere, says Mingming, only works when people see that you are genuinely sincere in showing your solidarity. In Bolivia, she loved their milk and cheese, but candidly admitted to her Bolivian friends that she didn’t really like the taste of lamb. Pakisama is not “pakitang tao” (just for show). If you are just acting, sooner or later lalabas din yan (it will come out),” she says. And of course, it has its limits, too.

She also learned early on that being poor did not necessarily rule out being respected in a community. “My parents were teachers. We were poor. We did not own our own house,” she recalls. She and her siblings had to help care for the pigs in the backyard to earn their school tuition money. 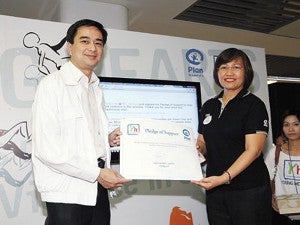 “But I remember, officials were always visiting our house. We learned to face all sorts of people—the rich and powerful as well as poorer residents,” she retells.

Mingming remembers this when she meets people who seem to discriminate against representatives or employees from poor countries. Like many Southeast Asians, Mingming is prone to be non-confrontational. But she says her parents had given her an inner confidence that allows her to stick to her guns.

Mingming was in charge of Plan projects in Sri Lanka when a tsunami struck, killing over 30,000 villagers. Plan helped build over 250 new houses.

There were many donors from all over the world who wanted to help, she recalls. A lot of money was pouring in. At one point, Mingming noticed that there were more pledges for houses than there were families affected. Some houses were also being planned in places where there was no water and electricity, and were too far from the residents’ places of work. Construction was going on at such a fast pace, that some of the bricks used to build houses melted at the first rain.

Mingming put a stop to it. She even turned away some donors. “It’s my job to tell them the truth, even if it means accepting some initial shortcomings of our own, or antagonizing the local government or construction industry,” she says.

Being in charge of other people’s donations can be stressful work. But Mingming says the satisfactions of social work still outweigh the anxieties.

Despite cultural differences, the look of poverty is the same everywhere, she says. “You see it in the eyes of poor children in any country.” It’s an expression that has never failed to touch her heart and those of many people throughout the world.

“How can I complain about the weather or the food or my work problems when these people are worse off than me?” she muses, adding that social work is “a very humbling experience.”

“It can also be frustrating. Some people think some poor people don’t seem to want to help themselves.” Well, she says, this is why social work needs to be professionalized. There are ways of helping poor people help themselves, she says, adding that people need to be given help with their dignity intact.

Plan International, she says, endorses a rights-based approach to development and is focusing on children. It also keeps an eye on gender and environment issues when approving projects.

She has grown as a professional during her experience abroad. She says she hopes the Philippines will be her last post, so she can better share everything she has learned with communities back home.

Her advice to other Filipino social workers who may find themselves in similar jobs abroad: Be yourself, be sincere; it’s your best asset. But also, upgrade your professional skills, be consistent and deliver…”

Pursuing a global career has kept Mingming away from her family for long stretches of time. She gives thanks to strong extended family support for helping her weather the stresses of long-distance mothering. She also thanks her children, who have accepted her as an overseas career mom. 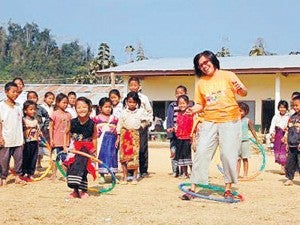 In the beginning, she took her two children along with her. But when they were in high school, and after seven changes of schools, the children themselves chose to stay behind. When she took off for Bolivia in 2000, she had their blessings: “Ma, you go. We stay. If you don’t go you will always say, what if… We also don’t want to see you wasted’” she recalls her children telling her.

“Communication is important,” she advises other overseas moms. Her children also visited her in her place of work twice or thrice a year.

For mothers, there are pros and cons of working overseas. But “it can be done,” she says.

Mingming shares (with the permission of her daughter) a heartwarming note: “Dear mom … I hope that when I become a mom myself, I’ll be like you—able to teach my kids the value of the peso but being generous and kind-hearted as well. I hope my kids will grow up responsible din (also) and ambitious…Thanks for everything mom! love you!”