MANILA, Philippines—A high Chinese official has made the assurance that the Philippines-China territorial dispute over the Spratly islands will not adversely affect relations between the two countries.

The conciliatory words were uttered by Jiang Shusheng, vice chair of the 11th National People’s Congress of China, to Vice President Jejomar Binay when he paid a courtesy call on the latter on Friday. 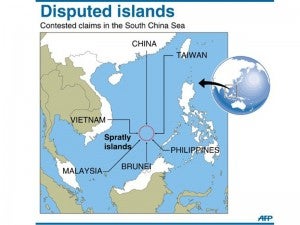 Binay said his meeting with Jiang touched briefly on the Spratlys issue and that both agreed that incidents connected to the issue should not become a thorn in bilateral relations.

“We should keep a friendly atmosphere and in handling this situation, we should always keep in mind the relationship between our countries and our peoples,” Jiang said in a statement.

The Spratlys, a reputedly oil-rich chain of  islands and reefs, is claimed wholly or in  part by the Philippines, China, Malaysia, Brunei, Vietnam and Taiwan.

China has insisted it has sovereignty over the entire archipelago—which the Chinese call Nansha Islands but which everyone else refers to as the Spratlys—and has moved to “enforce” its claim from time to time by flexing its military muscle in the area.

The most recent incident  was reported last week on the eve of the arrival in Manila of Liang. Chinese jet fighters had reportedly intruded into Philippine airspace in the vicinity of Reed Bank, part of the Kalayaan group of islands in the Spratlys that the Philippines claims.

Initial reports said the fighters were Chinese. But the Armed Forces of the Philippines  said it was still validating the report even as it conceded that it had no capability to detect and intercept the jets.

Malacañang had earlier said that the Philippines and China had agreed to hold dialogues on the disputed islands in the South China Sea following a meeting between President Aquino and Liang.

Aquino said he reiterated the Philippines’ position that countries in the region should focus on regional prosperity to ease the tensions caused by the rival claims of China and Southeast Asian countries over the Spratlys group.

Binay took the opportunity to ask Jiang about the status of the proposed “exchange of sentenced prisoners by the two countries.” But he said that no commitment was given by the Chinese official as the proposal was still being reviewed.

The Vice President said that China was looking forward to expanding trade and economic relations with the Philippines, and promoting high-level visits between Manila and Beijing.