Filipino about to lose world’s shortest man title to Nepali 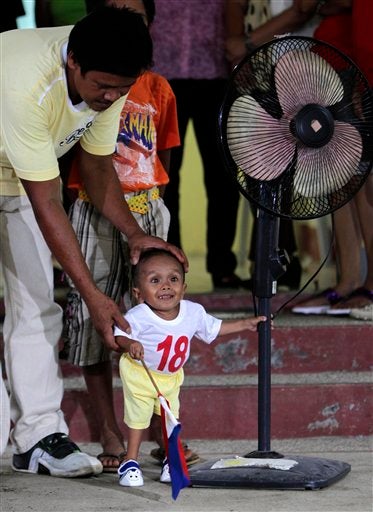 Filipino Junrey Balawing, standing at 59.93 centimeters (23.59 inches or almost 2 feet), is about to lose the distinction of being the world’s shortest man, but he is fading away with flourish.

In the next few weeks, he is flying to Italy to rub elbows—literally, if he can—with the world’s tallest man, who towers at 251.46 centimeters (8 feet 3 inches).

The son of a blacksmith in Sindangan, Zamboanga del Norte, the 18-year-old Balawing will have a photo session in Italy with Sultan Kosen, a behemoth farmer from Turkey. Kosen is said to be one of only 10 confirmed cases in history of humans reaching 243 centimeters (8 feet) or more.

“There is an invitation for the Balawings—Junrey and his parents—to go to Italy (in April). That’s what we are attending to right now,” Mayor Nilo Sy of Sindangan was quoted by ABS-CBN News as saying. It said it would be Balawing’s first ride on an airplane.

But Balawing’s claim to being the world’s shortest man has been challenged by Chandra Bahadur Dangi, a 72-year-old man from Nepal, who claims to stand at just 56 cm (22 inches).

No love for little man

Pilloried by neighbors, laughed at in freak shows and spurned by the women he admired from afar, Dangi has always seen his tiny stature as a curse.

But he is on the brink of life change as significant as a lottery win as experts prepare to test his claim to be the world’s shortest man in history.

Guinness World Records experts confirmed last week they planned to travel to Dangi’s village in the impoverished southwestern valleys of Dang district to measure the pensioner, who says he weighs just 12 kilos.

If his measurements prove correct, Dangi would eclipse Balawing but would also be the shortest human adult ever documented, taking the accolade from India’s Gul Mohammed, who was measured at 57 cm before he died in 1997 at the age of 40.

Dangi told Agence France-Presse that recognition at the end of his life would be some compensation for years of hardship he had had to endure.

“I think things will be better now. I hope that I will be famous all over the world,” Dangi said at a religious festival in Surunga, 280 kilometers southeast of Kathmandu.

“I want to visit foreign countries and meet people from around the world,” he added.

The pensioner, who was orphaned at 12 and has five normal-sized brothers, said he had never experienced romance and is yet to find his soulmate.

“I was short since my childhood. So, I couldn’t find a woman to marry when I was young. Then I just gave up on the idea of marriage. At this old age, I’m not interested in marriage anymore,” Dangi said.

Treated as a toy

The cause of Dangi’s stunted growth remains a mystery although many holders of the “world’s shortest man” crown have suffered from primordial dwarfism, a condition which begins to show signs in the womb.

Dangi said relatives would parade him as a freak at fetes and festivals when he was younger, refusing to share with him any of the cash they earned.

“They would treat me as a toy,” he said.

He was brought to world attention last week after Nepali researchers looking into the history of the Dangi people were introduced to him.

“We walked for several hours and reached his home in Purandhara village. He was living with his 35-year-old nephew and his (nephew’s) family,” said Mohan Dangi, who led the expedition.

“We invited him to take part in our week-long religious ceremony. To us, it occurred that he could be the world’s shortest man,” he added.

At the religious festival,  he was smeared in vermilion powder—which can symbolize power, love or desire in Hindu culture—as fans queued to greet him, offer him flowers and have their pictures taken with him.

Another Nepali, Khagendra Thapa Magar, held the record as the world’s shortest man for a year after being measured in 2010 at 67 cm.

Magar made television appearances in Europe and the United States and was the official face of Nepal’s tourism campaign, which featured him as the smallest man in a country that is home to the world’s highest peak, Mount Everest. Reports from AFP and Inquirer Research