US, Japan closer to moving many Okinawa Marines 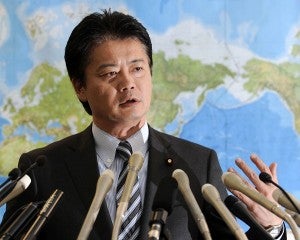 Japanese Foreign Minister Koichiro Gemba speaks during a news conference at the ministry in Tokyo Wednesday. The transfer of thousands of US Marines to Guam will not require the prior closure of a base on the southern Japan island of Okinawa, the United States and Japan announced Wednesday in a compromise they hope will break a stalemate over opposition to the large US military presence there. AP/Kyodo News

TOKYO— Japan and the United States agreed Wednesday to proceed with plans to transfer thousands of US troops out of the southern Japanese island of Okinawa, leaving behind the stalled discussion about closing a major US Marine base there.

The transfer, a key to US troop restructuring in the Pacific, has been in limbo for years because it was linked to the closure and replacement of the strategically important base that Okinawans fiercely oppose.

The announcement Wednesday follows high-level talks to rework a 2006 agreement for 8,000 Marines to transfer to the US territory of Guam by 2014 if a replacement for Marine Corps Air Station Futenma could be built elsewhere on Okinawa.

That agreement has been effectively scuttled by opposition on Okinawa, where many residents believe the base should simply be closed and moved overseas or elsewhere in Japan. More than half of the 50,000 U.S. troops in Japan, including 18,000 Marines, are stationed on Okinawa, taking up around 10 percent of the island with nearly 40 bases and facilities.

The two governments said in a joint statement that the transfer of thousands of U.S. Marines to Guam would not require the prior closure of Futenma, as the original pact required. Details of the realignment will be discussed further, but about 10,000 troops will remain on Okinawa, as in the original agreement.

Foreign Minister Koichiro Gemba told a news conference that he hoped the progress on the realignment plan would help the two countries step up deterrence in the Asia-Pacific region. He also said Tokyo and Washington would continue efforts to eventually close Futenma.

Progress on the issue is important to the United States, which is revising its military and diplomatic posture in Asia — in what is being called the “Pacific Pivot” — to reflect the rising power of China and increasing tensions over territorial disputes throughout the region.

Washington is also under pressure to make the most of its resources as budget cuts loom in Congress with combat operations are ending in Iraq and Afghanistan.

Wednesday’s statement was vague on specifics of what lies ahead. But senior Japanese officials have said 4,700 Marines will be transferred to Guam. The remaining 3,300 would reportedly rotate among Australia, Hawaii and the Philippines.

Pentagon press secretary George Little said from Washington that talks would continue with both sides working on mitigating the impact on Okinawa, developing Guam as a strategic hub and maintaining an effective US military presence in the region. He also said discussing troop numbers and locations was premature as the bilateral talks continue.

Tokyo is hoping the reduction of troops on Okinawa will ease opposition and demonstrate its desire to stand by promises to reduce the island’s share of the troop-hosting burden. Officials say they remain committed to closing Futenma, which the US and Japan agreed to do after the 1995 rape of a schoolgirl by three American servicemen led to mass protests.

But Okinawa Governor Hirokazu Nakaima gave a mixed response. He welcomed the agreement to move ahead with the Marines’ relocation and a return of some of the bases as serving “Okinawans’ desire to reduce the US military presence,” but repeated his rejection to move Futenma to another location on the island.

“A relocation without local consent would be impossible. We want Futenma moved out of Okinawa,” Nakaima said in a statement.

The most likely replacement site, on a less crowded part of the island, is widely opposed on Okinawa and its viability remains a heated political debate.

Guam, meanwhie, has pushed hard for the troop buildup because of the potential economic boom.

“We are the closest US community to Asia. We are very patriotic citizens. And unlike many foreign countries and even some US communities, we welcome an increased military presence,” Gov. Eddie Calvo said in a statement last week.

Guam, which is being built up to play a greater role in Washington’s Asia-Pacific strategy, could also stand to get far fewer Marines than expected if the new plan goes through. The tiny US territory had been counting on a huge boost from the restructuring plan, and may have to revise its forecasts.

But officials said the revised number could be more manageable.

A smaller contingent of Marines would alleviate concerns on Guam that the swelling military presence would overwhelm the island’s infrastructure and environment.

Mark G. Calvo, the director of Guam’s military buildup office, said the territory has been briefed by the Department of Defense about the talks with Japan and supports the transfer, even if it is smaller than expected. He said the idea of reducing it to about 4,000 Marines had been discussed after an environmental impact assessment two years ago pointed to possible problems.

“There are concerns about a loss of economic benefits, but it puts us in a better position to adjust our infrastructure,” he said.