Asean ready to rush aid to quake victims in Visayas 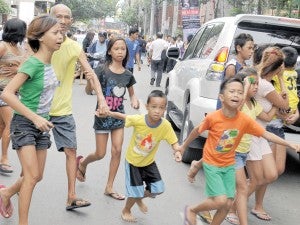 QUAKE PANIC Residents in Cebu City run scared as reports of a tsunami swept the city after a 6.9-magnitude earthquake shook the Central Visayas metropolis on Monday. The earthquake’s epicenter was placed near Tayasan town in Negros Oriental. The Philippines lies in the Pacific “Ring of Fire” and is prone to earthquakes and volcanic eruptions. AFP

Neighboring countries in the Association of Southeast Asian Nations (Asean) are “ready to rush assistance” to the Philippines in the aftermath of the earthquake in the Visayas and with its newly formed disaster response agency.

Asean Secretary General Surin Pitsuwan said in a statement he had directed the Jakarta-based Asean Secretariat and the Asean Humanitarian Assistance (AHA) Center to monitor developments “and be ready to provide assistance if required.”

“I am sorry to learn of the casualties but am relieved that the tsunami alert has now been canceled,” Surin said, noting that the Philippines was still busy with recovery efforts following last December’s Tropical Storm “Sendong.”

Surin said: “Asean stands ready to rush assistance to the Philippines, and I’m sure our dialogue partners are ready to assist if necessary.”

He was referring to the Asean partners—Japan, China, South Korea, India, Australia, New Zealand, European Union, United States, Canada and Russia—most of which supported the establishment of the AHA Center.

Surin said the AHA Center was closely monitoring the situation, including the extent of damage and the assistance required, in close cooperation with Philippine authorities.

The Asean launched the center in November 2011 as several member states reeled from the devastation caused by natural calamities, including Typhoons “Pedring” and “Quiel.”

The center is meant to serve as focal point for mobilizing resources to disaster-affected areas and act as a coordinating agency for collective response to disasters in the Asean region.

Last year, Surin said the spate of natural disasters had reaffirmed the need for Asean to be capable of coordinated reaction to emergencies.

Pedring and Quiel killed hundreds of people in five Asean members, including the Philippines, Cambodia, Laos, Thailand and Vietnam.