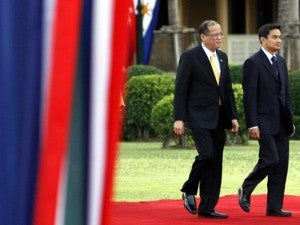 Some Thai journalists who covered the President’s two-day state visit in Thailand admitted that his being unmarried aroused their curiosity.

At 51 and a son of democracy icons, Aquino is considered as the most eligible bachelor in the Philippines.

“He’s already 51 years old and still single? How come he has no girlfriend? Your President is very handsome,” Jane Lim of the Chinese Xinhua news agency told the Philippine media delegation.

“I think he’s the only president in the world who’s still single. A president cannot be single,” she said.

Lim added in jest: “I would have asked him out, but I didn’t have the [courage].”

Another Thai lady reporter, who asked not to be named because of company policy, said Aquino’s work ethics may have prevented him from pursuing a serious relationship.

“I bet he’s hardworking that’s why he has no time for love,” she said.

The President just laughed off the Thai journalists’ comments, saying he already said his piece on the matter several times before.

“You know it’s this simple: If you want me to get married, then maybe you should help me. How? You just let me (and my date) know each other more,” he said, without mentioning any name.

“For those who don’t want me to get married—at last I know you don’t—then continue what you’re doing.”

He said the media’s keen interest on his love life had been discouraging women from going out with him.

The President was recently photographed attending a concert in Makati City with a young woman later identified as Bunny Calica.

“My dates are not applying for a position or appointed for anything. But it’s as if they have to go through something stricter that the CA (Commission of Appointments),” he said, drawing laughter from Filipino journalists.