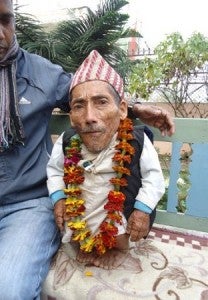 Chandra Bahadur Dangi, a 72-year-old Nepali who claims to be the world's shortest man at 56 centimeters (22 inches) tall. AFP

KATHMANDU—Guinness World Records experts said Thursday they are to travel to a remote valley in southwestern Nepal to measure a 72-year-old claiming to be the world’s shortest man.

“We intend to travel to Mr Dangi’s village to officially measure him and are currently making provisions for medical professionals to assist us in the verification,” Guinness World Records editor-in-chief Craig Glenday told Agence France-Presse by email.

The record is held by Filipino Junrey Balawing, who measures 59.93 centimeters and took the title last year from another Nepali, Khagendra Thapa Magar, who was measured in 2010 at 67 centimeters.

Magar’s stint as the world’s shortest man saw him travel to more than a dozen countries and make television appearances in Europe and the United States.

State-run Nepal Television broadcast images on Wednesday of Dangi jumping off a park bench and taking a short walk in front of journalists.

Members of his family were quoted by local media as saying Dangi was in excellent health and had never taken medicine or been to hospital.

“We cannot confirm Mr Dangi’s height until formal measurements have been taken and verified by Guinness World Records officials but we hope to undertake the verification in the next few weeks,” said Glenday, who is to make the journey to impoverished Dang district, which borders India.

Dangi has already become something of local celebrity in southern Nepal, appearing at community events and opening religious festivals.

He was also the official face of Nepal’s tourism campaign, which featured him as the smallest man in a country that is home to the world’s highest peak, Mount Everest.

ADVERTISEMENT
Read Next
Los Angeles has most number of registered OAVs
EDITORS' PICK
‘Justice will be done,’ Duterte assures as he vowed probe on Jolo incident to bare ‘truth’
EuroMillions Superdraw: A lottery draw unlike any other is coming to the Philippines
Current dominant strain of COVID-19 more infectious than original—study
DOLE: Return of OFWs’ remains from Saudi to be ‘delayed,’ deadline moved to ‘early next week’
Smart releases Hyun Bin’s second TVC
Water remains our saving grace right now
MOST READ
BREAKING: Duterte signs anti-terror bill into law
Duterte tells military: No other president looked at you the way I did
Locsin warns of ‘severest response’ if China’s army drills in SCS ‘spill over’ to PH domain
Vico: Cleanup of bidding process saved Pasig gov’t P415M
Don't miss out on the latest news and information.