Naia holds own survey of passengers 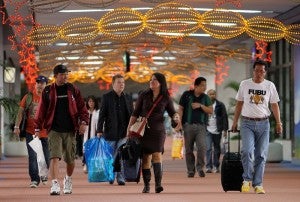 Instead of relying on survey results of foreign travel websites, like the Guide to Sleeping in Airports and Frommer’s, the Manila International Airport Authority (MIAA) has been conducting its own in-house surveys of passengers using the Ninoy Aquino International Airport’s (Naia) four terminals.

This was disclosed by the managers of Naia Terminals 1 and 4 who both stressed the importance of conducting such surveys on the facilities’ level of cleanliness, services, on-time departures, and ease of navigation, among others.

Dante Basanta, the manager of the decades-old Naia Terminal 1, said they were “actually doing a periodic survey on passengers’ satisfaction.”

While he did not provide details about the results of their own survey, Basanta noted that “there were also positive reactions” from travelers using the terminal.

The Guide to Sleeping in Airports tagged Naia 1 as the “world’s worst airport” in 2011, which had supposedly worsened from the interactive website’s assessment in 2010 that it was the fifth worst airport in the world and the worst in Asia.

Rico Gonzalez, the Terminal 4 head, said the MIAA in-house survey was “in fact being discussed by the group who worked on the ISO certification of the terminals.”

ISO, short for International Organization for Standardization, is a network of the national standard institutes of 163 countries worldwide. Its secretariat is based in Geneva, Switzerland.

Two weeks ago, Basanta dismissed the issues raised on the Frommer’s website as “old and rehashed.”

He said the terminal management had “already done several improvements in the past. But we will definitely see a new Naia Terminal 1 by the end of the year.”

Frommer’s had cited an Agence France-Presse report saying the terminal “has been a frequent target of criticism with travelers and the business community, complaining it is congested, run-down and filthy, with toilets that do not work.”

The Department of Transportation and Communications has rolled out a program for the upgrade and structural rehabilitation of the terminal to the tune of P1.16 billion.

MIAA general manager Jose Angel Honrado has said the retrofitting program would start with the pullout of the arrival lobby escalator that leads to the departure level in order to create more space for passenger movement.

Honrado said there were also plans to move the banks and duty-free shops from the arrival lobby and customs area to enlarge space for arriving passengers.

The MIAA has allocated P500 million for architectural, engineering and interior design and works to improve the terminal’s internal facilities.

Also, P340 million has been set aside for retrofitting to improve the structural integrity of the terminal building and make it compliant with the National Structural Code of 2010.

To address runway congestion, P300 million will be used for the construction of a rapid exit taxiway.

Another P20 million will be used for the complete rehabilitation of the terminal’s 72 toilets.

The long-term plan also provides for moving some of the international airline firms currently using Terminal 1 to the newer Terminal 3, he said.

Flag-carrier Philippine Airlines is based at Terminal 2, while Cebu Pacific and Air Philippines flights emanate from Terminal 3.

Terminal 4, or the old Manila Domestic Airport, is the base of operations of smaller carriers Zest Air and Sea Air.

During an earlier interview, Honrado appealed to Terminal 1 critics to stop calling it the worst airport in the world.

“Talking about the supposedly worst airport in the world, they say some people voted. But who voted? And how many voted? What’s their methodology?” he said.

He said the MIAA “has been rehabilitating the airport since last year.”

He said that “even before the alleged survey results came out, we were already rehabilitating the facility.”