DFA to offer ‘voluntary’ repatriation to Filipino workers from Iraq 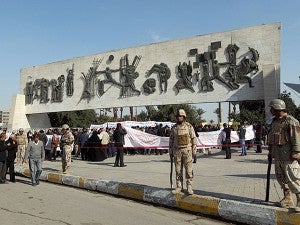 MANILA, Philippines – The Department of Foreign Affairs is set to raise to No. 3 (voluntary repatriation) the alert level for the over 470 remaining overseas Filipino workers (OFWs) in Iraq, citing the “escalating bombing incidents and the apparent diminution of security” in the war-torn country.

Foreign Affairs Secretary Albert del Rosario, who just concluded his first official visit to Baghdad, reported on Tuesday that he had informed his Iraqi counterpart, Hoshyar Zebari, of the government’s intention to raise the alert level.

Del Rosario said Zebari assured him that “the Iraqi government will be providing all the assistance in order to protect [Filipino] nationals and bring them out of harm’s way.”

“We discussed the security situation in Iraq in light of the recent bombings in Baghdad after the withdrawal of the US military,” the DFA chief also said.

The DFA said that at least 279 OFWs were based in the Iraqi capital while 192 others are in the Kurdistan Autonomous Region.

Raul Hernandez, the DFA spokesman, noted that “while the visit was conducted mainly to assess security and get the assurance of Iraq for the safety and well-being of Filipino expatriates in that country, the two officials also discussed at length ways of expanding bilateral relations in such fields as trade, investment, labor, health, culture, and people-to-people exchanges.”

“[Del Rosario] also invited Foreign Minister Zebari, who is scheduled to visit Manila during the second quarter of the year for the 6th Philippines-Iraq Joint Consultative Meeting, to map out the targets of the two countries’ cooperation,” said Hernandez.

He called Del Rosario’s trip to Iraq an “important milestone” in Manila-Baghdad relations, noting it was the “first conducted by a DFA secretary in more than 20 years.”

In late 2011, a DFA-led delegation traveled to Iraq to look into the possibility of reopening the Philippine embassy in Baghdad and the lifting of the ban on the deployment of OFWs to that country.

The delegation, led by DFA Undersecretary Rafael Seguis, met with ranking officials of the Iraqi government, as well as OFWs in Baghdad and Erbil.

It was the first visit to Iraq by a ranking Philippine government official since the foreign office transferred the embassy in the Iraqi capital to Amman, Jordan, in 2005.

The relocation of the country’s diplomatic mission was prompted by security concerns following the kidnapping of Iraq-based OFWs Angelito dela Cruz and Robert Tarongoy in 2004 and 2005, respectively.

The government imposed the deployment ban in 2004. Lately, it allowed those working inside American military camps to finish their job contracts.

In August, Malacañang said that the ban on the deployment of OFWs to both Iraq and Afghanistan would remain.

The Palace reviewed the ban to the two countries after the US military ordered all its contractors not to hire third-country nationals whose domestic laws prohibit their citizens from traveling and working there.