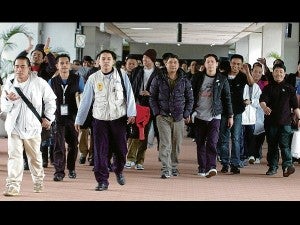 PROUD AND COMMITTED, Filipino crew members of the ill-fated Costa Concordia arrive home. Some passengers said they owned their lives to Filipino cooks and stewards who roped themselves together to help them get down to the lifeboats. RODEL ROTONI

SAN FRANCISCO—Media coverage of the Costa Concordia tragedy has been focused mainly on the captain accused of having a romantic dinner as his ship was sinking and then abandoning his crew and passengers to save himself.

Survivors, however, have also turned the spotlight to the doomed ship’s Filipino crew.

When calamity struck in the middle of the night, the Filipinos were disciplined and calm. They attended to the welfare of the passengers, especially the children.

A French passenger quoted in media reports recalled how the people who helped them “were cooks and stewardesses, all Filipinos. They roped themselves together to help us get down to the lifeboats.”

Who wouldn’t be moved by these accounts of bravery and selflessness?

It reminded me of another maritime tragedy in which the portrait of the Filipino as courageous, humane seafarers also came into sharp focus.

The so-called Maersk Dubai incident was recalled in a stirring January 1997 article in the New Yorker by Scott Malcomson.

In 1996, a group of Filipino merchant seamen on the Maersk Dubai, a Taiwanese cargo ship, found themselves in a bind.

When one of them, Rodolfo Miguel, discovered two Romanian stowaways on the ship which was headed for the Port of Halifax in Canada, he did his duty: he reported the incident to his Taiwanese superiors.

To the shock of the Filipino seamen, the officers put the Romanians in an improvised raft and threw them out of the ship to certain death. Miguel and his fellow Filipinos were stunned.

Then came an unexpected twist. While Miguel was walking on the deck of the ship one day, another Romanian, Nicolae Pasca, suddenly approached him. Looking weak from days of hiding without food, Pasca wanted to surrender to the Filipino. In the Romanian’s hand was a Bible. 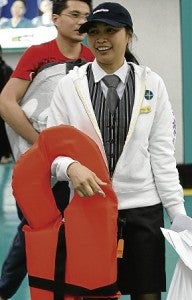 Knowing that Pasca was in danger, Miguel quickly guided the Romanian to a new hiding place.

Though they could not understand one another, Miguel struggled to tell the Romanian that he should consider the Filipinos his allies, the New Yorker piece related. “Filipino, no problema.”

He then pointed to a verse in the Bible the Romanian had with him. The verse was Psalm 91 part of which goes: “He that dwelleth in the secret place of the most High shall abide under the shadow of the Almighty.”

“Read this every time when you sleep,” Miguel told the Romanian, according to the New Yorker account.

They were not able to protect the two other Romanian stowaways, and many of them had struggled with guilt and helplessness because of what happened.

But now they were going to do everything they could to protect another stowaway.

It could mean losing their jobs, and maybe even their lives—but it was the right thing to do. They were not going to let another human being die.

They came up with a code for the Romanian, according to the New Yorker account. They called him “ibon”( which means bird in Filipino). And they would ask whoever was assigned to bring food to their secret friend, “O, pinakain mo na ba ’yong ibon (Oh, have you fed the bird)?”

When the ship finally reached Halifax, the Filipinos jumped ship and reported the incident to authorities. The Romanian survived. The ship’s Taiwanese officers were arrested. (They were later extradited to Taiwan, according to Wikipedia.)

During a hearing in Canada, continued the New Yorker, Miguel struggled in broken English to declare in the courtroom, “I’m not here to lie. I’m here to stand and to stop the things that happened.”

THE COSTA Concordia lying on its side off the island of Giglio, Italy. AP

But he and the other Filipinos struggled with the consequences of saving the Romanian’s life. According to the New Yorker, their families reported receiving threatening anonymous phone calls warning that the stranded Filipino seamen should not testify in the case.

It’s a tragic, yet inspiring, story of courage and human decency—one that should be remembered as we honor yet another group of professional, honorable and humane seafarers from the Philippines.