Now it’s official: Puerto Princesa river is one of New7Wonders 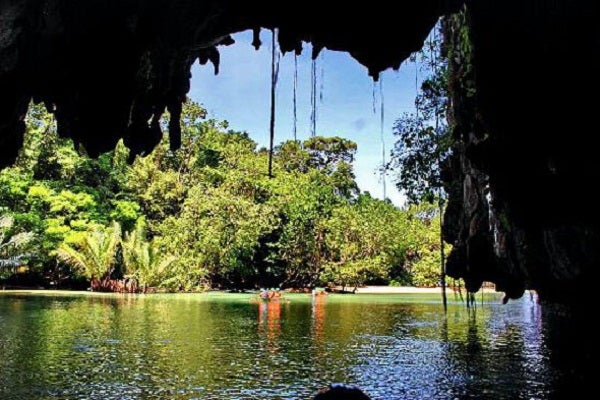 MANILA, Philippines—The Puerto Princesa Underground River (PPUR) is now officially one of the New7Wonders of Nature, the founder of global campaign announced on Saturday.

Bernard Weber, founder-president of New7Wonders, congratulated the Filipinos as the 8.2-kilometer Palawan river joined the Amazon rainforest, Vietnam’s Halong Bay and Argentina’s Iguazu Falls as among the world’s new seven wonders of nature.

“When your very own President Aquino came out in support of the PPUR campaign, I knew that this country was taking the New7Wonders of Nature seriously,” said Weber. “Fans of PPUR all over the world responded to his call for action by voting in record numbers and today’s confirmation is the well-earned reward for this extraordinary display of enthusiasm.”

Aquino even sailed the river last year on board a paddleboat as he urged Filipinos to help push the Philippines’ bid for a spot in the New7Wonders of Nature.

“World-wide exposure of our natural beauty on this level is critical both for tourism and for our image nationally and internationally,” he said.

This navigable underground river winds through a cave before flowing directly into the West Philippine Sea. At the exit, a flawless lagoon is framed by ancient trees growing right to the water’s edge.

Provisional results of the final seven were released last November 12 after a long consultation process lasting from December 2007 to July 2009, when world citizens were asked to put forward sites which they deemed were natural wonders.

More than a million votes were cast to trim the list of more than 440 contenders in over 220 countries down to a shortlist of 77.

The group was then further cut to 28 finalists by a panel of experts.

Anyone in the world was then able to vote for the final seven via telephone, text messages or Internet social networks.

Founded in 2001 by filmmaker Bernard Weber in Zurich, the foundation New7Wonders is based on the same principle on which the seven ancient wonders of the world were established. That list of seven wonders was attributed to Philon of Byzantium in ancient Greece.

New7Wonders said its aim is to create a global memory by garnering participation worldwide. With Agence France-Presse

Duterte to Gordon: Inciting to sedition? File a case and I’ll sue you too

Corruption scandals under Duterte: From whiff to helplessness