Filipino educator of star quality in US 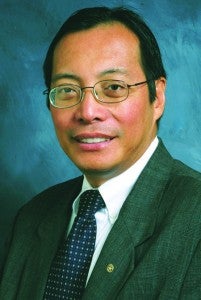 SAN RAFAEL, Bay Area, California—If you meet and get to know a kababayan who is a top-notch guru in this country, you can’t feel but be proud being a Filipino.  He is, and was, dean, professor, scholar, conference speaker, writer, editor, researcher, strategic planner, administrator, provost, controller, reviewer of scholarly thesis and journals, and loads more.

Luis Ma. R. Calingo, Ph.D., is executive vice president and chief academic officer of the Dominican University in San Rafael (North Bay), the first Filipino to hold these positions and is one of two US university provosts who are of Filipino descent.  He joined the university in 2007.

Yet even before coming to the Dominican University, Dr. Calingo’s curriculum vitae makes for great sound bites, heavily laden with people skill which is his strong asset.
Dr. Calingo — who has a doctorate in philosophy and master’s degree in business administration from the Joseph M. Katz Graduate School of Business of the University of Pittsburgh, Pennsylvania — was dean and professor of international business in various universities here and abroad, notably the Jesuit-run John Carroll University in Northeast Ohio; California State University at  Fresno and Long Beach campuses; founding faculty member at the Nanyang Technical University in Singapore; professor at the Monterey Institute of  International Studies in Monterey, California; and guest appearances as speaker for various community,  professional, trade, educational and civic organizations in Korea, Malaysia, Singapore, Vietnam, China, Fiji, Philippines, Mexico, Canada, Indonesia, New Zealand, and various cities in the US.

Upon the organization of the California State University Association of Business Deans, he was elected secretary, then vice chair and eventually chair.  During his tenure as chair, he coordinated the CSU business schools’ collective efforts to design and implement a statewide exit test for undergraduate business students that, at that time, saved thousands of dollars for each participating campus and to create a harmonized framework for self-supporting business degree programs.  The exit test–the CSU Business Assessment Test–was cited as a “best practice” by the Association for Institutional Research.

As EVP and chief academic officer of Dominican University, Dr. Calingo is honored to serve a school touted as the regional hub of higher learning of Catholic heritage, founded by the Dominican Order of Preachers in 1890, which is committed to academic excellence and community engagement.  It has a student headcount of 2200, of which 30 percent are graduate students.   The US News & World Report has rated the university among the top regional universities in the West, especially in Northern California.  Previous to his present position, he was dean for two years of its school of business and leadership.

Dr. Calingo graduated from the University of the Philippines with a Bachelor of Science degree in Industrial Engineering and a master’s degree in Urban and Regional Planning.  After two years with the Ministry of Human Settlements as corporate staff director for program development and evaluation, he came to the U.S. in 1980 to pursue his graduate studies as a scholar at the Joseph Katz Graduate School of Business.

Dr. Calingo has held senior administrative positions in higher education, spanning 20 years in the United States and Asia.  His signature competencies are in strategic planning, policy analysis, external relations and fund-raising, total quality management, development of interdisciplinary academic programs, and creation of institutional linkages, as well as international business with a focus on Southeast Asia.  His most significant national service is his membership since 1997 in the Board of Examiners of the Malcolm Baldrige National Quality Award, the President’s highest award for quality and business excellence.

He has written more than 80 intellectual contributions on business strategy, joint ventures, quality management, cross-cultural management, resource allocation, entrepreneurship, business ethics, and served as reviewer of various scholarly journals and professional associations.  One of his books, Strategic Management in the Asian Context (1997), became the first internationally published textbook on Asian business strategy that is being used in business schools in Asia, Europe, and the United States.

Wherever he was as university dean, he always made a mark using his vaunted skill in strategies and innovative approaches in creating memorable student experiences, developing and revamping the curriculum and faculty standards, at the same time, through community partnerships and business linkages, responsible for generating huge private grants and endowments in the millions of dollars.

Dr. Calingo has a vast range of affiliations–professional, business, community, civic, educational–both past and present.  A resident of Marin County, he serves on the governing boards of Catholic Charities CYO of the Archdiocese of San Francisco and the Ukleja Center for Ethical Leadership in Long Beach. He has also served on the North Bay Leadership Council of Marin and Sonoma counties, as well as the Marin County Workforce Investment Board.

Since 1996, he has been a consultant to the Philippine Government in the establishment of the Philippine Quality Award.  The Asian Productivity Organization has sent him on similar technical assistance missions to the governments of Indonesia, Mongolia, Pakistan, Sri Lanka, Thailand, and Vietnam.  In recognition for his service to the United States, the Philippines, and other Asian countries, he received the Distinguished Alumnus in Industrial Engineering Award from the University of the Philippines during its Centennial Year 2008.

On the lighter side, Dr. Calingo doesn’t only exercise his vocal cords when he lectures but also when he sings as he strums his guitar.  His parish in the Philippines, which he organized, went on to pocket awards during choral competitions as did the U.P. choral ensemble where he was a mainstay.

In spite of his prodigious intellectual pedigree, there is nary a hint of diva nor trace of air in him.  He has remained humble and down-to-earth.  He is a devout family man for 30 years, happily married to the former Gemeline Braga with whom he has three beautiful daughters in Ashley, 28; Alexandra; 24; and Arienne, 19.