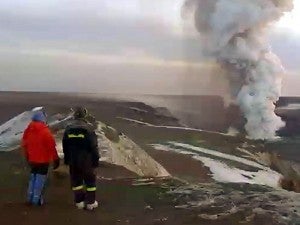 People watch a plume rising from the Grimsvotn volcano in Iceland Wednesday. Volcano experts in Iceland said that the eruption which began Saturday appeared to be tapering off. AP

BRUSSELS—No significant disruptions of air traffic are expected in Europe in coming days as a result of volcanic activity, Eurocontrol said Thursday.

But the international airline pilots association warned its members to remain vigilant.

“As a result, there are no areas of high concentrations predicted or observed over Europe today,” said Brian Flynn, head of network operations for the Brussels-based agency.

“There are no flight restrictions anywhere,” he added.

Earlier in the week ash clouds forced airport closures and hundreds of flight cancellations in Britain, Germany and elsewhere in northwestern Europe.

Some ash was projected to still linger over small parts of northern Scandinavia and northern Russia early on Thursday before dispersing later in the day. Other clouds were drifting between Iceland and Greenland.

But Flynn said these would not disrupt air traffic.

“Any significant ash concentrations are far out over the sea, at very low altitudes and well away from the air routes or airports,” he said. “The expectation for the next couple of days is that there will be no disturbances to air traffic whatsoever.”

While experts say particles in the ash could stall jet engines and sandblast planes’ windows, some airline executives have argued the flight bans were a massive overreaction by badly prepared safety regulators.

The International Federation of Airline Pilots Associations said that despite the all-clear it was still recommending to its members to “to err on the side of safety.”

“IFALPA recommends that pilots plan (flights) to avoid areas of contamination at any level,” a statement said.