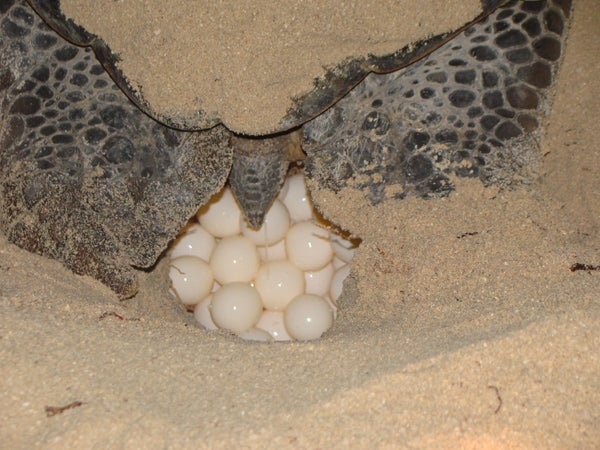 A female turtle lays around 100 eggs per nesting, and hatchlings emerge after 7-12 weeks. Photo by Orlando Maliwanag/Conservation International

A total of 14,220  green turtle nests  were recorded on Baguan Island in 2011, up from the 12,311 nests recorded in 1995, CI Philippines, citing figures obtained from the Department of Environment and Natural Resources (DENR), said.

An average of 101 eggs are laid per nest and with 14,220  nests in 2011 an estimated 1.44 million eggs of green turtle  (Chelonia mydas) were laid last year, said Romeo Trono, CI Philippines country executive director.

CI Philippines said the number of laid eggs was an all-time high since recording of nesting started in 1984.

Green turtles are classified as Endangered under the International Union for Conservation of Nature (IUCN) Red List of Threatened Species.

“1.44 million green turtle eggs in one year is an astounding number for a nesting beach that’s only a little over one kilometer in length. This definitely presents great hope for boosting green turtle populations,” said Trono.

“With an average of 90 percent hatching success and 1 percent survival rate up to sexual maturity, Baguan in 2011 alone could contribute up to 13,000 to the adult turtle population,” Trono said.

Figures from the DENR show that since the previous high of 12,311 turtle nests recorded in 1995, Baguan’s nesting had been declining and dropped to as low as just over 4,000 nests in 2003.

Poaching by foreign fishermen, egg harvesting by local communities for food and trade, destruction and disturbance of habitats through illegal fishing methods and weak law enforcement were identified as the causes of the decline in the egg production and sea turtle population in the sanctuary.

“The increasing nest numbers show that when turtles are protected on their nesting beaches and in the water for long enough, they will recover,” said Dr. Bryan Wallace, director of Science for the Marine Flagship Species Program at CI.

“The Turtle Islands are a globally important area for green turtles, especially for the West Pacific population, because of the relatively high abundance present and because of increasing protections for turtles in the area,” said Wallace.

Since 2007, CI Philippines has been working with the DENR and the local government as well the Malaysian park management authority Sabah Parks to advise and implement marine conservation strategies in the region, including:  setting up of the protected area management board, formulation of a ten-year management plan, and delineating 1,200 hectares around Baguan as strict protection zone or no take areas.

Law enforcement in Baguan was also strengthened by providing trainings to park wardens, law enforcers and community volunteers and stepping up patrolling efforts. The Philippine Turtle Islands’ enforcement team also includes officers and personnel from the Philippine Coast Guard and the Philippine Marines deployed to the area.

“These partnerships with other agencies like the Coast Guard and Marines provide a big boost to law enforcement efforts in the Turtle Islands,” said Dr. Mundita Lim, director of DENR’s Protected Areas and Wildlife Bureau.

“We also enjoy a good working relationship with our Sabah counterparts in charge of managing their side of the Turtle Islands. Turtles nest throughout the entire area, regardless of political boundaries. That is also the approach we are using in managing these islands through productive partnerships,” said Lim.

“The work that we are doing in Turtle Islands is an important contribution to the overall health of the Coral Triangle,” said DENR Secretary Ramon Paje, emphasizing the Turtle Islands as a conservation priority not only for the Philippines and Malaysia but for all the other countries in the region. “If the Turtles Islands are not protected, it can have serious implications to the whole region’s turtle population and marine ecosystem.”

Dr. Nicolas Pilcher, director of Sabah-based Marine Research Foundation and co-chair of the IUCN Marine Turtle Specialist Group, noted that bold protection measures such as the establishment of Baguan no-take zone and the complete protection status of the Turtle Islands Park in Sabah had been instrumental in ensuring a safe haven for turtles while other beaches in the region were being lost to coastal development.

“Indeed, the combined turtle stocks from the Philippine and Malaysian Turtle Islands, which share genetic similarities, is the single largest and most stable population of green turtles in all of Southeast Asia, and is of paramount importance in ensuring the long-term survival of the population,” Pilcher added.

An average of 30 to 35 green turtles nest on Baguan’s shores every night, with totals increasing to as many as 140 during the peak nesting season of July to September. With each nesting, a sea turtle lays around 100 eggs and nests as many as five times within one nesting season. Only green turtles nest in Baguan though its surrounding reefs and water also serve as development and feeding habitats for hawksbill turtles (Eretmochelys imbricata, classified as Critically Endangered by the IUCN).

Conservation initiatives in Baguan are partially supported by the Global Marine Division of Conservation International and the Coral Triangle Support Partnership funded by  the United States Agency for International Development.

“The hatchlings that emerge from the Turtle Islands still face great risks throughout their lives as they journey through the ocean, but at least here in the Turtle Islands, we are determined to provide them with a good start,” Trono said.