US, Philippines eye more war drills, but no bases 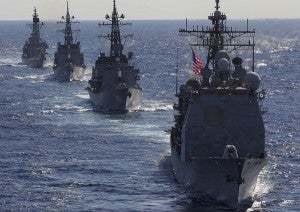 MANILA, Philippines—US and Filipino defense officials will discuss how to intensify joint war drills in the Philippines without re-establishing vast US military bases, as America tries to reassert its presence in Asia, a Manila official said Thursday.

While America plans to station troops in Australia and dock Navy ships in Singapore, it’s only looking at increasing the frequency of joint military exercises with Filipino troops in the Philippines, Defense Secretary Voltaire Gazmin said.

President Barack Obama’s administration plans to enhance American presence in Asia because of the region’s economic importance and China’s rise as a military power. It aims to retain American military pre-eminence worldwide despite stiff budget cuts.

A Philippine delegation led by a defense undersecretary will hold strategic talks with US counterparts in Washington from Thursday to Friday on a wide range of economic and defense concerns, including intensifying joint military exercises of the longtime military allies, Gazmin said.

Any additional joint military activity would conform with the 1999 Visiting Forces Agreement, a bilateral accord that allows U.S. ship visits and American troops to hold joint military exercises in the Philippines. There would be no discussion on bringing back permanent US military bases in the country, he said.

U.S. ships and aircraft can be allowed to visit and resupply within the limits stated in the accord, he said.

“That agreement will prevail,” Gazmin said.

The Philippine Senate voted in 1991 to close major US military bases in the country. Under the 1999 agreement, hundreds of American troops were allowed to return in 2002 for military exercises and to train and arm Filipino soldiers fighting al-Qaida-linked militants in the southern Philippines. About 500 to 600 American counterterrorism troops have remained in the south.

Filipino defense officials would also discuss with their US counterparts in Washington requests for an additional US Coast Guard cutter, a squadron of F-16 fighter jets and other weapons the Philippines needs to bolster its territorial defense, Philippine defense spokesman Peter Paul Galvez said.

The Philippines has turned to Washington for warships, fighter jets and radar to bolster its anemic military after accusing Chinese ships last year of repeatedly intruding into areas it claims in the South China Sea’s disputed Spratly Islands and disrupting oil exploration in its territorial waters.

Washington has announced that the peaceful resolution of the territorial conflicts and freedom of navigation in the South China Sea, home to some of the world’s busiest shipping lanes, is in the US national interest.

Several top American officials have made high-profile visits to reassure the Philippines of military support.

The battle for ownership of the Spratlys has settled into an uneasy stand-off since the last fighting, involving China and Vietnam, that killed more than 70 Vietnamese sailors in 1988. The other claimants are Brunei, Malaysia and Taiwan.