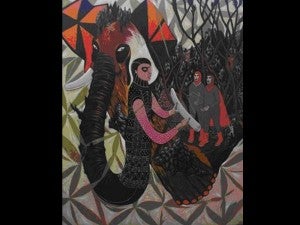 MANILA, Philippines—Filipino painter Rodel Tapaya is holding a solo exhibit in an upscale commercial center in Beijing entitled “This Beast I Have Become” at the Y++ Gallery Triwizart from June 5 to August 7, the Philippine Embassy in Beijing said.

“The works for this series are inspired by folk tales that have animals in the story,” said the 31-year-old Tapaya.

“Animals that do not only possess mystic magical qualities but also human attributes such as cleverness, helpfulness, loyalty,” he said.

Tapaya, who studied painting and drawing at the University of the Philippines, Parsons School of Design in New York City and University of Art and Design in Helsinki, had several solo exhibits since 2004.

He had mounted exhibits at Singapore’s The Drawing Room in 2006 and in Utterly Art in 2008.