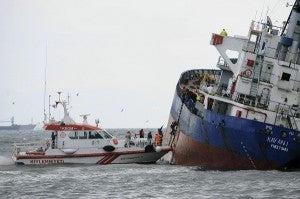 ANKARA, Turkey —A cargo ship brushed against two anchored vessels during severe weather off the coast of Istanbul on Friday and tilted to one side, taking on water for hours before authorities were forced to pull it ashore using a tug boat.

A senior maritime official said the disabled ship was not in danger of sinking, but most of its crew members were evacuated before it was towed.

The cargo ship’s struggle came during a time of heightened attention on ship safety following last week’s grounding of the Costa Concordia cruise ship off Italy’s coast, an accident that killed 11 people and left 21 missing. Also Friday, a freighter ran aground off a Dutch beach.

In the Istanbul area, the Sierra Leone-flagged Kayan-1, an 86-meter (282-feet) freighter carrying empty containers, tilted on its right side after its collision. Salih Orakci, head of the General Directorate of Coastal Safety, said the ship “cannot sink” but noted the weather was aggravating the situation.

Hours later, authorities decided to go with the only apparent option and pulled the ship aground.

The captain and two other crew had remained aboard to steer the vessel, which earlier had tried to pump out the water, authorities said. Ten other crew members were evacuated. Five maritime officials boarded the Kayan-1 to assess the situation, then left the vessel.

The ship was trying to moor due to the rough weather when it got dragged and brushed against two other cargo ships: the Netherlands-flagged Slochterdiep and Tanzania-flagged Adria Blu. The Kayan-1 came to a halt near the shore at a depth of 9-meter (30-feet), Coastal Safety said on its website.

The ship had 20 tons of diesel fuel but there was no leak, environmental authorities said

Authorities canceled several scheduled ferry trips in the Sea of Marmara and in the Bosporus, the narrow waterway that bisects Istanbul, due to strong winds and high seas.

Separately Friday, a Philippine-registered freighter ran aground off a Dutch beach after its anchor slipped in an overnight storm. Salvagers spent the day attaching lines to the ship and plan to try pulling it back out to sea at high tide in the early hours of Saturday.

The 500-foot (155-meter) Aztec Maiden was carrying no cargo when it drifted onto sand off the North Sea coastal town of Wijk aan Zee, 12 miles (20 kilometers) west of Amsterdam, the Dutch Coast Guard said.

The 21 crew members stayed on the ship. Tug boats will attempt to pull the vessel free at high tide around 1 p.m. (1200 GMT).

Spokesman Peter Verburg told national broadcaster NOS that the Coast Guard was closely monitoring the ship for any fuel leaks.