In The Know: Yingluck Shinawatra 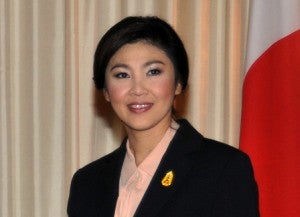 Yingluck, the youngest to assume the highest political office in Thailand, is the youngest sister of former Thai Prime Minister Thakshin Shinawatra, who was ousted in a 2006 military coup. He is on self-exile in Dubai, evading a jail term for abuse of power.

Yingluck has been referred to as the clone of her brother, who still wields influence on the party.

Before entering politics, Yingluck was senior executive in a telecommunications firm and president of SC Asset, a family firm involved in property.

In October, Yingluck came under fire for her handling of the worst flooding that devastated the country in a century, which claimed the lives of over 300 and forced the closure of about 1,000 factories.

Born in Chiang Mai on June 21, 1967, Yingluck attended Chiang Mai University and graduated with a master’s degree in public administration from Kentucky State University in the United States.

She is married to businessman Anusorn Amornchat and has one son. Lawrence de Guzman, Inquirer Research