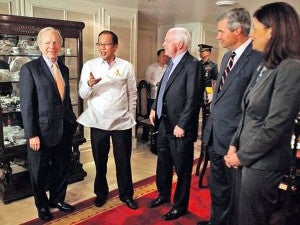 Presidential spokesperson Edwin Lacierda disclosed the topics that President Aquino was expected to discuss with McCain at their meeting in Malacañang.

These included the Save Our Industries Act, a bill pending in the US Congress that will help save jobs in the US textile and Philippine apparel industries, and “clarifications on the PH-US Mutual Defense Treaty.”

“Since he is a member of the Senate Armed Services Committee, they will be discussing issues surrounding the West Philippine Sea,” Lacierda said, in reference to McCain.

The Philippines recently conveyed to the Chinese embassy in Manila its “serious concerns” over the presence of two Chinese vessels and a navy ship at Escoda shoal, off Palawan waters, last month.

A Philippine military commander said they apparently came from a Chinese-occupied reef in the disputed Spratlys islands before cruising into Philippine waters.

Escoda is well within the Philippines’ internationally recognized 200-mile exclusive economic zone but China claims all of the South China Sea, including the potentially oil-rich Spratlys islands. Christine O. Avendaño