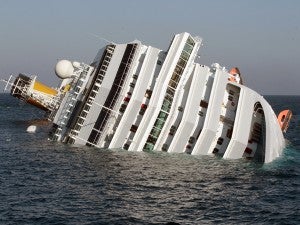 A luxury cruise ship Costa Concordia leans on its side after running aground the tiny Tuscan island of Giglio, Italy, Saturday (January 14, 2012), sending water pouring in through a 160-foot (50-meter) gash in the hull and forcing the evacuation of some 4,200 people from the listing vessel. GREGORIO BORGIA/ AP PHOTO

All 296 Filipino crew members of the Costa Concordia are “safe and accounted for, and due for repatriation to Manila,” the Department of Foreign Affairs (DFA) said Monday.

Citing a report from the Philippine Embassy in Rome, Raul Hernandez, the DFA spokesperson, also clarified that contrary to some news items, “only three Filipino crew members were among the reported injured” when the cruise ship ran aground Friday off the island of Giglio in Italy.

“I don’t know where they got that information… only three were injured,” Hernandez told the Philippine Daily Inquirer after a wire report said 21 Filipinos were hurt.

On Saturday, Philippine Ambassador to Italy Virgilio Reyes said one of the injured Filipinos had a broken arm while another suffered from hypothermia. He did not describe the injury to the third Filipino nor did he identify the three.

On Sunday, coast guard divers searching the submerged part of the Costa Concordia found the bodies of two elderly men still in their life jackets, authorities said, raising to five the death toll after the luxury liner ran aground and tipped over off the Tuscan coast.

Divers scouring the bowels of the ship in the murky, cold sea discovered the bodies at the emergency gathering point near a restaurant where passengers were dining when the ship carrying more than 4,200 people hit a reef or rock near the island of Giglio, Coast Guard Cmdr. Cosimo Nicastro said.

The discovery reduced to 15 the number of people still unaccounted for after an Italian who worked in cabin service was pulled from the wreckage Sunday and a South Korean couple on their honeymoon were rescued late Saturday.

“We are still searching” for any bodies, “but (also) in the hope that there might have been an air pocket” to allow the survival of others, Nicastro told TV news dockside.

Authorities are holding the Italian captain for investigation of suspected manslaughter and abandoning his ship, among other possible charges.

According to the Italian navigation code, a captain who abandons a ship in danger can face up to 12 years in prison. A coast guard official said Sunday officers exhorted Francesco Schettino to return to his ship as panicked passengers desperately fled the cruise liner.

Costa Crociere SpA, the Genoa, Italy-based cruise company, issued a statement late Sunday saying it “seems the captain made errors of judgment that had very grave consequences: The route followed by the ship turned out to be too close to the coast, and it seems that his decision in handling the emergency didn’t follow Costa Crociere’s procedures, which are in line and, in some cases, go beyond international standards.”

Company officials were not immediately available for comment, but a company employee confirmed the statement had been issued. In it, the cruise company expressed “its deepest sorrow for this terrible accident.”

The chaotic evacuation has added to the difficulty in tracking down survivors—with six of those unaccounted for crew members and the others passengers.

In the first hours after the accident late Friday night, three bodies were found in waters near the ship. This was before the discovery Sunday of the two elderly men wearing life vests, said Coast Guard Cmdr. Francesco Paolillo.

“The divers had to remove the life vests to get the bodies out,” he said. Their nationalities were not immediately released. The earlier fatalities were described as two Frenchmen and a Peruvian ship employee.

The divers’ search through the ship, which is lying on its side with a huge gash, had turned more dangerous because of the risk the vessel could suddenly move and sink into waters over a nearby lower sea bed.

Their safety was increasingly threatened by floating objects in the belly of the 290-meter-long liner, as well as muck drastically reducing visibility, Nicastro said.

“There are tents, mattresses, other objects moving which can get tangled in the divers’ equipment,” Nicastro added.

Prosecutor Francesco Verusio confirmed reports prosecutors were investigating allegations the ship’s captain, Schettino, abandoned the stricken liner before all the passengers had escaped.

Asked Sunday by Sky TG24 about the accusations, Verusio replied, “Unfortunately I must confirm that circumstance.”

Paolillo said the captain was spotted on land during the evacuation. Officers had urged him to return to his ship and honor his duty to stay aboard until everyone was safely off the vessel, but Schettino ignored them, he said.

“We did our duty,” Paolillo told The Associated Press.

A French couple who boarded the Concordia in Marseille, Ophelie Gondelle and David Du Pays of Marseille, told the AP they saw the captain in a lifeboat, covered by a blanket, well before all the passengers were off the ship. They insisted on telling a reporter what they saw, so incensed were they that —according to them—the captain had abandoned ship before everyone had been evacuated.

“The commander left before and was on the dock before everyone was off,” said Gondelle, 28, a French military officer.

Schettino insisted he didn’t leave the liner before all passengers were off, saying “we were the last ones to leave the ship.”

Coast guard spokesperson Capt. Filippo Marini told Sky Italia TV that Coast Guard divers have recovered the so-called “black box” with the recording of the navigational details from a compartment now under water.

A Dutch firm has been called in to help extract the fuel from the Concordia’s tanks before any leaks into the area’s pristine waters. No leaks have so far been reported.

While ship owner Costa has insisted it was following the same route it took every week between the Italian ports of Civitavecchia and Savona, residents on the island of Giglio said they had never seen the Costa come so close to the Le Scole reefs and rocks that jut from Giglio’s eastern side.

Many passengers complained the crew didn’t give them good directions on how to evacuate and once the emergency became clear, delayed lowering the lifeboats until the ship was listing too heavily for many to be released.

Other passengers said crew members told them for 45 minutes that there was a simple “technical problem” that had caused the lights to go off.

When a man asked a crew member in Spanish why he was wearing a life vest, the crew member didn’t answer and continued on his way. Jerry E. Esplanada, AP