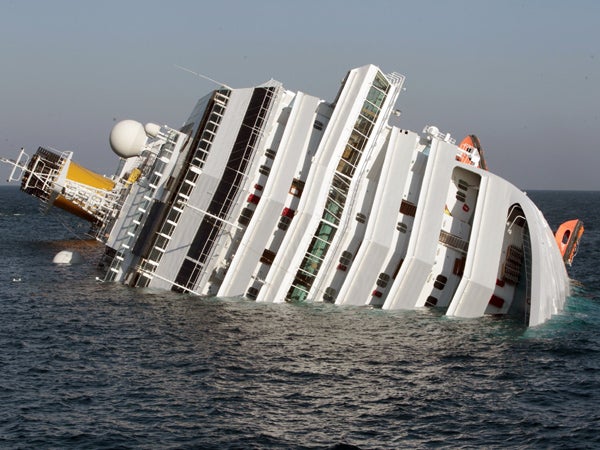 A luxury cruise ship Costa Concordia leans on its side after running aground the tiny Tuscan island of Giglio, Italy, Saturday (January 14, 2012), sending water pouring in through a 160-foot (50-meter) gash in the hull and forcing the evacuation of some 4,200 people from the listing vessel. GREGORIO BORGIA/ AP PHOTO

MANILA, Philippines—At least two of the 300 Filipino crew members of the Costa Concordia were among those reported injured when the cruise ship ran aground last Friday off the coast of Grosetto in Tuscany, Italy, the Philippine Embassy in Rome reported.

In a report to the Department of Foreign Affairs, Philippine Ambassador to Italy Virgilio Reyes said on Sunday one of the seafarers had a broken arm while another suffered from hypothermia.

Reyes did not identify the injured seamen.

“An official roll call (of the vessel’s 1,000 crew) is still being undertaken,” Reyes said.

The embassy had “dispatched a seven-man emergency response team to Grosetto to evaluate the situation on the ground and to provide the necessary assistance to Philippine nationals.”

“The Filipino seamen are being supported by Magsaysay Shipping Corp., their (Manila-based) manning agency,” the mission said.

Initial reports reaching the embassy disclosed that the cruise ship ran aground “last Friday evening off the coast of Grosetto.”

“Around 4,000 persons were on board the vessel, including 1,000 crew members, around 300 of whom are Filipinos,” the same reports said.

The reports added, “The Italian Coast Guard immediately responded to the scene to rescue the passengers, who were brought to the nearest island, Giglio, in emergency life boats. The passengers and Filipino crew members are temporarily housed at a church, hotels and schools in Giglio. Many of them have been transported to the mainland.”