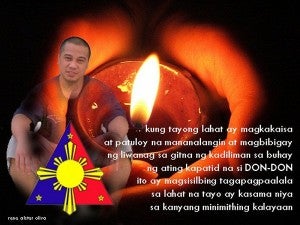 RODELIO “DONDON” Lanuza was forgiven by the family of the man he had killed in 2000. But P35 million in “blood money” for his freedom seemed like an unreachable star.

Fate and luck may finally be working in favor of overseas Filipino worker Rodelio “Dondon” Lanuza, who has been on death row in Dammam, Saudi Arabia for the past 11 years. His tireless internet campaign for justice and assistance has caught the attention of a Filipino-American businesswoman and philanthropist, Loida Nicolas Lewis—as well as a Saudi prince whose identity remains a mystery.

Thirty-seven year old Lanuza, who has always maintained that his killing of a Saudi man in 2000 was an act of self-defense, was finally forgiven by the aggrieved family last February 2011. But he has so far been unable to raise the hefty P35 million (3 million rials or over $800,000)  “blood money” required for his freedom.

Quezon City-raised Lanuza, an architecture student from the Manuel L. Quezon University, has been storming virtual heaven through online social networking sites for many months trying to raise the amount.  But at the end of last year, friends and supporters of Lanuza had raised only $13,000 or barely two percent of the amount needed to give him a second chance at life. A desperate appeal to President Benigno Aquino last year has not gotten an encouraging response.

But new blessings might—just might—shine on Lanuza this year.

Last December, retail magnate Lewis joined the condemned OFW’s mother, Letty Lanuza, in a press conference in New York, reinvigorating the campaign to raise the blood money requirement by February, which marks one year since the pardon was offered.

Lewis has since revealed in a phone interview with the Inquirer that a Saudi prince, whose identity she will keep a mystery for the moment, has offered to match, dollar-for-dollar, the money that Lewis and Lanuza’s mother raise.

“I don’t want to mention his (the Saudi prince’s ) name yet,” Lewis said.  Let’s see first how much money we can raise on our own. “But I can tell you this, he is a member of the Saudi royal family who has been very generous through the years in helping Filipinos, particularly in Mindanao.”

The campaign should be able to show a substantial effort and ground swell for Dondon’s cause.

Lewis will fly to Manila next week to seriously push the fundraising campaign (www.helpdondon.com). She is hoping the Department of Foreign Affairs and the Overseas Workers Welfare Administration, of which Lanuza was once a member, will also contribute a substantial amount. 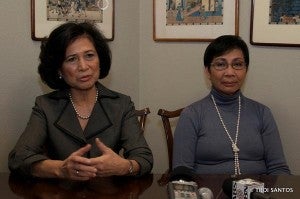 When contacted, DFA spokesperson Raul Hernandez said a technical committee headed by Vice President Jejomar Binay was “still discussing” the issue of blood money for jailed OFWs. Their recommendations will be submitted to the President.

A case of self-defense

With so many OFWs in death row in various parts of the world, why was Lewis particularly drawn to Lanuza’s plight?

She admits a little luck and chance was on Lanuza’s side.  A Bicolano journalist (Joseph Lariosa) had persuaded her to take a look at his case.  Lewis, as is well known, has never forgotten her Bicolano roots and has a soft heart for requests from her townmates.

But it was more than the kabayan connection that got Lanuza through. Lewis is also a lawyer.

“As a lawyer, when I read the brief of his lawyer; it (agitated) my sense of justice. Self-defense is a valid defense for acquittal. And yet he was convicted for premeditated murder.  He should have been acquitted.”

On Aug. 10, 2000 then 27-year-old Lanuza, an architectural draftsman in Dammam, had gone out partying with friends. An apparent extension of the “for-the-road” practice of young boys had led him to the house of their Arab host. Before the night was over a scuffle ensued; Lanuza escaped but the Arab man died. He had argued that it was an act of self-defense.  “I was defending my dignity,” he argued. But like OFW Sarah Balabagan much earlier, he was convicted and sentenced to death.

‘He doesn’t deserve to die’

Lewis does not want to publicly discuss the details of Lanuza’s case anymore.

She appealed: Let’s not rake up anymore what happened that night and why Dondon, ended up stabbing the man. “The aggrieved family has already forgiven him. Let’s not denigrate the memory of their lost loved one anymore. What is important is that Dondon has a chance of getting out of death row,” she urged.

At any rate, she feels strongly that Lanuza “does not deserve to die.”

She added: “This is unlike the case of the Filipino drug mules sentenced to death in China, she added.  “You cannot help (those cases). They knew what they were doing. In Dondon’s case the death was accidental…” she said.

“We Filipinos have to help him because he is our son, our brother, our cousin,” she added.

An aspect of faith also firmed up her conviction. By a twist of chance she met the mother of Lanuza in Manila when she attended a global summit of overseas Filipinos. “She struck me as very prayerful. And she had such faith… like she never doubted, that God would see her son through this ordeal.”

After meeting Lanuza’s mother, Lewis said, “I knew that I had to help him.”

The amount is too big for one or two donors. Lewis has begun sending out letters and public appeals to Filipinos here and abroad to contribute to Dondon’s freedom fund.

Lanuza’s mother has also issued a personal appeal: “We do not have the luxury of time. By February 2012, it would be one year since they (the aggrieved family) forgave my son and agreed to a blood money equivalent.”

“If by that time, we have very little to show to them, it may mean the withdrawal of their forgiveness and hasten the death of Dondon (Lord, spare him!).”

Lewis urged Filipinos here and abroad to give generously  for the cause of justice. Instructions on how to donate are posted on www.helpDondon.com.

Let’s all help give Dondon Lanuza another chance at life.