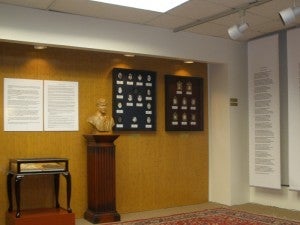 SAN FRANCISCO—A non-profit Philippine foundation has inaugurated a permanent exhibit that features artifacts and other memorabilia about the life and times of Philippine National Hero Dr. Jose Rizal.

The Philippine Folklife Museum Foundation, a non-profit foundation dedicated to the preservation and promotion of Filipino history and culture, opened the exhibit on the 5th floor, Social Hall of the Philippine Consulate at 447 Sutter Street, San Francisco in California.

Anchoring the exhibit is a bust of Dr. Rizal carved by renowned master sculptor Luis Ac-ac of Paete,  Laguna from batikuling wood indigenous to his province. 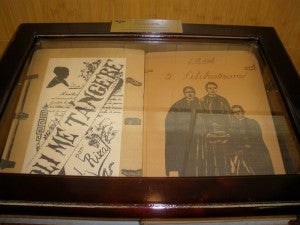 Alongside the sculpture, displayed under glass in a handsome wooden case, are copies of the manuscripts of Dr. Rizal’s two novels which sparked the birth of Philippine nationalism and rebellion against the Spanish  colonizers, “Noli Me Tangere” and “El Filibusterismo”.

Completing the exhibit are three floor-to-ceiling canvas banners, silkscreened in Spanish, English and Tagalog respectively, with the poem penned by Dr. Rizal, “Mi Ultimo Adios”.  This was the hero’s final farewell to his beloved country, written the night preceding his dawn execution by firing squad at Fort Santiago in Intramuros.

Museum Operations and Cultural Chair Lydia de la Cruz announced that modern technology will be introduced to the exhibit via a kiosk featuring an Interactive Touch Screen which will allow visitors fingertip access to computerized information on the life, career, travels and writings of Dr. Jose Rizal.

The Rizaliana exhibit’s opening ceremonies included a program which featured the reading of a Tagalog poem written by Dr. Rizal at the age of 8 entitled “Sa Aking Mga Kabata”.  Ten-year-old Ken Lorenz Hernandez of Concord, California did the reading.  Classic guitarist Michael Gonzalez played “Kundiman ng Lahi” and then teamed up with another classic guitarist, Theresa Calpotura, to play “Tango ni Rizal”.  Ms. Calpotura ended the performance with a solo rendition of Dr. Rizal’s “Pastores de Belen”.  Guests were then treated to a repast catered by culinary consultant and chef Lydia de la Cruz.

The public is invited to visit the museum during business hours.  Other permanent exhibits in the museum include a series of 15 bas-relief wooden sculptures highlighting events throughout Philippine history.  Also on display are pineapple (piña) cloth items, including 3 elegant gowns worn circa 1936 by Philippine first lady Aurora Quezon, wife of President Manuel L. Quezon.  The gowns were given to Mrs. Quezon’s dear friend, the late Mrs. Ann Schinazi.