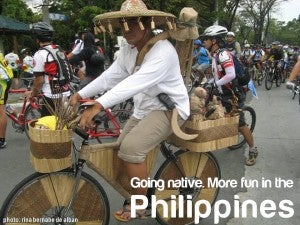 SAN FRANCISCO—I like it. It’s catchy. It’s a flexible slogan.

And most important of all,  we can have fun with it. And many Filipinos are already having fun.

The slogan has something for everyone.

The totally serious and passionate have latched on to the Department of Tourism’s campaign by proclaiming: “It’s more fun in the Philippines because we have the best beaches, best food, best smiles in the world, etc, etc.”

All true, of course. But then there are the wise guys and the kalogs.

Now, yes, the Department of Tourism did fumble the roll out of the new campaign, just like the previous one.

But I think the DOT’s mistake wasn’t embracing a slogan that Switzerland used 60 years ago — it was that the department didn’t have more fun with that fact.

Tourism Secretary Ramon Jimenez defended the slogan by tweeting,  “The line isn’t a manufactured slogan. It’s simply the truth about our country. Don’t be swayed by people who are trying to punch holes in it.”

Instead, Jimenez could have had more fun with a slogan that brags about having more fun in the Philippines. He could have said: ‘Oh, all right, so Switzerland used it 60 years ago! But tell me: can their beaches match our Boracay? Oh, wait — they don’t have beaches. How fun. :(

‘And can anyone seriously say that Bircher muesli is tastier than our champorado with tuyo?

‘And be honest, whom would you rather party with, the Filipinos or the Swiss? Manny Pacquiao or Roger Federer?”

Well, yes, that could have sparked an international tit-for-tat. But even better. We can have fun with it.

Manila should be thrilled with the rapid and dynamic response that the campaign triggered on the Web. I actually have a suggestion: Next time, make the search for a new slogan even more fun — by opening it up to Filipinos worldwide, especially in cyberspace.

Instead of paying a marketing firm to come up with a slogan, why not use Facebook, Twitter and other social media and turn the search into a contest? Ask Filipinos from all corners of the globe for suggestions, and let’s have a lively, spirited debate on the best way to attract visitors to our homeland.

It wouldn’t discourage Filipinos to, as the tourism secretary put it “punch holes” in the campaign. But at least, we can all have fun in coming up with a new slogan.

Besides, let’s face it: Coming up with a slogan for the Philippines will always be tough. In fact, you can say the same thing about many places.

Years ago, a local TV station embraced the slogan, “the most beautiful place on Earth,”  describing the San Francisco Bay Area. Some people would agree — although some visiting Filipino friends routinely complain about how crazy the Bay Area can be. (They’re not too crazy about wacky protesters and the panhandling.)

Having covered crime in the Bay Area as a reporter, I can say the Bay Area is certainly not paradise. In fact, a fellow reporter once launched into a parody of that TV station’s slogan with a mock news report: “And there was another drive-by shooting this evening in the most beautiful place on Earth.”

It claims to be the “happiest place on Earth.” Well, tell that to the parents and some kids standing in long lines for hours in the sun waiting to ride Space Mountain. I’ve gone through this ordeal myself several times — and I wasn’t happy at all.

Read Next
DFA racing to get OFWs out of Syria
EDITORS' PICK
‘Justice will be done,’ Duterte assures as he vowed probe on Jolo incident to bare ‘truth’
EuroMillions Superdraw: A lottery draw unlike any other is coming to the Philippines
Current dominant strain of COVID-19 more infectious than original—study
DOLE: Return of OFWs’ remains from Saudi to be ‘delayed,’ deadline moved to ‘early next week’
Smart releases Hyun Bin’s second TVC
Water remains our saving grace right now
MOST READ
Locsin warns of ‘severest response’ if China’s army drills in SCS ‘spill over’ to PH domain
BREAKING: Duterte signs anti-terror bill into law
Duterte tells military: No other president looked at you the way I did
INQ animated bar graph: How severe is COVID-19 in Southeast Asia
Don't miss out on the latest news and information.