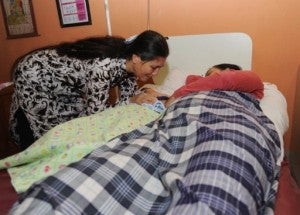 NYUH KUNING—When Putu Itayani came to give birth to her baby daughter last month it could have been a financial disaster.

She had to pay an Indonesian village midwife one million rupiah (about $110) when her son was born in 2009 — the equivalent of two months’ wages for her print worker husband.

Her situation is typical in Indonesia, where access to healthcare is beyond many among the 240 million population, nearly half of whom live on less than $2 a day, and maternal mortality stands at 228 deaths per 100,000 live births.

But instead of having to turn to an unqualified helper or a village shaman, Itayani was able to go to the Yayasan Bumi Sehat — Healthy Earth Foundation — clinic in Nyuh Kuning, near the tourist hub of Ubud on Bali.

“For a poor person like me, this clinic is really a blessing,” said Itayani, 29. “They provide a great service and you only pay what you can afford, or nothing at all.”

“They don’t complain even if you only play a small amount. I’m very satisfied that I gave birth there.”

The clinic is the brainchild of Robin Lim, a 55-year-old Filipina-American who has made it her mission to provide free health and midwifery care to expectant mothers from Indonesia’s legions of poor.

“We open 24/7, and we never turn away people. This is the place where a prostitute and a beggar can have the same treatment as a rich person,” she said.

In many Indonesian villages, most pregnant women cannot afford the minimum one million rupiah childbirth fee levied by government hospitals, and a scheme for free births has to be applied for in advance, a difficult and complicated process that deters poor, uneducated people.

The result is home births with limited help, and the high death rate.

“People think that it’s normal to lose a mother or a child. They don’t think about the suffering,” said Lim, who was born in Arizona but moved to Indonesia in 1992.

Her own sister died of complications during pregnancy in the United States, she says.

“The doctor didn’t care for her. He never took the time and never told her that she had a high blood pressure and she died in pregnancy,” she said.

The loss left her “heartbroken” and “shattered”, and determined her path in life.

“Every mother counts, every mother is important and every child is precious,” she said. “I have to be a midwife so I can live for love everyday.”

As well as the clinic in Bali, the foundation has one in the province of Aceh, at the northern tip of the island of Sumatra.

Both opened in 2005, providing free medicine, prenatal care, birthing services and even yoga lessons to prepare expectant mothers for a comfortable and safe natural birth, and have since helped hundreds of women.

They are funded by donations from friends and family, and also provide paediatric care, as well as acupuncture and Japanese Reiki relaxation classes for the elderly.

All she wanted was “a place where poor people can come to have their baby”, Lim said. “We need to make a more equal society, so that all mothers can live.”

First-time mother Suti, 24, said Lim constantly encouraged her during a long six hour labor before she delivered her baby girl.

“I was fearful because it was my first time. Robin was very supportive and repeatedly said ‘the baby is healthy’ which gave me the strength to push on,” the fruit vendor told AFP.

“To me, she is the mother of all heroes.”

Lim says her work is far from done and is now planning to build a bigger clinic powered by solar energy.

Read Next
Ransom demanded for Australian—police
EDITORS' PICK
Defend Your Health! Shop health essentials from home with Rose Pharmacy’s Online Sale
COVID-19 wards in 2 more hospitals reach full capacity
Navotas will be on lockdown from July 16 to 29 – Tiangco
Water remains our saving grace right now
World-standard accounting: Unlocking your financial potential
Chatting with companions, answering calls on MRT 3 trains banned
MOST READ
Vilma Santos-Recto ‘prepared’ to face ‘consequences’ over ABS-CBN franchise vote
‘I am not my father,’ says daughter of lawmaker who voted to deny ABS-CBN franchise
Did a meme get on Agot Isidro’s nerves? She’s asking ’24 Oras’ to fact-check it
In slap on face of PH, China replies to Locsin on tribunal ruling: It’s invalid
Don't miss out on the latest news and information.