Foreign donations, aid from Filipinos abroad continue to pour in for Sendong victims 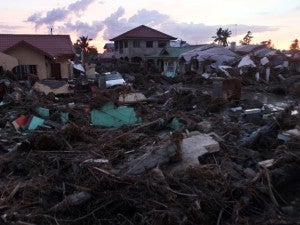 MANILA, Philippines—Donations and pledges, including aid from Filipino communities, continue to pour in from all over the world for the victims of Tropical Storm “Sendong.”

The government of New Zealand has contributed $500,000 to the relief efforts of the Philippine Red Cross to provide food, blankets, water and sanitation, shelter and livelihood assistance to 25,000 people in the worst affected areas in northern Mindanao and Visayas, according to the Department of Foreign Affairs. The humanitarian effort was joined by officers and staff of the Philippine Embassy in Wellington by donating $1,000.

In Hawaii, the Filipino community there raised $44,000 in cash and pledges for the victims in Cagayan de Oro and Iligan cities, which were ravaged by killer floods a week before Christmas. About 100 volunteers gathered at the Filipino Community Center in Waipahu on December 26 to man phone lines as they appealed to compatriots and friends from across the state for donations.

In a report to the DFA, the Philippine Consulate General in Honolulu said the one-day drive netted about $30,000 in actual donations and $14,000 in pledges.

As of December 28, the Philippine government has already received over US$12.6 million worth of foreign donations and pledges for the storm victims, according to the DFA.

In a statement, the DFA said it has received US$12,613,473.87 worth of aid from Filipino communities, Philippine Embassies and Consulates General around the world and private individuals and groups.

However, the amount does not include donations/pledges without equivalent monetary value.

Filipino communities abroad have also sent in their assistance.

The Filipino community in Guam donated US$3,956 in cash, while the Laguna Association of Guam gave US$500 in cash.

Private individuals and businesses have also donated to the cause.

Russian businessmen and the Dalai Lama Trust gave US$20,000 and US$50,000 in pledges, respectively. The Chinese Chamber of Commerce in Guam provided US$14,420 in cash and the Philippine Consulate General in Guam collected money from various individuals which totaled US$2,895.

Last December 22, the United Nations launched a consolidated flash appeal for humanitarian assistance with the humanitarian community and the Philippine government and raised US$28,576,819.

The International Organization for Migration has an initial appeal of US$50,000 and its Philippine office has dispatched a team, which conducted needs assessment in Mindanao and is providing relief support.

Currently, a four-member delegation from the Organization of Islamic Conference is now in the flood-stricken areas to assess the devastation, and also to look into how the member-states of the OIC could extend assistance to the affected communities.

According to the National Disaster Risk Reduction and Management Council, Sendong’s death toll rose to 1,257 with hundreds still missing, while damage to property so far reached a staggering P1.382 billion.

Read Next
What if Rizal had lived?
EDITORS' PICK
Gilas out to prove Korea win not a fluke; Tab fires back at ‘lucky shot’ remark
Piolo Pascual: The Ultimate Heartthrob continues to level up
SANTIS Delicatessen: The road to survival is sweet and savory
LOOK: ‘Low vaccination’ turnout in 4 Manila sites after no walk-in policy
Internet: Overcoming pandemic lockdowns
Eleazar: PNP open to ICC probe but PH judicial process is working
MOST READ
Lacson or Pacquiao a possible presidential candidate for NPC – Sotto
Palace: Face shields no longer needed to be worn outdoors
Duterte to issue memo on face shields this week
DFA opening 10 satellite offices to boost passport services
Don't miss out on the latest news and information.