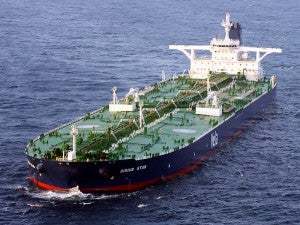 Liberian-flagged oil tanker MV Sirius Star is at anchor in the Indian Ocean, off the coast of Somalia after pirates seized the Saudi supertanker loaded with $100 million in crude oil. AP File Photo

NAIROBI, Kenya—Supertankers — the hulking, slow-moving ships that transport half the world’s oil — have few defenses against terrorist hijackers like those envisioned by Osama bin Laden, security experts said Saturday.

Al-Qaeda operatives with enough training could easily manage to capture ships carrying millions of gallons of oil or liquefied natural gas. All they would have to do is imitate the tactics of Somali pirates who already use small boats to overpower tanker crews in mostly remote locations, the experts said. Few supertankers have armed guards, due to gun import laws and the risk of accidental gunfire igniting explosive cargos.

But once terrorists captured a supertanker, it wouldn’t be so easy to sow the economic chaos and costly environmental destruction bin Laden desired and outlined in secret files captured from his Pakistan hideout. It’s actually extremely complex to blow up a supertanker or even sink it near heavily guarded oil shipping lanes like the Suez Canal, the Panama Canal or the Strait of Hormuz at the end of the Persian Gulf.

“It would only be a risk if they could sail it undetected and had worked out how to blow it up, which is pretty complicated,” said Graeme Gibbon-Brooks, the head of Dryad Maritime Intelligence.

The FBI and the US Department of Homeland Security issued a confidential warning to authorities and the energy industry Friday that al-Qaeda was seeking information on the size and construction of tankers.

The newly revealed plot showed that while bin Laden was scheming about the next strike to kill thousands of Americans, he also believed an attack on the oil industry in “non-Muslim waters” could create a worldwide economic panic that would send oil prices soaring and hurt Westerners at the gas pump.

Other bin Laden documents revealed that the terror group identified New York, Washington, Los Angeles and Chicago as important cities that should be attacked. Al-Qaeda also identified key dates for those attacks, including the 10th anniversary of the September 11, 2001 attacks, Christmas, July 4th and during Obama’s State of the Union address in January.

Oil already is a known target. On Saturday, a truck tanker carrying oil for NATO forces in Afghanistan exploded in northwestern Pakistan as people tried to siphon off fuel, killing 15. Fourteen other NATO oil trucks were damaged in a bombing at a nearby border town, but no one was hurt.

The hundreds of seafaring oil tankers that travel across the planet daily are theoretically capable of igniting massive fires with the capability for extensive destruction.

Intelligence gathered from bin Laden’s hideout revealed that al-Qaeda realized the tankers would have to be boarded so explosives could be planted inside them. Security experts say, however, blowing them up would be difficult because the tankers have double hulls and compartmentalized holds that prevent oil spills in groundings and can withstand direct hits from rocket propelled grenades.

Plus, getting enough explosives aboard the tankers would mean using more speedboats than Somali hijackers normally do to take over the ships and hold crews hostage, Gibbon-Brooks said.

Somali pirates have already captured five supertankers, proving that men with little training and basic weapons can easily seize the giant ships. Supertankers move slowly when fully loaded, can be longer than three football fields and generally only have around 20 unarmed crew onboard.

Although the size of the ships makes them vulnerable, their slow speed also makes it harder for terrorists to sneak one into a port or a narrow shipping passage. Ships are closely tracked via satellite and any unexplained deviations from their travel plans would immediately raise alarms.

While al-Qaeda’s most brazen sea attack was on the USS Cole in Yemen, the explosives that knocked a hole in the destroyer and killed 17 sailors in 2000 would not sink a double-hulled oil tanker.

Other marine attacks have been botched. An attempt to blow up the USS The Sullivans warship failed in 2000 when the plotters overloaded their speedboat with explosives and it sank en route to the mission.

The 2002 suicide bombing of a tanker off the coast of Yemen damaged the ship but didn’t sink it. And last year a suicide bomber only slightly damaged the Japanese tanker M. Star in the Straits of Hormuz, which handles 40 percent of the world’s tanker traffic. An obscure al-Qaeda-linked group claimed responsibility.

After those attempts, al-Qaeda decided attackers have to board a ship and blow it up from the inside, according to documents seized by US special forces from the compound where bin Laden was killed nearly three weeks ago.

Despite the difficulties, warnings abound that several groups have the capability to pull off a terror attack on a supertanker, especially in Asian waters.

The al-Qaeda-affiliated Abu Sayyaf extremists remotely detonated a bomb on a ferry in Manila Bay in the Philippines in 2004, igniting an inferno that killed 116 people.

Small cargo barges and fishing boats have been attacked by militants, some of whom have taken diving lessons that Filipino authorities suspect were preludes to maritime attacks. In March 2010, Singapore’s navy raised its security alert, warning that an unspecified terrorist group was planning attacks on oil tankers and other vessels in the Malacca Strait, which separates Malaysia from the Indonesian island of Sumatra.

While authorities fear that al-Qaeda may link up with the Somali pirates who have become so adept at hijacking cargo ships, experts say the chance of any such alliance is remote because the pirates are in the hijacking business for the multimillion-dollar ransoms they get from holding ship crews hostage.

If the pirates started working with terrorists, that could seriously hurt their business, said Roger Middleton, a piracy expert with London’s Chatham House think tank.

“They’re multimillionaires running a very important business and don’t want to see that jeopardized by too much politics,” he said.

To counter attacks, tanker owners have begun putting barbed wire around ship guardrails and installing firehoses that can launch high pressure jets of water at attackers. They are also installing bulletproof glass around ship bridges and accommodation quarters, a vessel’s two most vulnerable areas, said Chris Austen, the head of Maritime and Underwater Security Consultants.

Some shipping companies also insist their tankers travel through pirate-infested waters only in convoys, added Crispian Cuss, program director at Olive Group, one of the biggest security companies working in the Middle East.

If hijackers decide they can’t get onboard and steer a ship toward a target without detection, they might try to seize a vessel in port — but that would be much riskier given the global port security measures in effect in the last decade.

Security levels vary, but the ports that terrorists value the most generally have the heaviest protection, Cuss said.

“A port in Sudan is not going to have the same level of security as Houston,” he said.

The latest plots show that bin Laden was clearly thinking about the economic consequences of his attacks and might even have been planning a devastating oil spill, said Tim Hart, a maritime security analyst at Maritime and Underwater Security Consultants.
That means Western security forces might have to take strong action sometime at sea.

In 2007, a Japanese tanker was hijacked carrying 40,000 tons of benzene, a highly explosive chemical. Intelligence officials feared at first that terrorists might try to crash the tanker into an offshore oil platform or use it as a gigantic bomb. In the end, it proved to be just another attack by pirates seeking ransom.

Naval forces were, however, ready to attack the ship and blow it up at sea if it approached populated areas, a Western diplomat confirmed, speaking on condition of anonymity because he was not authorized to talk to the media.

With reports from Cassandra Vinograd, Raphael Satter and Meera Selva in London; Adam Schreck in Dubai; and Jim Gomez in Manila, Philippines