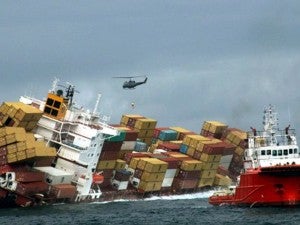 Grounded container ship 'Rena' listing heavily to starboard in the Bay of Plenty near Tauranga. New Zealand faces its worst maritime pollution disaster in decades if the 'Rena' breaks up on Astrolabe reef, releasing all 1,700 tons of heavy fuel oil aboard into the bay. AFP/MARITIME NEW ZEALAND/Tim JOHNS

WELLINGTON —Officers of a ship that ploughed into a New Zealand reef causing the country’s worst maritime pollution disaster faced fresh charges on Wednesday for altering documents after the grounding.

The Rena’s Filipino captain and second officer have already been charged with operating a vessel in a manner causing unnecessary danger or risk and discharging harmful substances.

The new charge of attempting to pervert the course of justice comes with a maximum jail sentence of seven years.

The Rena remains stuck fast on the Astrolabe Reef off the North Island resort area of Tauranga more than two months after the incident in which hundreds of tons of oil spilled into the sea harming wildlife and beaches.