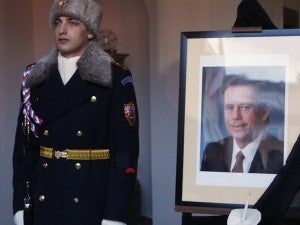 A guard of honor stands next to a portrait of former Czech President Vaclav Havel at the Prague Castle in Prague, Czech Republic, Sunday, Dec. 18, 2011. Havel, the dissident playwright who wove theater into politics to peacefully bring down communism in Czechoslovakia and become a hero of the epic struggle that ended the Cold War, died Sunday in Prague. He was 75. AP PHOTO/PETR DAVID JOSEK

Malacañang on Monday joined the rest of the world in condoling with  the Czech Republic following the death of its former president, Vaclav Havel, on Sunday.

“We mourn the loss of Mr. Vaclav Havel and we offer our condolences to the Czech people on his passing,” presidential spokesperson Edwin Lacierda said.

Lacierda hailed Havel, a dissident playwright in the 1970s, for being “a shining light in the fight against communism.”

“He was able to provide leadership during those troubled times and he was able to shepherd the Czech Republic,” Lacierda said.

Havel also attended a staging of his 1965 play, “The Memorandum,” a satire on bureaucratic gibberish, at the Cultural Center of the Philippines.

In a press conference after the  play, he addressed Filipino writers and intellectuals, telling them that they “should not fear to enter politics.” With  Lawrence de Guzman, Inquirer Research