Saving the charismatic ‘gardeners of the sea’ 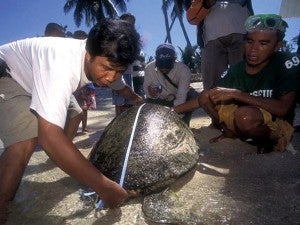 It began with the turtles, the charismatic “gardeners of the sea” and living barometers of the state of the world’s oceans. Years ago, turtles were abundant, especially in the Sulu-Sulawesi Marine Ecoregion (SSME), home of the world’s greatest marine biodiversity. Here, in this one million-square kilometer area that supports 40 million people and billion-dollar tourism and fisheries industries, five of the world’s seven species of sea turtles are known to nest, breed, or feed.

In the SSME, initial efforts to conserve turtles focused on turtle populations from Berau in Indonesia to the Turtle Islands Heritage Protected Area in the Philippines and Malaysia, in the area dubbed as the Sea Turtle Corridor. Satellite tagging has revealed, however, that the animals wander far beyond those boundaries, prompting the extension of the corridor, and strengthening the argument that the network of marine protected areas (MPAs) for turtles should be expanded and treated as a regional unit.

Such findings, coupled with increasing region-wide threats to the animal throughout its entire life cycle—from the targeted sea turtle fisheries by local as well as foreign fishing vessels; consumption of turtle meat, eggs, and hatchlings by predators; to poaching for its shell; habitat degradation; pollution, and mortality as fishing by-catch—have made turtle protection a matter that transcends geographic lines. Thus, the vision of a transboundary MPA network for marine turtles began to take shape.

In 2006, the three countries of the SSME—Indonesia, Malaysia, and the Philippines—established a Tri-National Committee to govern the ecoregion, and under which three subcommittees were assigned to respectively address threatened, charismatic, and migratory species; marine protected areas (MPA) and
networks; and fisheries. Supporting the effective ecosystem-based management of existing and new MPAs and networks, in order to conserve marine resources and support human communities for the long term, is an objective of the Subcommittee on Marine Protected Areas (MPAs) and Networks, in alignment with its goal of policy formulation for sustainable fisheries, aquaculture, living aquatic resources, trade, and livelihood in the SSME.

“Conserving the marine biodiversity in the SSME requires concerted efforts from all of us,” noted Agus Dermawan, Director for Conservation and Marine National Parks under the Ministry of Marine Affairs and Fisheries of Indonesia. “To direct efforts on one area only or in one country alone would not be adequate as many species still need to migrate at certain times of their life history, crossing over political boundaries of nations. Such a situation requires cooperation among the nations concerned,” he said.

The three subcommittees’ respective Action Plans, which are articulations of the broader SSME Ecoregion Conservation Plan developed in 2003, were launched at the East Asian Seas (EAS) Congress in Manila in 2009. They will be integrated into the SSME Comprehensive Action Plans, which will outline
priority projects and possible sources of funding. The MPA Subcommittee’s Action Plan, in particular, is also aligned with Goal No. 3 of the Regional Plan of Action of the Coral Triangle Initiative; the SSME is considered the apex of the Coral Triangle, the larger ecoregion encompassing six countries that is home to the world’s largest concentration of coral species. This goal pushes the establishment of “comprehensive, ecologically representative and well managed” MPAs in the SSME, with a vision of a regionwide Coral Triangle MPA System in the future.

In 2009, the SSME adopted the design of a transboundary network of MPAs for the protection of marine turtles, covering the following initial sites: the Tubbataha Reef World Heritage Site in the Philippines; the Sugud Islands Marine Conservation Area, the Sipadan Island Protected Area, and the Tun Sakaran Marine Park in Malaysia; the Turtle Islands Heritage Protected Area in Malaysia and the Philippines; and the Berau Marine Conservation Area and the Bunaken National Marine Park in Indonesia. Lessons from the experiences of various existing MPAs all over the region—among them the decentralization of management and an effective park fee system in the Bunaken National Marine Park, border patrolling in the Turtle Islands Park-Malaysia, and longterm data gathering and integrated conservation in the Turtle Islands Wildlife Sanctuary in the Philippines—will serve to enlighten future efforts.

“The progress achieved by the SSME cooperation was one of the things that the Philippine delegation was proud to report at the COP 10 of the Convention on Biological Diversity,” said Theresa Mundita Lim, the Protected Areas and Wildlife Bureau director of the Philippine’s environment department (The Philippines is the current chair of the Tri-National Committee for the SSME). “We encourage donor institutions to continue and increase their support to the SSME as a model transboundary multi-country seascape that can be replicated in other seascapes within the Coral Triangle and beyond.”