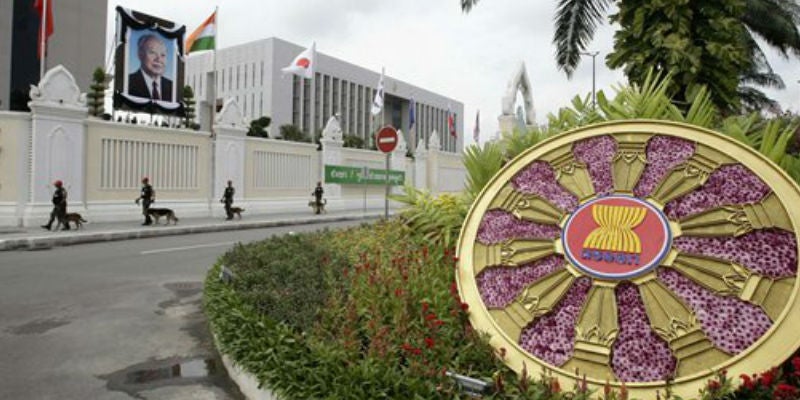 Cambodian security personnel patrol with their sniffing dogs under a portrait of Cambodia’s late King Sihanouk placed in front of the Peace Palace during the Association of Southeast Asian Nations Summit and related meetings in Phnom Penh, Cambodia, Sunday, Nov. 18, 2012. Southeast Asian leaders on Sunday endorsed a human rights declaration that they called a breakthrough for the region but critics said it fell well below global standards. AP PHOTO/HENG SINITH

MANILA, Philippines — Eight more human trafficking victims in Cambodia may be repatriated to the Philippines by Friday or Saturday.

According to Philippine Embassy in Phnom Penh, Cambodia Minister and Consul General Emma Sarne, they have been coordinating with the general department of intelligence for the transfer of the victims to the embassy.

Once transferred, the victims will receive welfare assistance and will be repatriated to the Philippines.

“We have the funds ready, we are just awaiting po and we are negotiating with the police po for their transfer to the embassy. Hopefully, within the week po,” Sarne said during the Senate Committee on Women, Children, Family Relations and Gender Equality hearing.

(If they can be released today, which is Wednesday, hopefully by Friday or Saturday morning, they will be in the Philippines already.)

Hontiveros asked the Department of Migrant Workers (DMW) for their assistance to the trafficking victims.

DMW Undersecretary Bernard Olalia replied that reintegration services, including psychosocial support and financial and livelihood assistance, will be provided.

Hontiveros’ committee is investigating the reported human trafficking of Filipinos to other Southeast Asian countries.