President of the Republic of the Philippines

We, the undersigned, commend your Administration’s critical interventions to sustain economic growth in the country amid high inflationary pressures from the continuing Russia-Ukraine conflict, global supply disruptions, and recessions. We support your whole-of-government approach in working towards the country’s continued recovery from the impact of the pandemic and the elevated uncertainty in the international economic environment.  We trust in the merit of your economic plans for the country and fully support the digitalization of government processes as a way to improve efficiency in our operations.  Further to your 8-point socioeconomic agenda, we stand ready to work with your Administration in “protecting the purchasing power of families by ensuring food security, reducing transport and logistics costs…”

Unfortunately, the Philippine Ports Authority (PPA) does not seem to be on board with your economic plans for the country. There is wide consensus among stakeholders that the PPA’s proposed additional container monitoring system, the Trusted Operator Program-Container Registry Monitoring System (TOP-CRMS) and Empty Container Storage Shared Service Facility (ECSSSF) under PPA Administrative Order No. AO-04-2021 (PPA-AO-04-2021), will end up derailing your Administration’s economic recovery efforts.

The implementation of the TOP-CRMS/ECSSSF has been consistently and vehemently opposed by various stakeholders since the first public consultation held on June 15, 2021.

Our objections are outlined below:

Our estimates indicate that the direct financial cost alone from the additional insurance fees, transaction fees, and trucking fees required by TOP-CRMS/ECSSSF will result in an almost 50% increase in the cost of importing goods.  In real terms, this will lead to a staggering additional annual import cost estimate of at least PHP 35 Billion.

This shocking amount does not even include the other incidental costs arising from the implementation of TOP-CRMS/ECSSSF. The PPA’s plan to require the transfer of empty containers to a 10-hectare facility and other PPA-authorized staging facilities outside the ports will create additional bottlenecks for all containers going in and out of the Manila Ports, leading to severe congestion in the surrounding areas in Metro Manila, driving up the costs for overhead, labor, equipment, and external services. All these could significantly increase the program’s actual cost to the economy.

The PPA fails to consider that the ultimate victim of these additional costs is the ordinary Filipino consumer, who is already bleeding from an inflation rate of 8.1%.

It is unclear if the PPA has even considered reaching out to the National Economic and Development Authority (NEDA) to fully understand the impact of PPA AO-04-2021 and TOP-CRMS/ECSSSF, especially at a time when the country is reeling from the effects of the pandemic, the Russia-Ukraine conflict, fuel price volatility, and global supply chain disruptions.

We laud and fully support your Administration’s fight against smuggling and we are one with you in finding effective solutions. We, however, urge your Administration to carefully assess whether programs being sold to the public as a “solution to smuggling” are indeed as claimed.

Notably, in a Trucking Summit organized by PPA on January 16, 2023, it was categorically admitted by PPA officials that (1) the TOP-CRMS was NOT designed to address smuggling and that its relationship to smuggling is MERELY INCIDENTAL; and (2) that its real focus is the return of empty containers and container deposits. This surprising turnaround belies earlier claims that the TOP CRMS is an effective anti-smuggling tool.

Moreover, the tracking of containers is just one part of curbing smuggling and is already being implemented by Customs pursuant to its mandate under the Customs Modernization and Tariff Act (CMTA). Recent digitalization programs launched by the Bureau have shown progress as evidenced by the 34.1% increase in its 2022 collections vs. 2021. Customs digitalization has also improved the BOC’s capability to detect the more sophisticated forms of customs fraud, such as misdeclaration, misclassification, and undervaluation. This is in line with international experience that solving smuggling in its various forms requires a holistic, whole-of-government approach anchored on (1) getting advanced information on import shipments before arrival in any Philippine port; (2) a modern risk management system; (3) eliminating human intervention in regulatory clearance processing; (4) the full digitalization of the Customs systems; (5) the full implementation of the National Single Window (NSW) to interconnect regulating agencies with the Bureau of Customs and serve as an institutional platform for inter-agency collaboration that will allow the exchange of trade data.  The foregoing holistic approach considered in the digitalization and modernization strategy adopted by the Bureau of Customs in bringing itself to global standards got the support of World Bank to finance the Philippine Customs Modernization Program worth USD 88.28 Million.

Finally, the TOP-CRMS is a clear usurpation of Customs function.   Combating smuggling and the monitoring of containers from the time of discharge from the vessel up to loading for export are among the primary responsibilities of the Bureau of Customs, while the PPA’s role under its charter is the development and administration of ports falling within its administrative jurisdiction.

The issue of container deposit is among the issues currently being discussed in the halls of Congress under House Bill No. 04933. PPA should not preempt action being taken by the legislative branch of government and assume upon itself the role of the regulator of international shipping lines, which it is most definitely not.  This matter should be left to the final determination of Congress, which aims to settle issues involving fees and charges imposed by international shipping lines. Under House Bill No. 04933.
The Maritime Industry Authority is proposed to be the regulatory body over fees and charges imposed by international carriers.

The solution to port congestion lies in the development of port infrastructure and maximizing the assets that PPA already has and not what it will still acquire, accredit or purchase. The TOP-CRMS/ECSSSF, from what it claims to achieve, is more of a restrictive plan aimed at diverting the growing volume of containers to another location which would keep the problem out of sight of the port and present a false picture of the real situation.

Utilizing space at the off-dock container yards accredited by PPA for the use of all shipping lines to ease the demand for space inside the terminal is merely a palliative measure that is destined to fail in the short term. As the economy expands, the increased demand for more space will heighten as bigger vessels begin to come in and import volume continues to grow year on year.   Import volume for 2022 grew by 8% over the 2021 volume, already exceeding pre-pandemic levels by 6%.  With the Philippine GDP expected to grow by 6.5% in 2023 despite a looming global economic slowdown and with the steady increase in volume, these container yards will begin to swell with empty containers, thus exacerbating the problem and making the situation reach its tipping point.

TOP-CRMS/ECSSSF will require truckers and other service providers to register under one system, which would then nominate and assign them to individual transactions (i.e., empty reposition). This demolishes the autonomy of shipping lines and truckers to negotiate, manage and monitor their current and prospective vendors. This feature in the proposed system creates a monopoly where multiple service providers are at the mercy of the winning bidder for TOP-CRMS, a serious concern under the Philippine Competition Act.

Administrative Order No. 44 Series of 2021 and the NEDA-PCC Joint Memorandum Circular No. 01-2020 (JMC 01-2020) clearly require the PPA to ensure that “all policies, laws and regulations, issuances and other interventions shall promote market efficiency and enhancement of consumer welfare, and shall not distort competition by creating barriers to entry…” To this end, PPA is required to “review relevant policies, rules and regulations, issuances, and other interventions to determine whether they restrict, prevent, or lessen competition or render undue advantage to some firms within the sector or industry, and where appropriate, amend or eliminate these policies and interventions.” Despite its clear obligation under AO No. 44, PPA has done no such competition impact analysis and has therefore failed to comply with one of the country’s landmark competition policies.

Section 5 of the Ease of Doing Business Act (RA 11032) provides that “all proposed regulations of government agencies shall undergo regulatory impact assessment to establish if the proposed regulation does not add undue regulatory burden and cost to these agencies and the applicants or requesting parties.” The PPA has never conducted a Regulatory Impact Assessment (RIA) to ARTA, in relation to PPA AO-04-2021. This was confirmed by the ARTA staff during a series of meetings with stakeholders. The PPA’s failure to undertake an evaluation of the potentially disastrous cost implications of implementing TOP-CRMS/ECSSSF is a major red flag that should alarm your Administration.

No less than the fundamental law of the land recognizes the importance of effective stakeholder engagement in governance. Section 16 Article XIII, of the 1987 Constitution expressly states that “the right of the people and their organizations to effective and reasonable participation at all levels of social, political, and economic decision-making shall not be abridged. The State shall, by law, facilitate the establishment of adequate consultation mechanisms.”

Stakeholder consultation is also an internationally-recognized requirement in the design of regulations. Under the ASEAN Guidelines on Good Regulatory Practices (2009), each Regulatory Impact Statement must have an attached report describing the design, process, and results of all efforts toward stakeholder engagement and public consultations. In the express interest of transparency, the ASEAN prescribes that, in public consultations: (1) all stakeholders, including consumers and businesses, should have access to the draft proposals and the opportunity to submit comments; (2) comments from all stakeholders must be adequately considered and analyzed, and (3) the policy-maker must respond to significant points in the comments and explain the rationale for revisions before adopting the final regulation.

Contrary to the above Guidelines, the PPA held only one public consultation on June 15, 2021 prior to the issuance of PPA-AO-04-2021 on September 22, 2021, and this consultation only involved select stakeholders. To the dismay of stakeholders, succeeding consultations dealt with the proposed implementing operational guidelines already. Worse, even after supposedly “listening” to the comments, the PPA has continuously disregarded stakeholders’ continuing written objections to TOP-CRMS/ECSSSF without any valid explanation. Likewise, position papers expressing strong opposition to PPA AO 04-2021 have remained unanswered to date, much less in writing.

In 2014, the “lack of rigorous analysis of policy options and lack of proper coordination with stakeholders” resulted in disastrous port congestion with an economic cost of at least PHP43.8 Billion. The country simply cannot afford a repeat of the 2014 fiasco in these already troubled times.

As PPA AO 04-2021 threatens to cripple the transport and logistics industries and the national economy as a whole, we, the undersigned, stand in unity and call for: 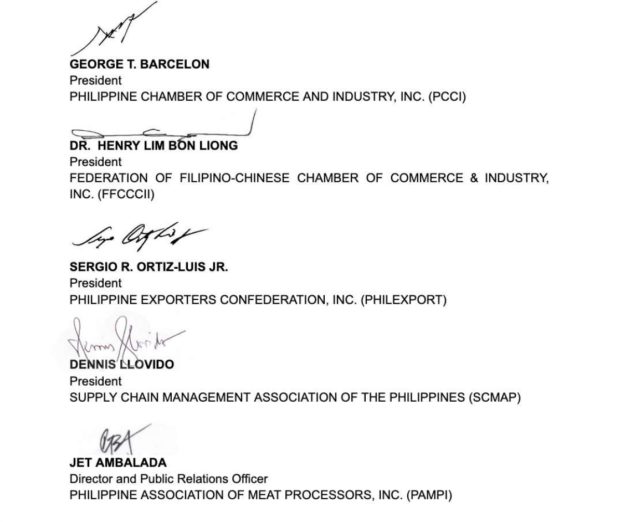 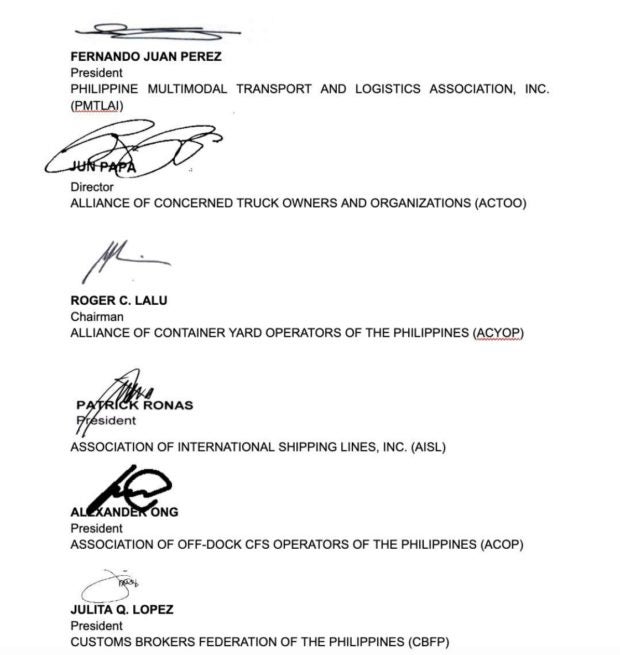 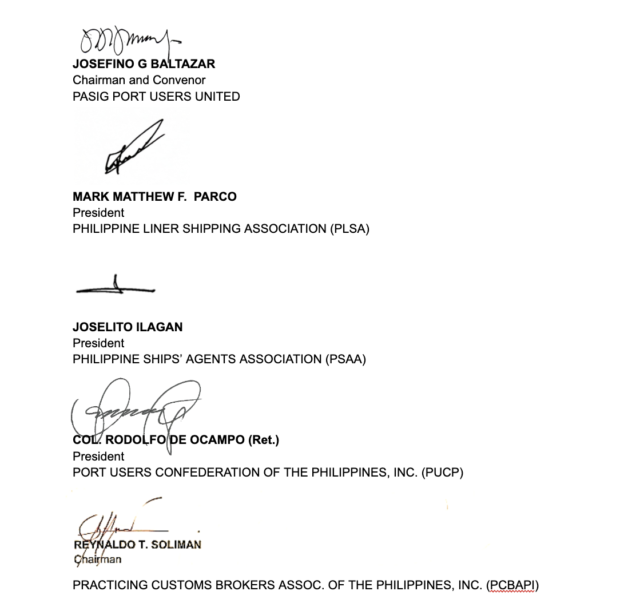 President, Senate of the Philippines

Secretary, Department of Trade and Industry