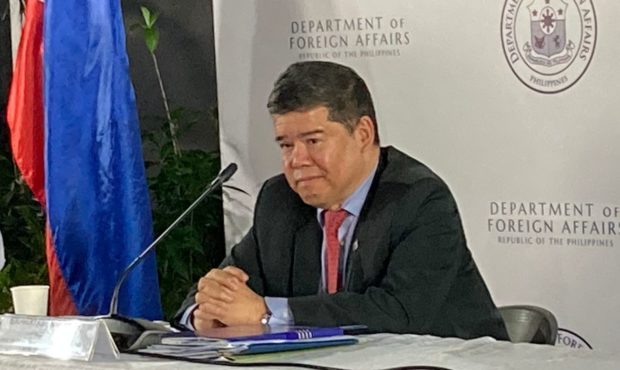 Foreign Affairs Undersecretary Eduardo de Vega faces the media in a press conference at the department’s office in Pasay City on Thursday, August 11.

MANILA, Philippines — A Department of Foreign Affairs (DFA) official was grilled by senators on Tuesday over the zero acquittal of overseas Filipinos from criminal cases from January to June last year.

During the Senate committee on migrant workers hearing, Senate Majority Leader Joel Villanueva shared the DFA’s report showing zero acquittals while 1,278 individuals were convicted in the first half of 2022.

DFA Undersecretary Eduardo Jose De Vega said they do not get a lot of acquittals a year.

“Offhand, I hope — kasi (because) I was not undersecretary then — we don’t get a lot of acquittals. That’s the fact,” De Vega said.

(What happens is, most of the time, cases are settled and not pushed through.)

Villanueva said that the situation was “unacceptable.”

“This is not acceptable. These are facts. These are figures that we have on our hand. We wanted to find out ilan ‘yung na-acquit (how many were acquitted)? Kung walang na-a-acquit (If none), what the hell are we doing here? We don’t even evaluate the things that we do,” the senator pointed out.

“May weak evidence gathering ba tayo? ‘Yung mekanismo ba may problema? Talaga bang kulang iyong legal representation natin du’n sa mga benepisyaryo from sa start of the case o late na tayo nakapasok kasi dahil ganu’n? That’s what we wanted to find out kasi that’s the only way we can improve our services to our people,” he went on.

(Do we have weak evidence gathering? Do we have a problem with the mechanism? Do we really lack legal representation for beneficiaries from the start of the case, or are they entering late? That’s what we wanted to find out because that’s the only way we can improve our services to our people)

(Maybe the lawyers that the DFA deployed are weak to defend our Filipino nationals who have problems abroad.)

De Vega asserted that at least overseas Filipinos are getting legal representation than none.