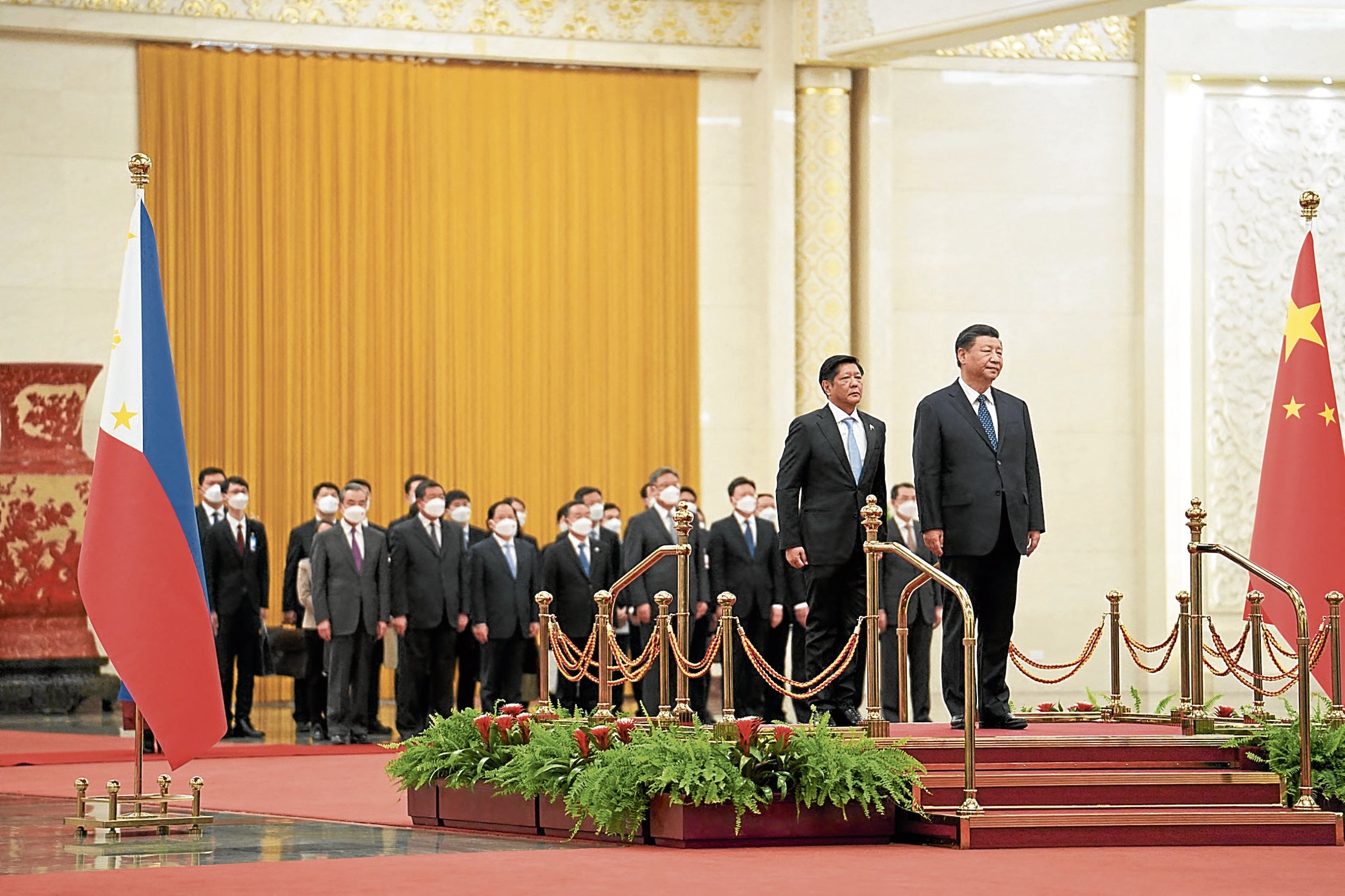 BEIJING — Chinese President Xi Jinping has promised to “find a compromise and find a solution” that will allow Filipinos to fish again in their “natural” fishing grounds in the West Philippine Sea where China and the Philippines could also conduct joint oil exploration, President Ferdinand “Bongbong” Marcos Jr. said.

“Clearly, that’s a very important issue for us and maybe after we came to agreement with President Xi that this is an important aspect of our relationship and it’s something that is easily remedied,” Marcos said of the fishing issue on Thursday after his meeting with the Chinese leader the previous night.

“When we get back, the foreign secretary and his counterpart will finalize the organization of that and the situation of fishermen will be number one on the agenda,” he told reporters without elaborating on Xi’s promise.

China claims nearly all of the South China Sea, including the West Philippine Sea, waters within the country’s 370-kilometer exclusive economic zone (EEZ), along with its offshore oil and gas deposits and traditional fishing grounds.

Its coast guard and its maritime militia have been constantly chasing Filipino fishermen away from their traditional fishing grounds within the Philippines’ EEZ.

A 2016 ruling by an international arbitral tribunal reaffirmed Philippine sovereignty over its exclusive economic zone and invalidated China’s historical claims to virtually all of the South China Sea.

Marcos said he welcomed Xi’s offer to resume joint oil and gas exploration talks, which the Duterte administration terminated due to constitutional constraints.

He said the “legal aspects” of any joint exploration would have to be discussed.

“The central issue is sovereignty and sovereign rights. I think that is where the wiggle room is,” he told Filipino journalists who were traveling with him.

Senate Minority Leader Aquilino Pimentel III said in a statement that the people would demand that both sides be “100 percent transparent” about any oil exploration negotiations.

“The purpose of transparency is for us to know if the agreement is compliant with our Constitution,” he said.

“It is key to gain the support and confidence of the Filipino people and erase any doubts that the government is compromising and giving up our rights over the West Philippine Sea,” Pimentel said.

A minority lawmaker in the House of Representatives also called for transparency in any joint oil exploration with China.

ACT Teachers party list Rep. France Castro said any agreement with China should not include a clause that would require the Philippines to waive defense on the basis of sovereignty over its patrimonial assets and to resolve disputes in a Chinese tribunal in China or Hong Kong following Chinese laws.

The President flew back to Manila on Thursday afternoon at the end of his January 3-5 visit to Beijing.

In a joint statement on Thursday, Marcos and Xi announced that their governments had signed 14 agreements, including the establishment of a “direct communication mechanism” between their foreign ministries to prevent “miscommunication and miscalculation” in the event of a maritime dispute.

Both presidents would have access to this hotline that could help avoid “any possible mistakes, misunderstandings that could trigger a bigger problem than what we already have,” Marcos said.

Marcos said the “incidents” at sea involving fishermen and law enforcement authorities resulted from “lack of communication or rapid communication.”

“I want to raise the level of discussion to a ministerial level and with the direct access of both Presidents. The intention of course is to minimize all of these ‘incidents,’” he said. “Definitely when lines of communication are open, President Xi and I could decide faster, and maybe the problems would be lessened.”

The coast guards of the Philippines and China already have such a hotline but it turned out to be ineffective due to the language barrier and China’s insistence of owning nearly the entire South China Sea, an official privy to the matter told the Inquirer.

The two presidents agreed to convene the 4th Joint Coast Guard Committee at an “early date.” An annual defense and security meeting is also being planned.

Will it even be useful?

Some security analysts are wary of the communication hotline established between the two countries.

“The setting up of a hotline is an important development but at this point, it is already just symbolic as the two sides have had mechanisms in place already if emergencies do occur,” said Julio Amador III, president for the Foundation for National Interest.

Singapore-based maritime expert Collin Koh told the Inquirer he was skeptical of a hotline’s usefulness in a crisis.

“During crises, one would expect hotlines to be useful. But if one of the parties decides that not picking up the hotline is a way to signal displeasure, this initiative comes to naught,” he said.

The joint statement said both leaders had an “in-depth” and “candid” exchange of views on the South China Sea and reached a consensus on the “peaceful resolution” of disputes based on international laws.

They reaffirmed commitments to an “early conclusion” of the discussions on the Code of Conduct (COC) in the South China Sea within a “mutually agreed timeline.”

The COC is meant to be a binding agreement between China and the 10-member Association of Southeast Asian Nations on settling conflicting maritime claims in the South China Sea.

In a statement on his return to Manila, Marcos said that Xi assured him that China was willing to import more agricultural products from the Philippines, citing an agreement to lay down the rules and regulations for the export of durian, mangosteen and other Philippine fruits “to help redress the trade imbalance that we now have.”

During his trip, he said the government was able to get $22.8 billion in investment pledges from Chinese businessmen that would support the country’s economic recovery and create more jobs for Filipinos.

He said he invited Xi to a state visit to the Philippines but no date had been set.