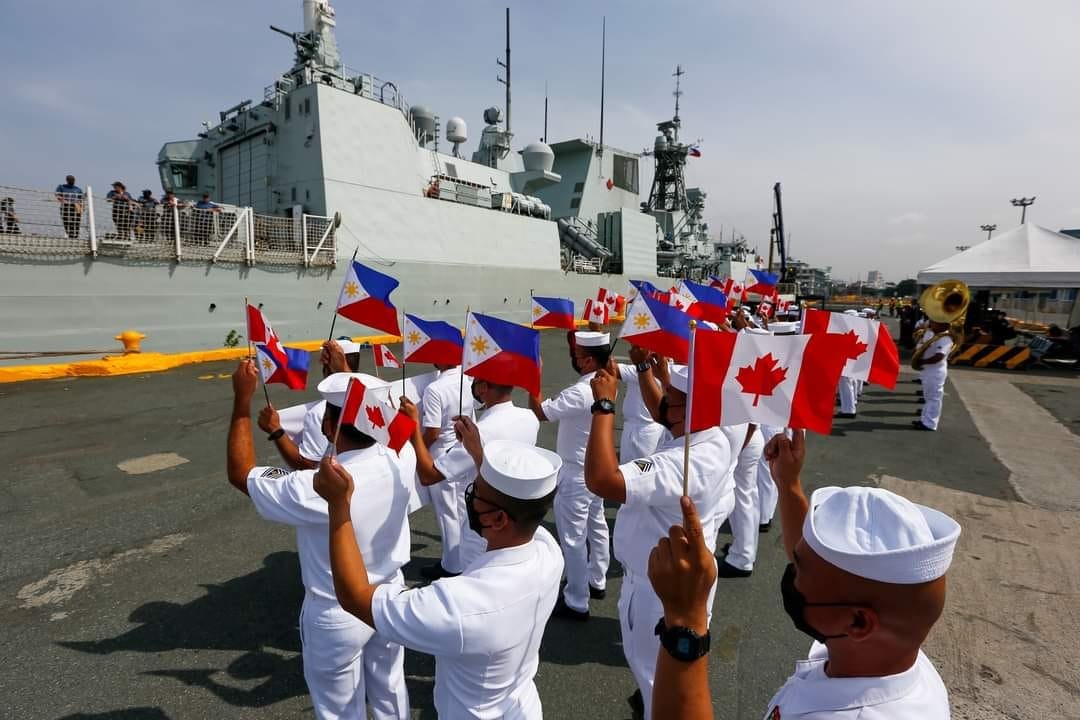 Royal Canadian Navy’s Halifax-class frigate HMCS Vancouver (FFH-131) stops in Manila for a goodwill visit in September 2022 as part of its Indo-Pacific deployment. EMBASSY OF CANADA IN THE PHILIPPINES

MANILA, Philippines—Canada sees warmer relations with the Philippines, including improved defense ties, under the Marcos administration after these were strained when the Canadian government raised concerns over human rights violations in the controversial anti-drug campaign of then-president Rodrigo Duterte.

At a briefing outlining a bigger role in the Indo-Pacific region, the Canadian embassy in Manila, through an official who asked not to be identified in the meantime, said part of Canada’s objective was to normalize relations, including defense cooperation, with the Philippines.

The briefing was held before the presentation of credentials to President Ferdinand “Bongbong” Marcos Jr. by David Hartman, the new Canadian ambassador to the Philippines.

Duterte had reacted furiously at supposed comments made by Trudeau on reports of extrajudicial killings and other human rights violations associated with the former Philippine ruler’s controversial anti-drug campaign.

“It is a personal and official insult,” Duterte had said at a news conference in 2017, referring to supposed comments made by Trudeau when the two leaders met on the sidelines of an ASEAN summit held in the Philippines.

“It angers me when you are a foreigner. You do not know what exactly is happening in this country,” said Duterte then. “You don’t even investigate.”

In 2018, Duterte canceled a P12-billion contract to buy 16 helicopters from Canada in retaliation for what the then-president said was foreign interference when the Canadian government raised concerns that the aircraft would be used in the Philippine government’s counterinsurgency campaign.

In the same year, Duterte ordered the Philippine military not to buy weapons from Canada or the United States “because there is always a condition attached.” Defense ties between Manila and Ottawa have been mostly at a standstill since then.

But at the briefing with Philippine media, the Canadian embassy said Duterte’s successor, Marcos, had shown openness to restoring relations between the two countries to the pre-Duterte level or even boosting these.

The Canadian embassy presented the expanded role that Canada planned in the Indo-Pacific region on the condition that it be attributed only to the embassy and not to any particular official there.

It outlined a 10-year road map in the region of 40 countries that included the Philippines and which currently faces defense challenges posed by China.

According to the embassy briefing, prospects for better relations between Canada and the Philippines were brighter under the Marcos administration. A new memorandum of understanding (MOU) on defense cooperation is finalized. This would allow closer collaboration like training and exercises, the embassy said.

Still, according to the briefing, Canada will seek ways to increase participation in military exercises in the Philippines through “terms of reference” in the MOU that would allow Canadian troops to take part “more fully” in joint drills in the absence of a visiting forces agreement that the Philippines has with the United States.

In recent months, Canada joined major Philippine military exercises as observers, and its navy ships also docked in Manila for port visits. It has been training Philippine navy officers on operating frigates and submarines.

The Philippines and Canada will also pursue maritime dialogue, which the Canadian embassy, at its briefing, described as a new dimension in defense cooperation between the two countries. According to the briefing, Canada is also offering help in strengthening the Philippines’ cybersecurity system.

Under its new Indo-Pacific strategy, Ottawa will allocate 2.3 billion Canadian dollars for security, trade, and investments in the next five years.

The Canadian embassy briefing said this would “play a critical role in shaping Canada’s future over the next half-century.” It described China as a “disruptive global power.”

“China is looking to shape the international order into a more permissive environment for interests and values that increasingly depart from ours,” said the Canadian embassy, through the official who gave the briefing.

“And China’s rise as a global actor is reshaping the strategic outlook of every state in the region, including Canada,” it added.

Canada, a key US ally, will also increase its military presence and partnerships in the region to counter China’s rising influence. It would deploy half of its Pacific naval fleet to the region.

“Canada will increase military engagement and intelligence capacity as a means of mitigating coercive behavior and threats to regional security,” said the Canadian embassy briefing.

It also pledged to work with partners “to push back against any unilateral actions that threaten the status quo in the Taiwan Strait, as well as the East and South China Seas.”