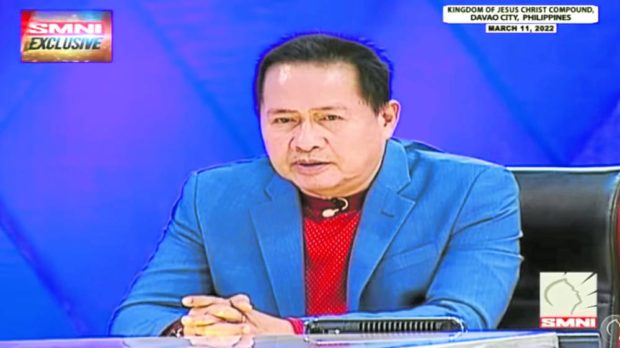 MANILA, Philippines — Lawyers for televangelist Apollo Quiboloy denounced the US Department of the Treasury for punishing him even before his trial on sex trafficking charges has started.

“They’ve already convicted him! He’s never been heard! His human rights have been trampled on!” Quiboloy’s American lawyer Michael Jay Green said in an interview with the religious pastor’s own television network SMNI on a breaking news program on Saturday.

“That’s not the American way,” he added. “It is hard for me to believe this is coming from the United States.”

On Friday (Saturday in Manila) the treasury’s Office of Foreign Assets Control (OFAC) blocked all transactions of Quiboloy, his Kingdom of Jesus Christ (KOJC) religious sect, and other properties within US territory, effectively freezing their assets.

“For more than a decade Apollo Carreon Quiboloy (Quiboloy) engaged in serious human rights abuse, including a pattern of systemic and pervasive rape of girls as young as 11 years old, as well as other physical abuse,” OFAC said in a press statement.

Quiboloy was one of 40 individuals and entities in nine countries sanctioned for corruption and human rights abuse by the US treasury department as it marked International Anti-Corruption Day (Dec. 9) and Human Rights Day (Dec. 10).

“This is good news during Human Rights Day and we hope that other human rights violators would be held to account in the coming days,” said House Deputy Minority Leader and ACT Rep. France Castro.

“We hope that this would serve as a signal to local authorities to also look into the illegal activities of Quiboloy here. There should be no sacred cows,” she said.

The sanctions imposed meant that “all property and interests in property” in the United States “or in the possession or control of US persons are blocked and must be reported to OFAC.”

The action was taken to implement the Global Magnitsky Human Rights Accountability Act of the US through Executive Order No. 13818.

“The United States seeks to impose tangible and significant consequences on those who commit serious human rights abuse or engage in corruption, as well as to protect the financial system of the United States from abuse by these same persons,” OFAC said.

It did not give an estimate of the value of Quiboloy’s US assets. The move followed a US federal grand jury indictment of Quiboloy and his two top officials, Teresita Dandan and Felina Salinas, in November 2021 for conspiracy to engage in sex trafficking by force, fraud and coercion, and sex trafficking of children.

OFAC said Quiboloy’s victims were mostly minors and were required to do scheduled “night duties” which was to have sex with him. The victims were told by the pastor to “offer your body as a living sacrifice,” it said.

“Quiboloy exploited his role within KOJC to rape his victims and subject them to other physical abuse, describing these acts as sacrifices required by the Bible and by God for the victims’ salvation,” OFAC said.

On Jan. 31 this year, the US Federal Bureau of Investigation published a poster declaring Quiboloy as one of the most wanted suspected sex traffickers in America. The US-based lawyers for Quiboloy on Saturday said that his US trial was to start only in 2024 and that the accusations against him were bogus and politically motivated by the US “liberal administration” that saw him and his sect as a “threat.”

Green denied all of the allegations against his client, saying such would be unbecoming of a pastor who helped the poor.

Asked if he had proof to counter the claims of the alleged victims, he said emphatically: “I didn’t find any victims because there were no victims!”

Another lawyer for Quiboloy, Manny Medrano, said that as long as there was no trial, “that paper (federal indictment) is worthless.”

“No one had their day in court (yet),” he pointed out.

“There’s a lot to be done between now and then and the pastor has a real fire power legal team to assist him and defend him aggressively,” Medrano said.

According to Green, if Quiboloy were to face trial in the United States, he would surely be held in jail for years without bail, so they would represent him instead. Quiboloy’s lawyers also said they were confident that his business transactions in the United States would remain untouched despite the sanction.

Medrano said KOJC, which claims 7 million members worldwide, was “not losing sleep” over the recent pronouncements from US authorities. In a statement after the FBI poster was published, Quiboloy, who claims to be “the appointed son of God,” branded all accusations against him as lies instigated by the “Devil.”

In January 2020, US federal agents arrested three of his church leaders on immigration fraud charges following a raid on its US headquarters in Los Angeles City.

Workers allegedly solicited donations year-round for the church’s charity and were beaten and psychologically abused when they did not reach their daily quotas. The money raised, originally for the benefit of poor children, allegedly went to church operations and the “lavish” lifestyle of Quiboloy.

Around $20 million was sent back to the church in the Philippines from 2014 to the middle of 2019, according to federal investigators.

In 2018, Salinas, leader of the church’s Hawaii branch, was arrested for smuggling cash onto a private plane in Honolulu bound for the Philippines with Quiboloy on board. A witness saw Salinas and Quiboloy order church members to smuggle hundreds of thousands of dollars inside black socks packed in suitcases from California to the Philippines in 2013 and 2014.

The chief state counsel of the Philippine Department of Justice (DOJ) has said that if a request came, the DOJ could work on the possible extradition of Quiboloy, but it could take years due to the various processes that it would have to undergo.

In this year’s presidential election, he endorsed the winning tandem of President Ferdinand Marcos Jr. and Vice President Sara Duterte.

Duterte ally Apollo Quiboloy indicted for sex trafficking in US