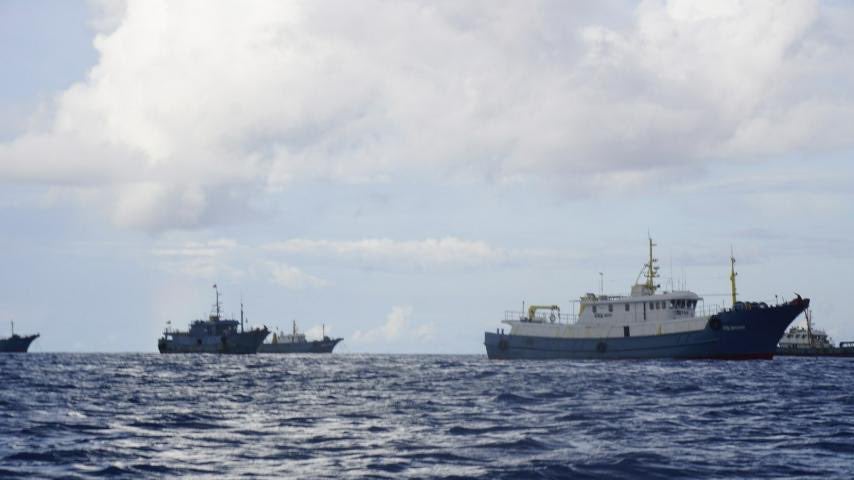 Several ships believed to be Chinese maritime militia were spotted by fishermen in Iroquois Reef in the West Philippine Sea in this photo taken in September. The military said an average of 25 vessels have been monitored there from September to December based on their patrols. CONTRIBUTED PHOTO

Dozens of Chinese vessels believed to be manned by their maritime militias in the West Philippine Sea have been moving much closer to Palawan in recent months, including waters near the sites of an aborted Philippines-China joint energy exploration plan, a top military official said on Tuesday.

“I confirm the swarming presence of Chinese fishing vessels in Iroquois Reef and Sabina Shoal since early this year,” Western Command chief Vice Adm. Alberto Carlos, the most senior military officer who watches over the Kalayaan Island Group in the West Philippine Sea, told the Inquirer.

The vessels, ostensibly for fishing, have remained in these waters despite diplomatic protests against their presence, Carlos said.

“Through continuing diplomacy and dialogue, we hope for these vessels to leave our exclusive economic zone (EEZ) soon,” he said.

Carlos made the remarks when asked by the Inquirer to comment on a report last month by the Asia Maritime Transparency Initiative (Amti) which said that Chinese vessels had spread out across “militia hot spots,” including Iroquois Reef, from September 2021 through September 2022.

Iroquois Reef is located 237 kilometers from Palawan’s Rizal town, and 148 km southwest of Recto (Reed) Bank, an area believed to be rich in oil and gas where China wants to conduct a joint exploration with the Philippines within the country’s 370-km EEZ.

President Marcos recently said the government was looking for other ways to explore resources as the maritime dispute with Beijing had become a “roadblock.” The government firmly asserts that any joint energy exploration must comply with Philippine laws. (See related story on this page.)

Satellite images reviewed by Amti showed that Chinese ships had constant presence at Iroquois Reef throughout the 12-month period ending in September 2022—ranging from two to almost 30 vessels.

Most militia vessels have established a “pattern” of heading home for the holidays from December to early February, Amti said.

Carlos said an average of 25 ships were monitored at Iroquois Reef from September to December this year.

At Sabina Shoal, 135 km from Palawan, there was an average of 20 vessels during the same period. Chinese ships used to have occasional presence at the shoal and in smaller numbers.

Philippine Coast Guard ships have been challenging the Chinese militia vessels but they get no response, according to Carlos. “Said challenges have been the basis of diplomatic protests,” he said.

The Department of Foreign Affairs said 172 diplomatic protests had been filed against China as of Aug. 31 this year and 388 during the Duterte administration. They were over illegal fishing, illegal presence of Chinese vessels, harassment of fishermen and enforcement agencies, and unauthorized marine scientific research.

Chinese militia vessels pose as fishing boats but are usually deployed with the China Coast Guard (CCG) to enforce Beijing’s territorial claims in the South China Sea, including the West Philippine Sea.

A fisherman from Palawan, who wanted to be identified only as Mark, and his companions said they saw some 30 Chinese vessels at Iroquois Reef during their 10-day trip to the West Philippine Sea in late September.

“They just loitered there and they did not seem to be fishing,” he told the Inquirer.

Both Iroquois Reef and Sabina Shoal are much closer to Palawan than Julian Felipe (Whitsun) Reef, where the Philippine government has repeatedly protested the presence of massive Chinese militia fleet since 2021. At one point, as many as 220 Chinese militia vessels were anchored at Julian Felipe, about 324 km west of Palawan.

Amti said recent satellite images showed over 80 militia ships at the reef and “the patterns observed will continue for the foreseeable future.”

—WITH A REPORT FROM INQUIRER RESEARCH INQ