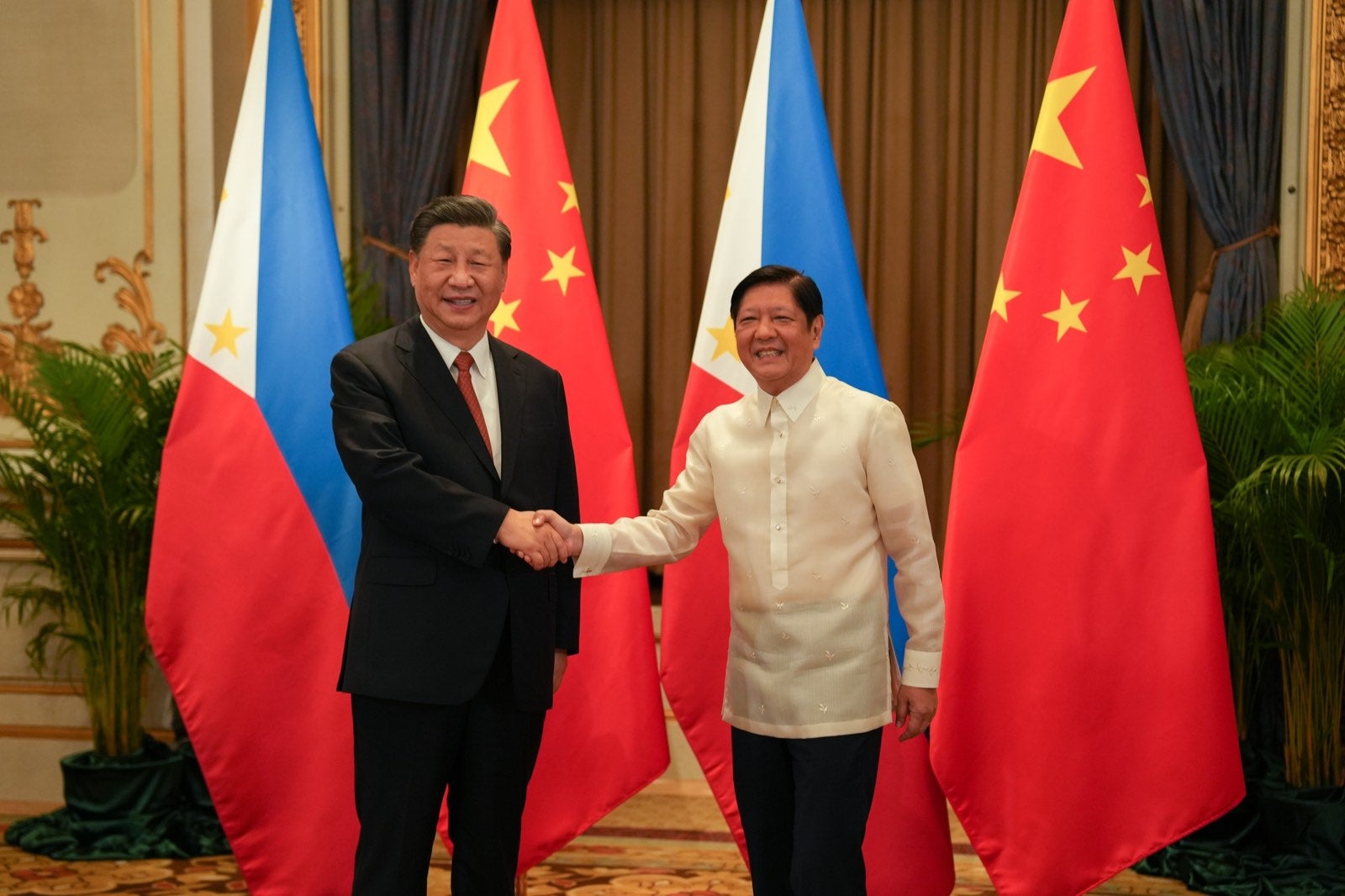 FIRST BILATERAL TALKS Easily a highlight of President Marcos’ attendance at this year’s Asia-Pacifific Economic Cooperation (Apec) summit in Bangkok is his meeting with Chinese President Xi Jinping on Thursday night. The Palace has yet to say if the South China Sea dispute was discussed. Photo courtesy of Office of the Press Secretary

BANGKOK—President Ferdinand Marcos Jr. and Chinese President Xi Jinping had their first bilateral meeting here on Thursday, but Malacañang did not say if the Philippine leader raised the controversial issue on the South China Sea.

Mr. Marcos met Xi at the Mandarin Hotel on the sidelines of the 29th Asia-Pacific Economic Cooperation (Apec) leaders’ meeting before heading to the gala dinner for the visiting dignitaries.

“It’s the first time that I’ve met President Xi Jinping and I was very happy that we were able to have this opportunity here in the Apec meeting in Bangkok to have a bilateral meeting,” the Office of the Press Secretary, quoting Mr. Marcos, said on Thursday night.

“The bilateral meetings are really just a kind of getting-to-know-you and that was the same with our meeting,” Mr. Marcos said.

In a press statement, Undersecretary Cheloy Garafil, officer in charge of the Office of the Press Secretary, said Mr. Marcos and Xi discussed regional issues and the President’s plans for his upcoming state visit to China in the first week of January.

The statement made no mention of whether or not the South China Sea dispute was raised during the meeting.

Mr. Marcos earlier told reporters “it’s impossible for me to talk to China without mentioning that,” referring to the issue in the West Philippine Sea.

“Whatever details that need to be discussed between the Philippines and China will be taken up during his visit,” Garafil said, referring to Marcos’ state visit to China on Jan. 3 to 6 next year.

Mr. Marcos described his meeting with Xi as “a very pleasant exchange.”

“And they had a few minutes of recollecting the meetings that they have had, which I think helped the tone of the meeting. So I am looking forward to January and the state visit to China,” Mr. Marcos said, referring to Arroyo and Xi.

The talks came less than a week since Mr. Marcos urged his fellow leaders during a speech at the Association of Southeast Asian Nations (Asean) summit to “ensure that the South China Sea remains a sea of peace, a sea of security and stability, and of prosperity.”

The Philippines and China are locked in a long-standing maritime dispute as Beijing has repeatedly refused to recognize the 2016 Hague ruling that invalidated its sweeping claims in the disputed waterway.

Mr. Marcos has pushed for the completion of the code of conduct in the South China Sea as tensions continue between claimant nations in the resource-rich waterway.

Speaking to reporters before the bilateral meeting, Romualdez said: “We are very confident that this first meeting will be a warm meeting because they (China) are our partners in progress and prosperity.”

Romualdez said Arroyo’s presence at the summit and the meeting “is definitely an asset,” noting that “you not only have a president but also a former president who is also an economist.”

“Her reputation, her track record needs no introduction to anyone. Her advice to President Marcos is invaluable,” the Speaker said.

Earlier in the day, President Marcos called on the 21 member economies of Apec to invest in pandemic resilience as the world could no longer afford to impose new lockdowns and travel restrictions.

Speaking before his fellow leaders and business executives here, the President said countries around the world must continue to reinforce global health systems, not only against new and emerging variants of COVID-19, but also against other infectious diseases that might emerge.

“The global economy simply cannot afford another crippling series of lockdowns and travel bans that deflate consumer confidence, dampen the recovery of tourism, and derail the stability of global markets,” he said in his 12-minute prepared speech.

“Governments must continue to invest in pandemic preparedness and in ensuring the resilience of the global health system,” he told leaders and business officials here, which included Arroyo, who was present at the summit upon the invitation of Mr. Marcos.

He said adopting the One Health approach, a framework designed by the World Health Organization “to achieve better public health outcomes,” and strengthening health surveillance systems for emerging and reemerging infectious diseases, from the human-animal-environment interface, could be part of the solution to mitigate future pandemic.

In the Philippines, he said Filipinos were still grappling with the effect of the pandemic, prompting the government to continue providing direct cash assistance to poor Filipinos.

“It is actually at this point, it is survival for many of our people simply because prices of fuel, prices of food have risen to such an extent that they simply cannot afford to survive without assistance from the government,” he pointed out.

“This is not something that we prefer to do. I don’t think that anyone is particularly enamored with direct cash transfer payments. But it is the only way that we can mitigate the situation that our people have,” he added.

“So that is something that we are hoping with the creation of jobs and with the growth of the economy to slowly begin to dial down,” he further said.

Aside from the COVID-19 pandemic, Mr. Marcos also raised the need to address food security and climate change.

The President said food security was “a serious global problem” felt by everyone in the world.

“The issues that the world faces now—from climate change, to inflation, to war—are viewed by the ordinary Filipino through the lens of food security,” he said.

He pointed out that the decline in agricultural output and productivity could be linked to climate change, which has made extreme weather conditions such as unpredictable typhoons and severe droughts “more frequent and more deadly.”

He said food security must be a top priority for all governments, citing that the conflict between two of the world’s biggest agricultural producers “has led to a scarcity of grains and fertilizers felt painfully across the globe.”

Mr. Marcos also highlighted climate change, which he said was “the most pressing existential challenge of our time.”