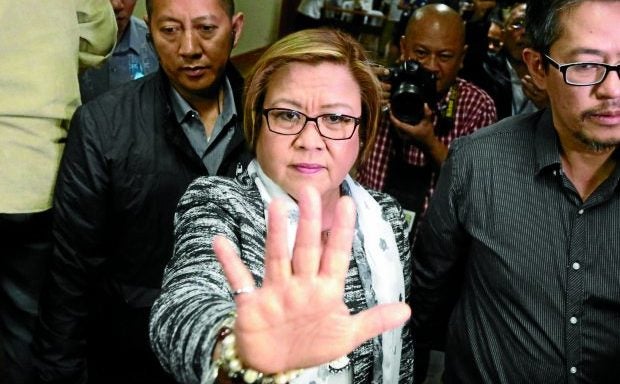 MANILA, Philippines — United States lawmakers have renewed their call for the administration of President Ferdinand “Bongbong” Marcos Jr. to drop all charges against detained former Senator Leila De Lima as they expressed “deep concern” over her “continued unjust imprisonment.”

In a letter to Justice Secretary Jesus Crispin “Boying Remulla” dated October 12, six US lawmakers cited the foiled attempt to hold De Lima hostage last Sunday, October 9 which, they said, further highlights the need for the Marcos administration to revisit the former senator’s case “rather than simply transfer her to another detention site.”

READ: Hostage-taker ‘determined to die and to take me with him’ – De Lima

“By reviewing Senator De Lima’s case, dropping the charges against her, and bringing those responsible for her unjust detention to account, you and President Marcos Jr. can turn the page on [former] President Duterte’s abuses and demonstrate your commitment to the rule of law in the Philippines,” they said.

The lawmakers – US Senators Edward Markey, Richard Durbin, and Patrick Leahy, and Congress members Aumua Amata Radewagen, Alan Lowenthal, and Donald Beyer Jr. – also called for the conduct of an “independent and impartial investigation into the circumstances that led members of the Philippine National Police (PNP) and other witnesses to make false claims against Senator De Lima.”

This probe, according to them, should similarly include “identifying any members of the Duterte administration who may have been involved, and to hold those individuals to account.”

While they said the ongoing case against De Lima is “especially troubling,” they remained hopeful that the Marcos administration will steer the case in a different direction, citing separate August meetings of a Markey-led US congressional delegation in the country with both the President and De Lima.

“We were – and are – optimistic that developments such as these signal a shift under President Marcos Jr.’s leadership away from the types of human rights abuses – including a violent and ineffective ‘war against drugs’ – directed and carried out under former President Rodrigo Duterte,” they noted.

The US lawmakers further sought Remulla to continue working with the United Nations Office of the High Commissioner for Human Rights to enact recommendations and address concerns regarding its report on the country last September.

They likewise pushed for the Philippines’ Interagency Review Panel to “accelerate its review of killings related to the Duterte government’s anti-drug operations.”

The US legislators then noted that the Department of Justice (DOJ), led by Remulla, “should take appropriate action based on the findings, including through internal administrative and criminal processes, and provide redress for victims.”

“Finally, we urge the passage of [a] proposed legislation that protects human defenders,” they added.

Marcos has already aired his belief that using his legal hand as the country’s chief executive in De Lima’s case would be “interfering.”

Prior to this, De Lima asserted that she “will not and will never ask [Marcos] to interfere with the courts.”

“This is my earnest and most respectful plea to you, your Excellency: Order DOJ to stop blocking the testimony of the recanting prosecution witness Rafael Ragos, and for them to stop presenting obviously perjured witnesses like Herbert Colanggo,” she said in a series of tweets on Thursday.

READ: DOJ blocks own witness who has cleared De Lima

De Lima added: “You can reverse the grievous wrongs inflicted on me by your predecessor. Please, Mr. President. Salamat po (Thank you).”

De Lima, a fierce critic of the Duterte administration, has been detained at the PNP Camp Crame Custodial Center since 2017 over what she has repeatedly branded as “trumped-up” drug-related charges.