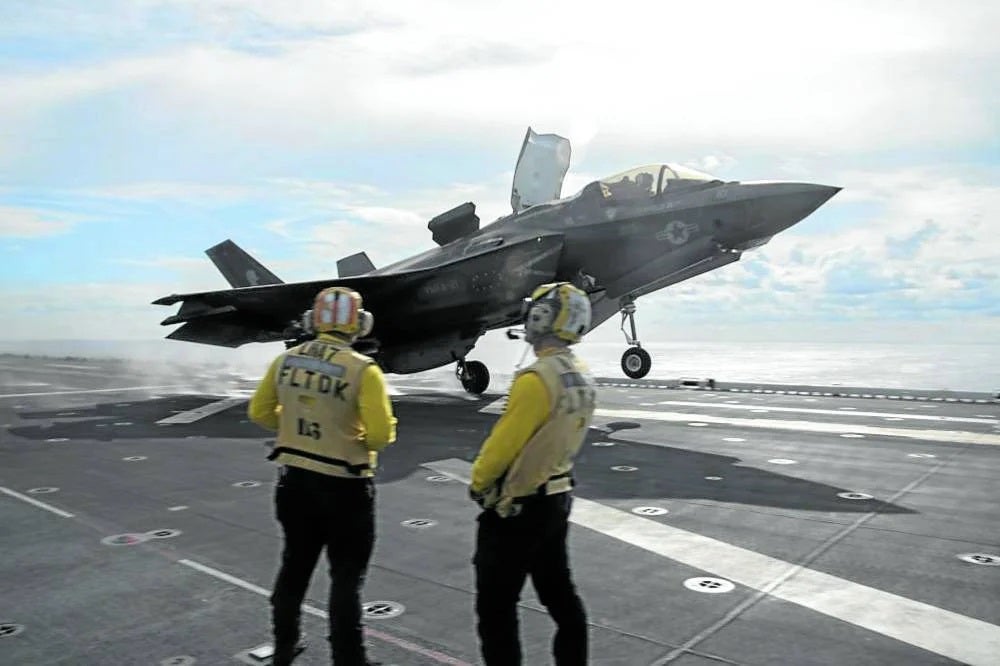 VENOM AT SEA An F-35B fighter takes off the US assault carrier Tripoli somewhere off northern Luzon on Oct. 9 as part of the Kamandag (Venom) military exercise between the Philippines and the United States. —US NAVY PHOTO

For the first time, the United States deployed the world’s most advanced fighter jet in tandem with its advanced long-range rocket systems in live-fire drills with the Philippines as part of the Kamandag (Venom, in Filipino) military exercises in several parts of Luzon which analysts saw as a preparation for a potential conflict in Taiwan and South China Sea.

At least five F-35B fighters were sent with the assault carrier Tripoli to waters off Luzon for the 10-day exercise, which ends Oct. 14.

The United States also deployed batteries of the High Mobility Artillery Rocket System, which the United States has supplied Ukraine in its war with Russia, for a live-fire exercise at the Crow Valley firing range in Tarlac on Thursday.

Around 3,500 Filipino and American troops are involved in Kamandag—1,057 from the Philippines and 2,553 from the United States. Thirty personnel from Japan and another 120 from South Korea joined as observers.

The activities were held in provinces facing the West Philippine Sea and Luzon Strait near Taiwan, such as Batanes, Cagayan, Zambales and Palawan.

Philippine military officials said Kamandag is an annual exercise which is on its sixth year and had nothing to do with the situation in East Asia, particularly Taiwan.

“This year’s Kamandag was conceptualized last year. It is not dependent on what the regional situation is… in terms of the bilateral work plan last year,” acting Navy chief Rear Adm. Caesar Bernard Valencia said during the opening ceremony last Oct. 3.

But security analysts surmised that the use of the weapons in a military exercise with the Philippines was likely aimed at readiness for any conflict that may arise in the region.

The deployment of the F-35Bs was “a significant development though not that unexpected,” Singapore-based maritime security expert Collin Koh from the S. Rajaratnam School of International Studies told the Inquirer.

“Over the years we see the gradual stepping up on the scope and complexity of PH-US military exercises, Balikatan being a prime example—especially notable being the introduction of more capable systems into the exercise mix,” he said.

“The real-life situation we can envisage in this exercise through the deployment of such assets would almost undeniably be aimed at flashpoints in the South China Sea and Taiwan in particular,” Koh pointed out, given the locations of the drills.

Kamandag is being held simultaneously with Resolute Dragon 22, a Japan-US exercise involving 5,500 personnel in Hokkaido, Japan.

“The US Marines appear to be field testing new operational concepts… in which small units operate forward in a contested environment within the First Island Chain, integrating long-range fires and the networked-sensor capabilities of the F-35B, as well as a traditional platform for close air support,” Euan Graham of the International Institute for Strategic Studies, told the Inquirer.

The ongoing drills and the use of F-35Bs demonstrate that “the Philippines is an important ‘in situ’ military training location for the United States, given its proximity to the South China Sea and Taiwan,” he said.

The participation of Japan and South Korea also suggests that the drills are designed to emphasize “the networked potential of Washington’s Pacific alliances, as a deterrent signal to China,” he said.

Peter Mumford, a Southeast Asia analyst from Eurasia Group, said Manila and Washington are intensifying military cooperation. “This is partly driven by growing recognition in both capitals of the potential role the Philippines may play if there is a conflict between the United States and China over Taiwan. The Philippines’ close geographic proximity to the island makes it strategically important in this scenario,” he said.