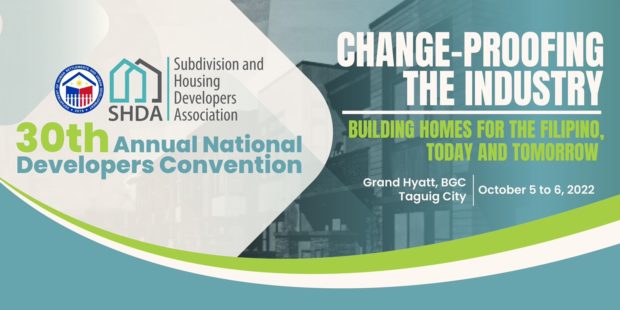 Department of Human Settlements and Urban Development (DHSUD) Secretary Jose Acuzar is set to discuss the details of the Marcos administration’s plans for the housing industry on the first day of the 30th National Developers Convention, October 5, at the Grand Hyatt Manila, Taguig City.

In his keynote speech, Housing Secretary Acuzar will introduce the ‘Pambansang Pabahay Para sa Pilipino Program,’ a directive from President Ferdinand Marcos Jr. that aims to construct a projected one million houses per year in select areas in the country to address the 6.5 million housing backlogs and the two major bottlenecks of affordability and access to funds for housing.

The two-day convention, annually organized by the Subdivision and Housing Developers Association (SHDA), in partnership with the DHSUD, is expected to gather more than 300 housing sector stakeholders who will be key players in the new administration’s ambitious, affordable and inclusive national housing program.

“This will mean huge things for housing developers and new areas of synergy between the private sector, the national government, local government units, and local communities,” said SHDA President May Rodriguez, expressing full support for the program.

Through the housing program, partner LGUs may also provide flexible financing options alongside a preferential interest rate of only 1% to make the units affordable to low-income beneficiaries.

Aside from Secretary Acuzar, second-generation property developers are expected to deliver their resource speeches to inspire the audience to modernize the way they do their businesses.

Soberano, Ng, and Guevarra have all been pivotal in their respective companies’ explosive growth. In the plenary session “From Good to Great: Insights from Real Estate Developers that Made the Leap,” they will recount these growth stories and the factors that allowed them to break through to their current level of success.

Meanwhile, in “Building the Urban Center of the Future,” Lagdameo, Antonio, and Laurel will discuss their visions for inclusive, sustainable urban centers and share the qualities of the urban centers that each built.

The six real estate leaders, who are all new movers and shakers in today’s Philippine property market, are poised to share their best practices, success stories, and fresh perspectives as private sector developers. They will also share their experience in working hand in hand with the government with vital insights on the mode of intervention, planning and implementation, and innovations for sustainable housing communities, among others.

Considered as the country’s largest platform for the housing community, the National Developers Convention 2022 will be held from October 5 to 6 at the Grand Hyatt Manila in Taguig City. Later on, SHDA will hold the seventh Housing Expo from October 7 to 9 at the Megatrade Hall 1, Megamall B, Mandaluyong City, to feature an extensive selection of property offerings, construction supplies, and housing and financial services for home buyers and owners.