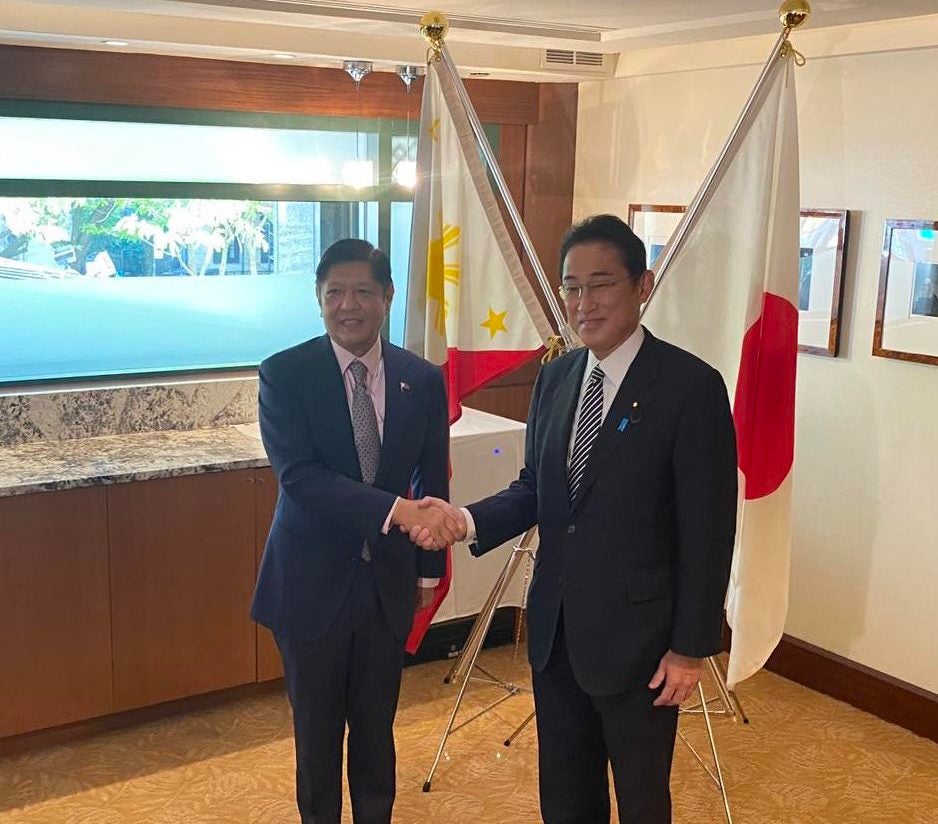 NEW YORK CITY — On the fourth day of his six-day US visit, President Marcos held his first bilateral talks with Japanese Prime Minister Fumio Kishida on the sidelines of the 77th session of the annual United Nations General Assembly (UNGA) here.

Kishida hosted lunch for Marcos and Philippine officials at the hotel where the Japanese leader was staying while in New York.

With the Philippine and Japanese flags in their background, the two leaders warmly greeted each other and shook hands before heading to the talks.

The two leaders reaffirmed their commitment to reinforce ties and strengthen cooperation, discussing how the two nations saw growth and deepened cooperation in addressing their security and defense priorities, according to the Philippine statement issued through the Malacañang Office of the Press Secretary.

Quoting the President, Press Secretary Trixie Cruz Angeles said Marcos noted that 66 years since the normalization of bilateral ties, the Philippines and Japan “have fostered one of the closest partnerships in the region.”

Marcos and Kishida expressed confidence that bilateral cooperation in the coming years “will lead to the further realization of the two countries’ common aspiration for regional peace and stability, and a better life for their peoples,” Angeles said.

Kishida also said in the meeting that “the international community needs to oppose unilateral attempts to change the status quo by force in the East and South China Sea, as well as economic coercion,” the spokesperson said in apparent reference to Chinese activity regularly criticized by Japan and other countries with overlapping claims in the disputed waters.

Japan said after Marcos was elected last May that it wanted to continue cooperation in infrastructure development, including railways, the Subic Bay development, as well as in security and coast guard law enforcement.

The Asian economic powerhouse is a major economic partner of the Philippines, with both countries enjoying strong trade and investment relations because of the Japan-Philippines Economic Partnership Agreement (JPEPA) signed in 2006.

The Philippine leader is also set to hold his first bilateral talks with US President Joe Biden on Thursday 11 a.m. (11 p.m. Thursday in Manila).

Marcos is expected to discuss with Biden issues on trade, investment and strengthening ties with its traditional ally.

In an earlier speech before the Filipino community in New Jersey, Mr. Marcos said he was hoping to meet Biden as part of the Philippines’ efforts to talk to and forge partnerships with other countries so the country could recover from the damaging effects of the COVID-19 pandemic.

The President described the Philippines’ relations with the United States, its traditional ally, as “strong,” adding: “I believe we will make them stronger in the coming years.”

A planned meeting with European Union Council President Charles Michel did not push through.

With First Lady Liza Araneta-Marcos joining the Philippine side, Marcos and Blair, who is the executive chair of the Tony Blair Institute For Global Change, tackled the peace process in the Bangsamoro Autonomous Region of Muslim Mindanao (BARMM), food security, climate action and trade issues, according to the President’s Facebook page. 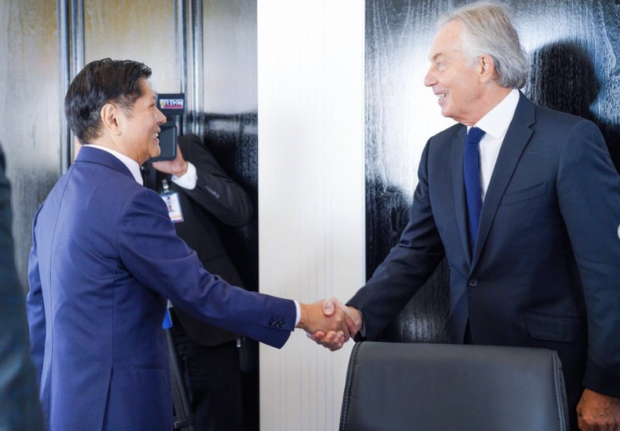 Blair was prime minister of the United Kingdom from 1997 to 2007. He and former US President George W. Bush orchestrated the multinational attack on Iraq in 2003 for so-called “weapons of mass destruction” that were eventually admitted to be nonexistent.

Malacañang has yet to provide details about the President’s meeting with Malpass, whose agency is a major multilateral lender to the Philippines.

The Marcos administration is borrowing $2.14 billion from the World Bank for various development projects, including $300 million for a digital transformation program.

The day before, after his speech before the UNGA on Tuesday afternoon (predawn Wednesday in Manila), Marcos had a dialogue with the US-Asean Business Council and the US Chamber of Commerce at the five-star St. Regis Hotel.

“Let us find new ways to partner, to develop, to strengthen this relationship between the US, Asean (Association of Southeast Asian Nations) and the Philippines and in that way the synergies we will find in that kind of relationship will be to the benefit of us all,” the President told the audience based on a short video clip released through the Radio Television Malacañang (RTVM) Facebook account.

The US-Asean Business Council is the lead advocacy group for US businesses operating within the 10-nation bloc, while the US Chamber of Commerce is the world’s biggest business organization representing more than three million companies and organizations.

“Again, like I said, there’s a lot of moving parts in these meetings in the UN. There are over a hundred who want to meet each other,” he added.

The President will depart for Manila on Saturday.