Professional Filipinas have a voice in the Gulf | Global News

Professional Filipinas have a voice in the Gulf 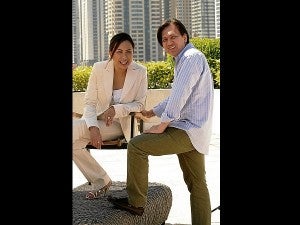 LALAINE and Mon Benitez are among many rising young Filipino professionals in the Gulf.

DUBAI—There are only a few women who have the courage to speak out and be a catalyst for change here. One of them is Lalaine Chu–Benitez, the voice of the empowered Filipina in the United Arab Emirates (UAE).

Lalaine, a marketing communications professional, is the publisher of the Dubai-based Illustrado Magazine, a glossy lifestyle magazine which aims to uplift the morale and the image of Filipinos in the Gulf.

The magazine, says Lalaine, was the result of her many struggles to combat stereotypes of the Filipino woman as limited to domestic or low level service work.

Lalaine now has over 16 years experience as a multinational marketing executive, handling prestigious brands in the lifestyle and consumer health categories in over nine countries in the Middle East. She also makes the rounds as a conference speaker as a recognized expert in her field.

She moved to Dubai in the early 1990s as a new graduate of the University of the Philippines in Diliman. Her father, an engineer, had relocated to Dubai after 10 years in Saudi Arabia. “The early ’90s wasn’t the best time for Filipinos working in the region, Lalaine recounts. We were mostly slotted into very specific job categories—either nurses, petroleum industry employees, domestic helpers, sales ladies or hotel service crew. Except for those in the petroleum industry, Filipinos in senior positions were a rarity.”

The first job offered to her was a position as sales lady at the Dubai Duty Free. Back then it was considered a prime employment opportunity for Filipinos.

But Lalaine, an activist during her student days at UP, was not one to give in to discrimination and stereotyping. She was full of high flying dreams and ambitions.

Her first career break was a job as Guest and Public Relations Executive Trainee at the prestigious Jumeirah Beach Hotel. This helped her get her first regular job at the SMH (Société Suisse de Microelectronique et d’Horlogerie) Middle East—the regional branch of the holding company for name watch brands such as Swatch, Omega, Rado, Longines and Tissot, among others—where she worked for seven years.

Lalaine recalls: “I started there as a PR Coordinator and  worked my way up, expanding my role into marketing until I became a Brand Manager… I was lucky to have had a mentor who gave me enough space to grow.  From writing press releases, she went into strategic marketing, project management, and sales and merchandising training.

As luck would have it as well, Lalaine met her future husband on the job. He was the Art Director of Leo Burnett, the ad agency servicing Swatch—another Pinoy expat, Mon Benitez.

Having honed his skills with the ad agency Lintas in Manila, Mon moved to Dubai to join Leo Burnett in 1992. He is currently its creative

Mon is also making his mark in the UAE. He and his creative team have won for their agency 10 gold awards and four silver awards from the International Advertising Association (IAA) UAE chapter. Some of the agency’s ad campaigns for global release are created in Mon’s department.

For Lalaine and Mon, everything just fell into place. They were married soon after they met.

Lalaine shifted to the healthcare industry. She ended her six year stint there as Novartis Consumer Health’s Head of Marketing for the Gulf Region with a secondary role as Business Development Manager for Lebanon, Jordan, Syria and Palestine.

She says the main challenge for her when she was starting out was to prove that she had the confidence and social skills to be in a high profile job.

Lalaine shares: “I have experienced stereotyping and discrimination at different levels.  Among them, I distinctly remember being told by one of my colleagues, when I was still very new in Dubai, that I was getting paid less than my Caucasian colleagues because “Filipinos have a poor economy and so we need less money.”

Years ago, while presenting the magazine to an Arab advertiser  stressing the economic importance of the Filipino community in the region, the client asked: “But aren’t Filipinos mostly laborers and maids?”

But Lalaine points out that through the years, Filipinos have progressed in the Gulf and there are now a considerable number of Filipinos holding management positions in the UAE.

“They are now a significant market,” states Lalaine.

In order to succeed, Lalaine knew she had to be an expert in her field. She took up postgraduate marketing studies. She improved her public speaking skills through self-study. She gained confidence by interacting more with people.

The corporate world is very competitive in this region. “In Dubai, where there are so many different nationalities, many more aggressive than the typical humble and self-deprecating Filipino, it is easy to get “eaten alive” by colleagues who will try to step on you through their ruthless work-style or by politicking.”

“The biggest change I had to do, was to really amp up my aggressiveness to make sure that I was heard, and for them to understand that I meant business.

Her work required her to travel to many places. “I used to travel at least 12 times in a year and I did that incessantly for seven years,”

On her last year in Novartis, her promotion depended on her acceptance of a position in  the company’s Switzerland headquarters. She was torn: it was a great career opportunity but at the same time, one that demanded a big a sacrifice from her family “I couldn’t ask my husband, who also had a great career, to move to a different country, but I also could not accept living away from my family for work,” she recounts.

The birth of ‘Illustrado’

As a conference organizer and speaker, Lalaine could not help but notice how surprised her audiences were when a Filipino like her stepped up to the rostrum.  “Things would change when they hear me speak, you can see their expression change from disbelief to respect.  That, among other experiences, made me realize, how little foreigners understand how good, educated and capable Filipinos are.”

One memorable event for her was when she noticed Filipino service staffers cheering proudly when they realized that a Filipina was the  main speaker at a conference; some even fetched their managers just to point her out. This experience taught her that other successful Filipinos can inspire and give a sense of pride to their compatriots.

So Illustrado magazine was born. Their challenge was to create awareness of the commercial importance of the Filipino expat community and to deliver an international quality glossy that would gain respect from the professional community—but with a distinctive Filipino touch.

Illustrado’s main advocacy, according to Lalaine, is to uplift the Filipino’s morale and image by celebrating our achievements and providing empowered role models in the Middle East.

Among their noteworthy projects are the “Women of Substance” issues, which honor accomplished Filipino women from different walks of life. They also have produced inspiring and educational women’s documentaries, as well as the “Pinays Take Charge” materials which are making the rounds in the Filipino community.

“Loving what you do and unusual longevity in a company will get you somewhere,” says Lalaine, when asked to advise aspiring overseas professionals. But she adds: You can’t always get ahead just on intelligence, creativity, hard work and commitment. “It pays to be assertive and make sure people understand that you are not a “doormat,” she adds.

Filipinos need to be more aggressive, she says. Take it from a marketing expert: “We should always project ourselves as equals, never inferior or less—confident, professional and aware of the value we bring.”