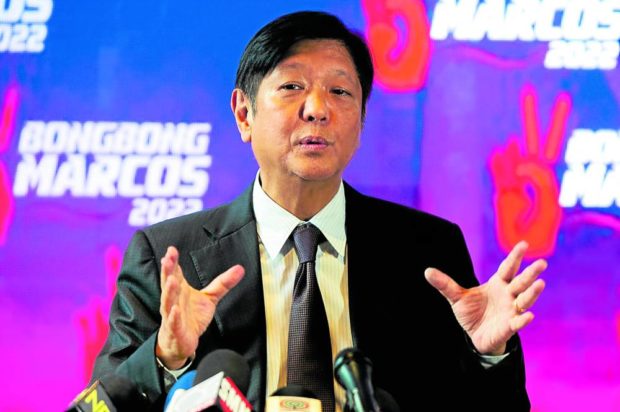 NATIONAL UNIVERSITY OF SINGAPORE, Singapore — More jobs in the allied healthcare industry await Filipinos here in Singapore, President Ferdinand Marcos Jr. said during his meeting with the Filipino community in the city-state on Tuesday night.

Marcos made the announcement during his speech before Filipinos at the National University of Singapore (NUS).

He then called Migrant Workers Secretary Susan Ople to join him on stage to talk more about jobs.

“The good news is it’s the government of Singapore that is reaching out to us. They’re asking for additional Filipino health workers because they were impressed,” Ople said in Filipino. “So tomorrow we will sign a joint communique with the Ministry of Health. It’s stated there they want to hire Filipino health workers.”

The crowd that filled up the NUS Auditorium welcomed the announcement.

“That’s how they look up to you,” Marcos said in Filipino. “Singapore is looking for thousands [of workers] — not only nurses but also aviation [workers], engineers, professors — everything.”

“If the jobs in the Philippines are already complete, we still have the opportunity to show how good our overseas workers are,” he added.

Marcos arrived in Singapore on Tuesday for the second leg of his first round of state visits, where he is expected to meet the city-state’s leaders and members of the business sector on Wednesday.

The plane carrying Marcos and his delegation landed at exactly 12:45 p.m., according to the Office of the Press Secretary (OPS).

It is unclear how agreements Marcos would sign with Singaporean officials. But two deliverables are being envisioned, Ambassador Teresita Daza, who is also the spokesperson of the Department of Foreign Affairs (DFA), said in the pre-departure briefing last Friday.

The first deliverable, she said, is the agreement regarding the Philippines’ fielding of a team to the Counterterrorism Information Facility (CTIF). The second is a memorandum of understanding (MOU) on data privacy and protection cooperation.

Bongbong Marcos to go on state visits to Indonesia, Singapore; US visit being ‘worked out’

Marcos to meet with Filipino communities in Indonesia, Singapore during state visits