Calaca powers up for cityhood

Calaca powers up for cityhood

On September 03, 2022, Calaca, Batangas braces for cityhood as it holds a plebiscite that will determine its future and bring another milestone in its history. By virtue of COMELEC Resolution No.10799, the plebiscite will be conducted to ratify the conversion of the Municipality of Calaca into a component city to be known as the City of Calaca.

“It is our honor and privilege to finally come to this stage and decide together as a people with shared dreams and aspirations,” Mayor Sofronio “Nas” Ona, Jr., proponent for the YES vote, shared. “This is a testament to the determination and hard work of Calaqueños in realizing our dreams for future generations to come”, he adds.

Calaca, known in the country as the Power Town in South Luzon, is set to become the fifth city in the province of Batangas. Local officials affirm that Calaca is more than ready to become a full-fledged city and is now on full throttle in its information education drive to ensure that the benefits of becoming a city would reach every Calaqueño.

“The Municipality of Calaca has met the requirements under the Local Government Code as amended to entitle it to cityhood. It had a locally generated annual income of P106,089,000.00 in 2015 and 2016 which is more than the P100,000,000.00 required and it has a land area of 105.49sqkm hectares which is also higher than the required 100 sqkm. The presence of these two requisites are enough to convert this bustling municipality into a city.” – An excerpt from Senate Bill No. 1825, An Act Converting the Municipality of Calaca in the Province of Batangas into a Component City to be Known as the City of Calaca. 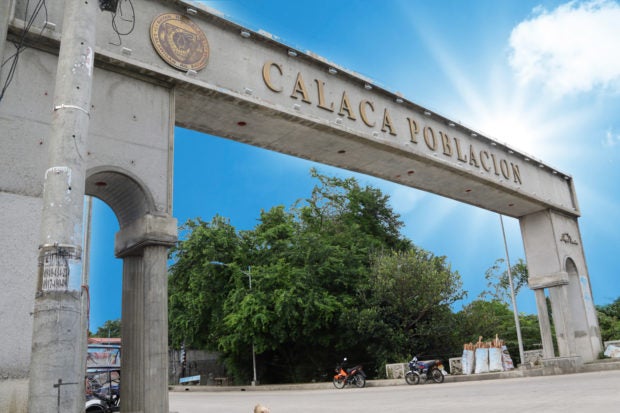 It was on May 26, 2021, when former President Rodrigo R. Duterte signed into law Republic Act (R.A.) No. 11544 entitled “AN ACT CONVERTING THE MUNICIPALITY OF CALACA IN THE PROVINCE OF BATANGAS INTO A COMPONENT CITY TO BE KNOWN AS THE CITY OF CALACA”. But the journey to cityhood before this was long and started during the administration of Mayor Sofronio Manuel ‘Boogle’ C. Ona. This advocacy continues during the administration of Mayor Sofronio ‘Nas” C. Ona, Jr. and with the support and guidance of Congresswoman Eileen Ermita-Buhain, it has gone through the required legislative process at the House of Representatives and the Senate of the Philippines before reaching the Office of the President. The last step of which is a plebiscite where the Calaqueños will now decide on its future.

The humble town of Calaca was established on May 10, 1835. It was once a barrio of Balayan located in the Western Part of Batangas along Balayan Bay. 187 years of existence shaped the identity of Calaca as a municipality, carving its mark in the country as a Power Town, thus emerging as one of the fastest growing local economies in Region IV-A. Hosting major power plant facilities and industries, the home of the Calacatchara Festival became one of the richest municipalities in the Philippines based on the 2018 Annual Financial Report on Local Government Unit submitted by the Commission on Audit.

Benefits of Becoming a Component City

Becoming a component city opens doors to a host of benefits. As a city, the local government enjoys fiscal autonomy as it no longer needs to remit any share of its income to the Provincial government. It also means a greater share in the National Tax Allotment (formerly Internal Revenue Allotment), thus increasing the budget of the city and all its 40 barangays.

Its charter also includes a moratorium which prevents an increase in any of its taxes for five years. Local officials assert that no increase is even necessary beyond that since its full share of the income derived from Real Property Tax, Professional Taxes, etc. will be sufficient to fund its expanded programs and projects. 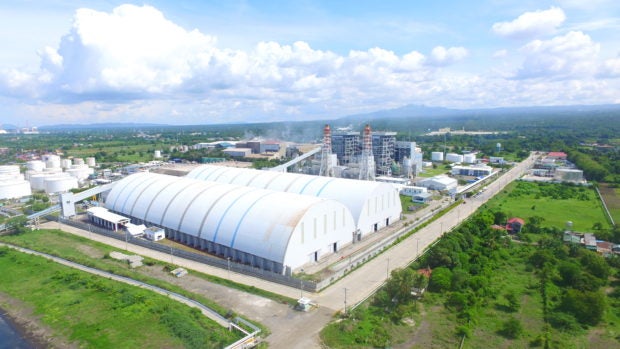 ​Additional funds signify the expansion of local government functions with the creation of mandatory offices required for a city government, such as the City Prosecutor’s Office, City Veterinary Office, City Jail, among others, which translates to faster and better services for the public. More so, the city government would have the capacity to accommodate national offices by providing office spaces and facilities.

This also means more appropriation to cater to more programs, projects, and activities of the LGU for social and health services, infrastructure projects, peace and order, livelihood, education, environment, and agriculture.

Becoming a component city would also boost local economic activities and attract more investors to set up their business establishments. It will help improve accessibility to public transportation, enhancement of the tourism industry, increased agricultural capability as well as industrial capacity. This in turn leads to better livelihood and job opportunities for all.

The LGU will also utilize the expected increase in its Special Education Fund (SEF) to sustain and expand more programs for education which includes a full scholarship program, provision of school supplies, capability building for teachers, sports development program, school buildings and facilities. Furthermore, there will also be an increase in its development fund for infrastructure projects such as roads, public buildings, street lighting, a centralized water system, etc.

Each barangay also stands to have a share in the Real Property Tax collection apart from the national tax allocation that it receives. Also, the city government will have additional resources dedicated to peace and order with state of the art equipment and facilities instrumental in keeping and maintaining orderliness.

Indeed, the collective journey of the Calaqueño community to become the first city in the western part of Batangas is now one step closer to reality. Considering the promising future the cityhood holds, it’s worth saying YES to the CITY OF CALACA!

No less than the construction magnate himself, Isidro A. Consunji, Chairman/CEO, of Semirara Mining & Power Corp., has big hopes for the City of Calaca as he has provided valuable support specifically in the development of a Conceptual Master Development Plan for the City of Calaca. Through consultation efforts provided by the Raralio Architectural, Planning and Design Services, they helped Calaca envision a plan that includes an Environment Management Plan which considers the various natural resources and other assets of Calaca which hails from its Comprehensive Development Plan and Comprehensive Land Use Plan. Corollary to this is an Ecotourism Master Plan (EMP) that seeks to develop the tourism potentials of Calaca as an important component of diversifying the agricultural and industrial economic base of the different barangays while conserving the environment and improving the well-being of all Calaqueños.

“We are pleased to be a partner to the development of the City of Calaca. We have always believed that Calaca employees, who are all Filipino, are very well equipped and very much capable in supporting our operations.” he said.

The President of the South Luzon Thermal Energy Corporation, Miguel Fernandez, has this to say about Calaca. “SLTEC is here in Calaca because we believe in the potential of this municipality. Now we believe more in its capability as a city that’s why we support the cityhood of Calaca!”

Ernesto Lorenzo Ladrido V, VP-Operations of Calaca Harvest Terminal Inc. also expressed support. “On behalf of all our business partners, employees, shareholders and stakeholders, I would like to congratulate Calaca on its cityhood and we would like to express our all-out support for the City of Calaca”.

Meanwhile, Atty. John De Castro, VP and HR Head of Atlantic Grains Inc. is not to be outdone. “On behalf of Atlantic Grains Inc, we would like to congratulate you in advance on your cityhood. When we decided to invest and develop our property in your place, it was a smooth sail since your local officials led by Mayor Ona, supported us. And now it’s time for us to support the cityhood of Calaca since it aims to improve the lives of its people. Congratulations and we are proud of you.”

Daniel Brian Joven, Head of Corporate Affairs, South Pacific Inc. has this to say. “We extend our support to Calaca’s bid for cityhood. We are witness to your various efforts that give importance to social, political, as well as economic capability. As an emerging center for economic growth, we believe that your contributions would be significant to support the growth objectives of our country. This will also give way to a more progressive community.”

Mandie Balba, Plant Manager of Steel Asia Manufacturing Corporation expressed his support as well. “On behalf of Steel Asia’s management led by our President and CEO, Benjamin Yao, we would like to extend our full support to the cityhood of Calaca. We are proud to say that we are part of this success. A success that will empower the livelihood of all Calaqueños. Congratulations in advance to Calaca City.”

The kind of partnership LGU Calaca has with industries can best be summed up with this message from Julius Jerry Aguas, General Manager of Phoenix Asphalt Philippines Inc. “Mabuhay and congratulations from all of us here at Phoenix Asphalt. Phoenix and the LGU of Calaca have always been a long-standing partner all throughout these years ever since we started its groundbreaking in 2018 up to the time our plant was constructed in 2019, and up to its full operations in January of 2020. We congratulate the LGU of Calaca in its upcoming plebiscite and we wish you all the best. We thank you for your support to Phoenix Asphalt Philippines.”

Mayor Nas Ona Jr. stresses in closing, “Now is the best time for us to become a City as we rise out of the after-effects of the pandemic in our ordinary lives. The boost that the cityhood would bring will clearly catapult our local economy in a positive way and hasten our recovery towards stability and further growth.” 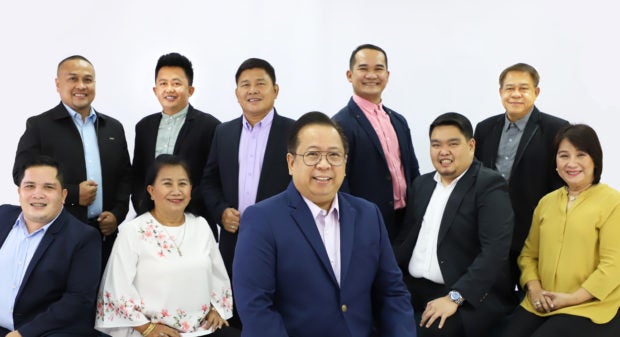 Calaca is all set for its new status as a city and is gearing up for a shining future with utmost confidence, strong focus and an intense energy that proves its power as the newest trailblazer in Batangas!