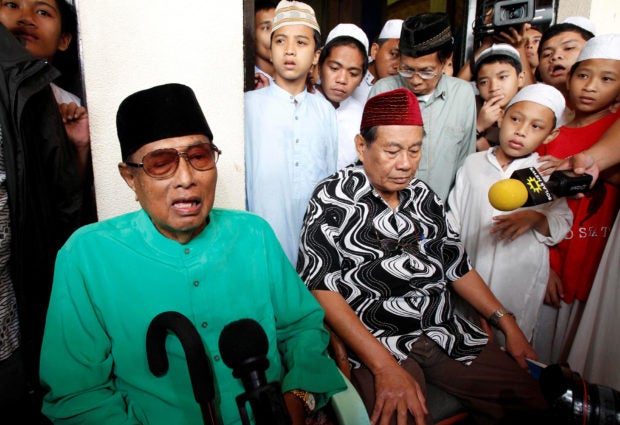 Jamalul Kiram III, a former Sultan of the Sulu region of the southern Philippines, answers questions as he sits surrounded by his followers, during a brief news conference in front of the Blue Mosque in Taguig city, south of Manila February 22, 2013. REUTERS FILE PHOTO

KUALA LUMPUR — Malaysia is scrambling to protect its assets as the descendants of the last sultan of the remote Philippine region of Sulu look to enforce a $15 billion arbitration award in a dispute over a colonial-era land deal.

In 1878, two European colonists signed a deal with the sultan for the use of his territory in present-day Malaysia – an agreement that independent Malaysia honored until 2013, paying the monarch’s descendants about $1,000 a year.

Now, 144 years later after the original deal, Malaysia is on the hook for the second largest arbitration award on record for stopping the payments after a bloody incursion by supporters of Sultan Mohammed Jamalul Alam’s heirs in which more than 50 people were killed.

“It is a fascinating and unusual case,” said lawyer Paul Cohen, a lead co-counsel for the sultan’s heirs from British law firm 4-5 Gray’s Inn Square.

For years, Malaysia largely dismissed the claims but in July, two Luxembourg-based subsidiaries of state energy firm Petronas were served with a seizure notice to enforce the award that the heirs won in February.

The arbitration ruling in France followed an eight-year legal effort by the heirs and $20 million in funds raised for them from unidentified third-party investors, according to interviews with main figures in the case and legal documents seen by Reuters.

Malaysia did not participate in nor recognize the arbitration – allowing the heirs to present their case without rebuttal – despite warnings that it would be dangerous to ignore the process.

The claimants, including some retirees, are Filipino citizens leading middle-class lives, a far cry from their royal ancestors of the Sulu sultanate that once spanned rainforest-covered islands in the southern Philippines and parts of Borneo island.

The heirs argue that the 19th century deal was a commercial lease, which is why they chose arbitration. They also claimed compensation for the vast energy reserves that have since been discovered in the territory they gave up in Malaysia’s Sabah state on Borneo.

Malaysia disputes that, saying the sultanate ceded sovereignty and the arbitration was illegitimate.

Malaysia has obtained a stay in France pending an appeal – a process that could take years – but the award remains enforceable globally under a U.N. convention on arbitration.

Malaysia honored the colonial-era deal until 2013, when supporters of the late Jamalul Kiram III, who claimed to be the rightful sultan of Sulu, attempted to reclaim Sabah.

Clashes erupted when about 200 supporters arrived in boats from the Philippines and lasted nearly a month.

Kiram, who claimed to be the “poorest sultan in the world”, was not one of the court-recognized heirs who received payments from Malaysia.

The eight claimants in the arbitration – including Kiram’s daughter and cousins – who received the annual payment have condemned the attack.

Up until the intrusion, the Malaysian embassy in Manila wrote a cheque to the claimants every year for “cession money”, according to cheques and correspondence from the embassy to the heirs and shared with Reuters by the heirs’ lawyers.

Malaysia’s then-prime minister, Najib Razak, told Reuters he had stopped the payments due to public anger over the incursion, acknowledging the reason publicly for the first time.

“I felt it was incumbent upon my duty and responsibility to protect the sovereignty of Sabah and the people of Sabah,” he said, adding he had not anticipated retaliatory legal action.

The claimants, through their lawyers, declined to be interviewed.

Cohen, the heirs’ lawyer, first heard of their claims from an oil and gas expert he cross examined in 2014 in an unrelated case.

Knowing they did not have the financial means, Cohen in 2016 brought on board Therium, a British firm that has bankrolled legal actions by raising money from institutional investors, including a sovereign wealth fund.

Therium conducted nine rounds of funding for the case, during which third-party investors repeatedly assessed its merits, said Elisabeth Mason, a lead co-counsel for the claimants with 4-5 Gray’s Inn Square.

The case has cost over $20 million, including lawyers and researchers in eight jurisdictions, she said.

“Investors don’t invest lightly in such matters,” she said.

Therium said it would continue to finance efforts to enforce the award. It declined to provide details.

The heirs notified their intention to commence arbitration in 2017 in Spain and initially sought $32.2 billion in compensation, according to the award statement.

Malaysia’s first response came in 2019 when then-attorney general Tommy Thomas offered to resume the annual payments and pay 48,000 ringgit ($10,800) in arrears and interest if the arbitration was dropped.

Thomas believed the demands were “absurd and ludicrous” but made the offer after colleagues advised him that it was “perilous” to disregard the arbitration as Malaysia’s foreign assets could be at risk, he wrote in a 2021 memoir.

The heirs rejected Thomas’ offer and the arbitration went on without Malaysia’s participation.

Malaysia successfully challenged the appointment of Gonzalo Stampa as the sole arbitrator in a Spanish court last year.

But Stampa argued in his award statement that the courts did not have jurisdiction over arbitration, and moved the case to France to deliver the award – actions that Malaysia says were unlawful.

Stampa is now facing criminal proceedings in Spain following a complaint filed by Malaysia. He declined to comment to Reuters.

By snubbing the arbitration, Malaysia is confined to arguing the procedural validity rather than making a case against the heirs’ claims, said N. Jansen Calamita, head of Investment Law and Policy at the National University of Singapore.

“It was a risky strategy and ultimately, I don’t think it has served them well,” he said.