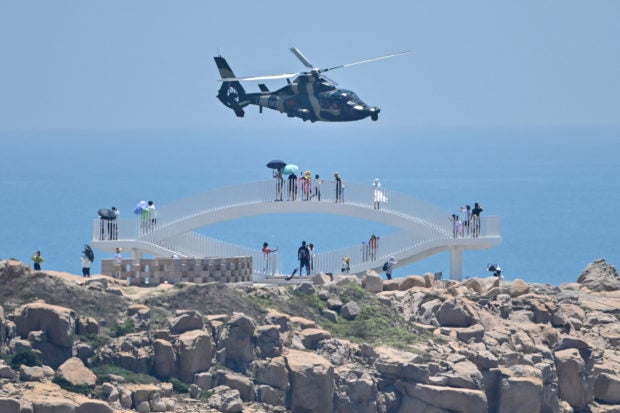 Tourists look on as a Chinese military helicopter flies past Pingtan island, one of mainland China’s closest point from Taiwan, in Fujian province on August 4, 2022, ahead of massive military drills off Taiwan following US House Speaker Nancy Pelosi’s visit to the self-ruled island. (Photo by Hector RETAMAL / AFP)

MANILA, Philippines — President Ferdinand Marcos Jr. should come up with a contingency plan for Filipinos in Taiwan should tension escalates in the island due to the actions of the United States (US) and China, the Makabayan bloc in the House of Representatives said on Thursday.

During an online briefing, Kabataan party-list Rep. Raoul Manuel read a statement from the Makabayan bloc condemning the US and China provocations in Taiwan following US House Speaker Nancy Pelosi’s controversial visit to Taiwan, a democratically-governed island that has declared independence from China

Makabayan also warned the US about using the Philippines again as a launchpad and transit zone for their Taiwan interests, considering that the country is just a few thousand miles away from the Philippines.

“These unsettling developments certainly do not bode well for the Philippines, which is a few miles south of Taiwan, and for Filipinos working in Taiwan, which are estimated at 160,000,” Raoul said.

“We urge the Marcos Jr. administration to come up with a contingency plan for Filipinos in Taiwan should the current situation escalate into a standoff. Likewise, we warn the US against using Philippine territories as launchpad and transit zones for further provocative actions,” he added.

The Philippine Department of Foreign Affairs called on the United States and China to act responsibly and avoid any miscalculation after Manila was placed on a delicate position due to rumors that Pelosi would use the Clark International Airport — a former US base — as a jump-off site before heading to Taiwan.

READ: PH calls for caution over Pelosi visit to Taiwan

However, monitors showed Pelosi arriving in Taiwan on Tuesday night using a route to the east of the Philippines.  Pelosi’s trip was in defiance of warnings from China, which has maintained that the small island southwest of the mainland is part of their territory.

The current US House Speaker, second-in-line to the presidency, is the highest US official to visit Taiwan in the last 25 years.

China condemned Pelosi’s visit, saying it is a threat to the stability of the Taiwan Strait region.  The US official, on the other hand, said her visit is a show of commitment from her side.

During an address before Taiwan’s parliament, she also thanked President Tsai Ing-wen for her leadership, hailing Taiwan as one of the freest societies in the world, but this earned China’s condemnation

Makabayan hopes these provocations between the two superpowers would end, especially as the visit has resulted in live-fire military drills in the region.

“We in the Makabayan coalition strongly demand an end to the provocative actions and aggressions by the US and China over Taiwan, which were punctuated by the surprise and full military ensemble visit of US House Speaker Nancy Pelosi to Taipei. In response, Beijing is now holding live-fire military drills in areas encircling Taiwan,” Manuel noted.

“Moreover, these provocations disrupt the peace and security in the Asia Pacific region, and could further lead to more military buildup and conduct of more military exercises by various parties in the region. Pursuing peaceful and diplomatic means to resolve standing issues should be the way forward,” he added.

PH calls for caution over Pelosi visit to Taiwan