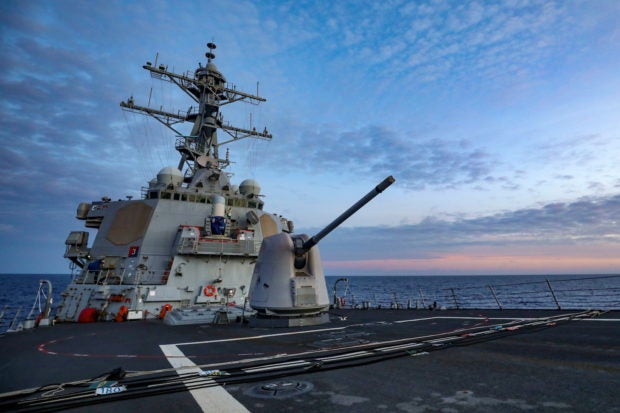 MANILA, Philippines — A United States warship on Saturday sailed near a disputed area in the South China Sea, the second “freedom of navigation operation” meant to challenge “excessive maritime claims” in the region since Wednesday.

According to the US Navy’s 7th Fleet, the Arleigh Burke-class guided-missile destroyer USS Benfold (DDG-65) merely “asserted navigational rights and freedoms” in the Spratly Islands, a major archipelago composed of more than 100 islands and reefs.

There was no immediate comment from Chinese officials on the latest sailing.

The Philippines has nine small military detachments in these waters, which it calls the West Philippine Sea, but China and other claimant countries have also maintained their own outposts.

Beijing has laid claim to the entire South China Sea, although in a case lodged by the Philippines, a 2016 international tribunal ruling invalidated its sweeping claims. Brunei, Vietnam, Taiwan, and Malaysia are also asserting their rights to these waters.

Saturday’s incident happened three days after China’s military said it expelled the same warship somewhere near the Paracel Islands, another archipelago being claimed by China, Vietnam, and Taiwan.

The 7th Fleet said that the latest “freedom of navigation operation” upholds “the rights, freedoms, and lawful uses of the sea recognized in international law by challenging restrictions on innocent passage” imposed by China, Vietnam, and Taiwan.

“Under international law as reflected in the Law of the Sea Convention, the ships of all states—including their warships—enjoy the right of innocent passage through the territorial sea. International law does not permit the unilateral imposition of any authorization or advance-notification requirement for innocent passage, so the United States challenged these requirements,” it added.

It also said that unlawful and sweeping maritime claims “pose a serious threat to the freedom of the seas, including the freedoms of navigation and overflight, free trade and unimpeded commerce, and freedom of economic opportunity for South China Sea littoral nations.”

Notwithstanding the Philippines’ strong military ties with many nations, including the United States, the officer in charge of the Department of National Defense (DND) is pushing for self-reliance in defense, an approach aimed at reducing the country’s dependence on foreign support for its military needs.

In the DND’s new strategic guidance, a document outlining the future direction and policy of the new administration, Undersecretary Jose Faustino Jr. said the third phase of the Armed Forces of the Philippines’ modernization program would focus on achieving a self-reliant defense posture (SRDP) that was “critical to our nation’s defense and security posture.”

He added that this would be achieved through the institutionalization of in-country production, transfer of technology, or other innovative arrangements in various procurement projects.

The Philippines, one of the weakest militaries in the region, first embarked on building its own defense industry during the time of President Ferdinand Marcos Sr. in the 1970s but lost its momentum over the years due to several factors.

Faustino, who will become defense secretary in November after the one-year appointment ban on retired military officials, also pushed for the SRDP policy during his short stint as AFP chief of staff last year “to protect the country’s interests from foreign control and promote limited dependence and outside support for our defense requirements.”

The Revised AFP Modernization Program (RAFPMP), which started under former President Benigno Aquino III in the wake of Chinese aggression in the West Philippine Sea, would enter its third phase starting next year until 2028.

During this stage, the AFP hopes to become “fully mission-capable” to defend the country’s territory by acquiring maritime patrol aircraft, ground-based missile systems, and additional trainer aircraft, among others.

The second phase, which envisioned a “minimum credible defense posture in the West Philippine Sea,” started in 2018 and would end this December. It made allocations for the purchase of multirole fighters, offshore patrol vessels, corvettes and light tanks.

Funding issues, however, remain the biggest hurdle in implementing the modernization program.

As of May this year, AFP data showed that under phase 2 with a total of 102 projects worth P432 billion, only 13 projects worth P29 billion had been completed, while 89 projects were still “in various stages of implementation.”

There are 259 planned projects for the third phase of the modernization program with nearly half or 125 projects meant for the Philippine Navy.