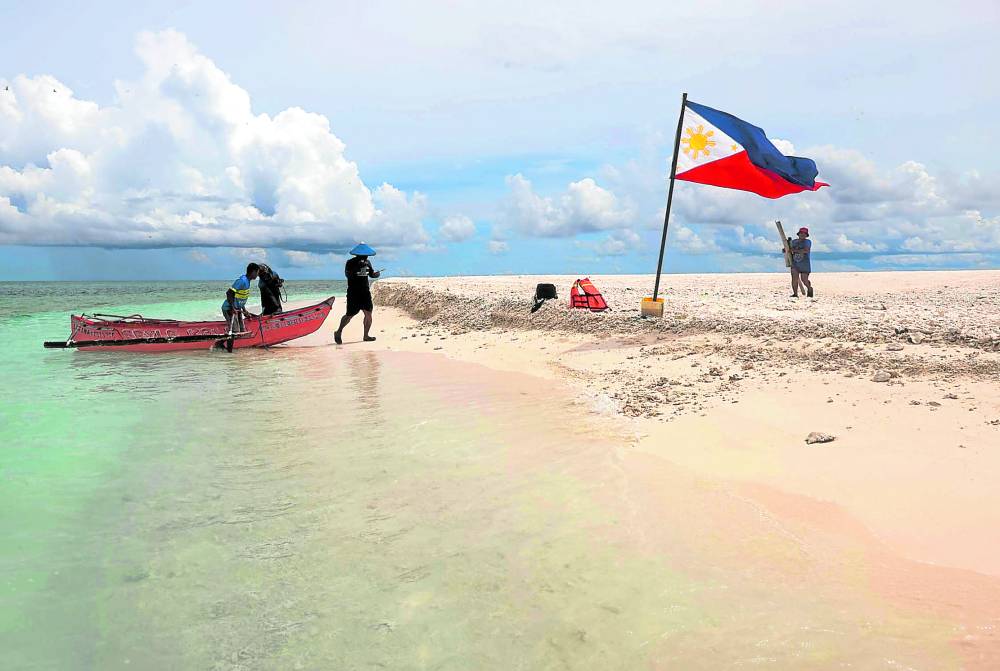 RAISE THE FLAG Members of the Philippine Navy plant the Philippine flag on one of four sandbars rising from the sea within the territorial waters of Pag-asa Island, part of the Kalayaan municipality in the West Philippine Sea. China claims the sandbars, sending its coast guard to keep Filipinos away from the emerging islands. —MARIANNE BERMUDEZ

PAG-ASA ISLAND, West Philippine Sea—A string of sandbars near the Philippine-occupied Pag-asa (Thitu) Island is becoming another flashpoint in the maritime and territorial dispute between the Philippines and China in the South China Sea.

The Chinese have for years maintained a constant presence close to the sandbars to keep Filipino troops and fishermen away despite the fact that the emerging islands are located well within the 22-kilometer territorial sea of Pag-asa, which is part of Palawan province’s Kalayaan municipality.

China’s aggressiveness in these waters were on display in an incident witnessed by the Inquirer late last month when a China Coast Guard (CCG) vessel tried to stop Philippine patrols around Pag-asa and the sandbars.

“By keeping our people away from the sandbars, the Chinese are able to limit the activities of our people practically on the island itself,” maritime law expert Jay Batongbacal told the Inquirer.

It is the same tactic the Chinese are using in tightening its grip around Ayungin Reef (Second Thomas Shoal) where BRP Sierra Madre, a World War II-vintage landing ship, serves as one of the military’s outposts in the West Philippine Sea off Palawan.

Sandbars naturally emerge above the water’s surface over time, unlike the artificial islands built by the Chinese whose foundations are largely crushed corals, rocks and sand excavated from the seabed.

These are high-tide features which generate their own 22-km territorial sea, according to the United Nations Convention on the Law of the Sea.

In the June 27 incident, a CCG vessel with bow No. 5201 tried to drive away two Filipino patrol boats between Pag-asa and Zamora (Subi) Reef, one of China’s artificial islands about 26 km away.

“Attention, Philippine personnel. This is China Coast Guard 5201. Your behavior not only violated China’s sovereignty, safety and relevant rights but also … of the relations between China and the Philippines. Please leave at once,” the ship warned in a radio call to the patrol boats.

The Chinese also deployed a Z8 transport helicopter from its base on Zamora. Flying low, about 30 meters above the water, it circled the vicinity of the sandbars several times before heading back to its base.

The ship approached Cay 1, where one of the two patrol boats had anchored for an hour. It sounded warning sirens while repeatedly radioing the Filipinos to leave. It could not come closer than 1 km from the sandbar because of the reef’s shallow waters.

The Filipinos radioed back saying: “This is Naval Station Emilio Liwanag. We are currently conducting maritime operations within the territorial waters of Pag-asa, Philippines. Please do not interfere.”

“They do that all the time whenever we patrol,” one of the military personnel told the Inquirer.

While there was only an exchange of radio messages and deployment of a chopper, the incident offers a glimpse of Beijing’s capability to strike and escalate tension if and when it wants to.

In addition to the CCG ship, there were around 20 Chinese maritime militia vessels southwest of Pag-asa. These vessels pose as fishing boats but actually aid actions by China’s coast guard and navy. They have been present near Pag-asa since 2018 when the government started constructing a beaching ramp and making other upgrades on the island.

“They’re just there but it does not affect our lives. But they have encounters with our fishermen,” said Nenita Bania, a resident of Pag-asa. The Chinese coast guard have harassed fishermen from the island.

Cay 1, located 3.7 km from Pag-asa, is in direct line of sight from the island’s port. Batongbacal said.

“The sandbars are closer to fishing grounds and served as resting and safe anchorage places for fishermen based on Pag-asa,” he said.

He said the sandbars allow Filipinos to fish at the underlying reefs about 11 km to 14 km from Pag-asa.

“Take those areas out of reach and we are basically limited to around two nautical miles (3.7 km),” he said.

The presence of Chinese vessels also potentially threatens aerial access to the island as the other three sandbars are located along the western path or approach to Pag-asa’s 1.2-km runway, he added.

The Philippines tried to build a shelter on Cay 1 in 2017 but stopped after China protested, citing an agreement not to occupy new features in the South China Sea.

The Philippine Navy is also beefing up its forces in the West Philippine Sea and redeployed this week a former Hamilton-class cutter, which it had acquired from the US Coast Guard.

The BRP Andres Bonifacio (PS-17) returned to duty on Wednesday after undergoing repair and maintenance over two months.

“The return of PS-17 will definitely strengthen our requirements in the West Philippine Sea,” said Vice Adm. Alberto Carlos, commander of the military’s Western Command (Wescom) based in Palawan.

The 115-meter ship has a cruising range of around 22,400 km with a speed up to 28 knots. It is armed with 76-mm automatic cannons, light cannons and .50-caliber machine guns.

The ship secures the service contract areas of the Department of Energy and two oil platforms northwest of Palawan.