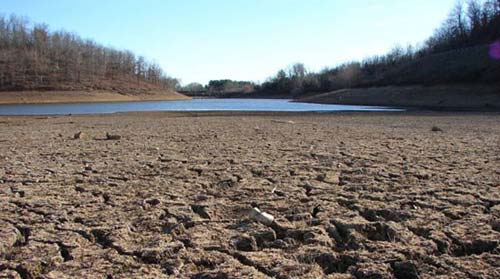 The image of drought is seen in this photo. FILE PHOTO

More than half of the Filipino respondents in an online poll said they were interested in news about climate change and believe that media should take a stand when reporting on the issue, according to a global study on news consumption trends.

The results of the 2022 Digital News Project of the Reuters Institute for the Study of Journalism (RISJ) and the University of Oxford released on Wednesday showed that interest was highest in several Latin American, Southern European and Asia-Pacific markets.

The Philippines—an archipelagic country especially vulnerable to climate-related disasters—topped the Asia-Pacific market with 52 percent of respondents saying they were drawn to stories on climate change.

This was also the trend for more than half of the participants in Greece (53 percent), Portugal (53 percent) and Chile (52 percent).

In contrast, interest was lower in more developed countries like Canada (39 percent), the United States (30 percent), most of Western Europe and United Kingdom (42 percent), which led the global talks on climate change last year.

Craig Robertson of the RISJ said the high numbers could be because audiences “appear to be more interested in and pay more attention to climate change news in places where the negative effects are felt more acutely.”

According to him, audiences “express more interest, pay more attention to climate change news, and feel more inclined to support journalists taking a stand in places where the direct impacts of climate change are acutely felt.”

But Robertson said that if “the very visible manifestations of climate change—fires, floods and droughts—are what draw attention, this raises a problem in itself. Action—and, therefore, credible information to inform it—is needed before disaster.”

The study also discussed challenges and opportunities in climate change reporting, which could often be difficult to understand aside from being depressing for audiences.

It noted that interest in climate change news was higher in countries where there was less political polarization, with many on the political right ignoring such reports.

As a result, Robertson said that newsrooms must figure out how to engage this audience segment “particularly if conservatives view climate change as a politicized issue of the ‘left’ and disfavor newsrooms taking a stand.”

The study also found that most people across the world prefer to consume climate change news via documentaries (55 percent) rather than major news organizations (35 percent).Robertson attributed the wide appeal of environmental documentaries to their clear stories and engaging visuals. He said that these narratives help audiences connect with what is a very large and sometimes abstract story—while not necessarily being ‘political.’”

Another finding was the public’s growing preference for news outlets to take a clear activist stance on environmental issues, with a large number of respondents in the Philippines (42 percent), Portugal (48 percent) and Chile (58 percent) saying that journalists should advocate change. But for Robertson, while taking a clearer stance may be one way to increase interest or attention, “doing so risks running up against journalistic norms of impartiality adopted in many countries.”

Commissioned by the RISJ, the 2022 Digital News Project was part of a broader survey that sought to understand how news was being consumed across the world. Around 93,000 respondents from 46 markets were polled online between January and February.

The samples numbering around 2,000 per country were chosen using nationally representative quotas for age, gender and region in every market. Education quotas were also applied in all markets except in several countries, including the Philippines.

The economic imperative to act on climate change